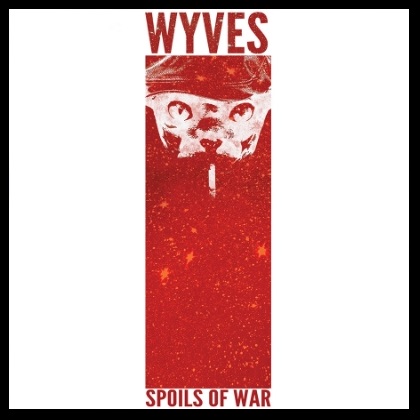 I’ve said it before and I’ll say it again, there just isn’t enough rocknroll in rocknroll these days. Too much of contemporary music that is termed “rock” is toned down by other influences, like indie or Americana. What happened to good ol’ fashioned, ass-shakin’, barroom rocknroll? It’s right here on Spoils of War from the Phoenix four-piece known as Wyves.

The opening track, “Jump into the Water”, brings energy from the get-go with its driving guitars and whiskey scratch vocals. My personal favorite oscillates between the slinky “Bad Reputation” and the title track which has a (dare I say?) Mellencamp feel.

YabYum: Where did you record the album?

We recorded the album in between our houses with Ryan King at the board. Once we had all the music tracked we finished off vocals and mixing with Curtis Grippe at STEM recording.

It feels like Wyves has become a staple on the local scene for some time now, but it looks like you played your first show in June of last year. I guess I’m just carrying over some earlier musical associations of Wyves’ members. What are some of the other acts the bandmates have played with (or do play with)?

We definitely all had some connections and built in fans from other projects. Corey was a part of and still plays with Dry River Yacht Club and Brenden and I were the rhythm section of Sara Robinson & The Midnight Special. Quite possibly the best previous experience is that of Nick Sterling. It’s crazy how many people of the current AZ local scene don’t know how much he has done. He has been on stage with Aerosmith, Kid Rock, Peter Frampton…the list goes on. He wrote an album with Sebastian Bach and toured the world with him, hitting dates with Guns N’ Roses along the way. He has seen and done so much at a young age. We have a great group of experienced players, personalities and friends with Wyves.

Is there a priciple songwriter in the band? Or do you usually hash out the tracks as a team?

We all like getting together and putting in our ideas when it comes to song writing. On Spoils of War there were a couple of tunes carried over from Corey’s song bank that we tweaked a bit. Usually someone will bring a riff or verse chorus idea and we will either take off with it or restructure it so it becomes the way we all feel best. In my opinion having everyone involved is the best way to write. If you have a hand in creating it instead of just being handed the song finished, you will be more passionate about it.

Wyves certainly plays out a bunch. Do you feel the new album captures the spirit of the live Wyves experience?

Spoils of War certainly has great energy, which is what our live show is all about. Minus a couple of keyboard parts, on this album you are hearing exactly what you’d be hearing live.

Considering the band has yet to get a full year under its belt, you’ve been included in some rather impressive lineups including festivals like McDowell Mountain Music Festival and Apache Lake Music Festival. Any favorite live performances or really stand out shows to date?

To me the most standout show of the past 9 months would have to be our CD Release Show at Crescent Ballroom. We went in on cloud nine hearing how many pre-sale tickets we’d sold and halfway through the show we were told of it being Sold Out. I remember walking out to that stage and feeling everyone’s incredible energy that night. We really have been lucky with the support and opportunities we’ve been given for our relatively young band age. But we take those opportunities and use them to their full advantage. You gotta earn those spots by bringing everything you have.

Can you tell me a little bit about Wyves’ 2016 plans? Tours, music videos, etc?

This year has a lot in store for us. We plan on releasing 4 music videos for this album, one of which is already out and the second is being shot in April. We are very much wanting to tour and hit some of the West Coast markets. We are always on the lookout for big Arizona show opportunities and national band shows where we can get in front of some new faces. With all of that craziness going on, we also plan on fitting in some time to start writing some more songs and growing our sound.

Make sure you check out Spoils of War from Wyves (available here). I also highly recommend getting out to see this band live. They will be performing this weekend (4/9) at the Rogue Bar in Scottsdale and again on 4/15 at the Yucca Tap Room in Tempe. More information about Wyves’ Upcoming Shows can be found here.