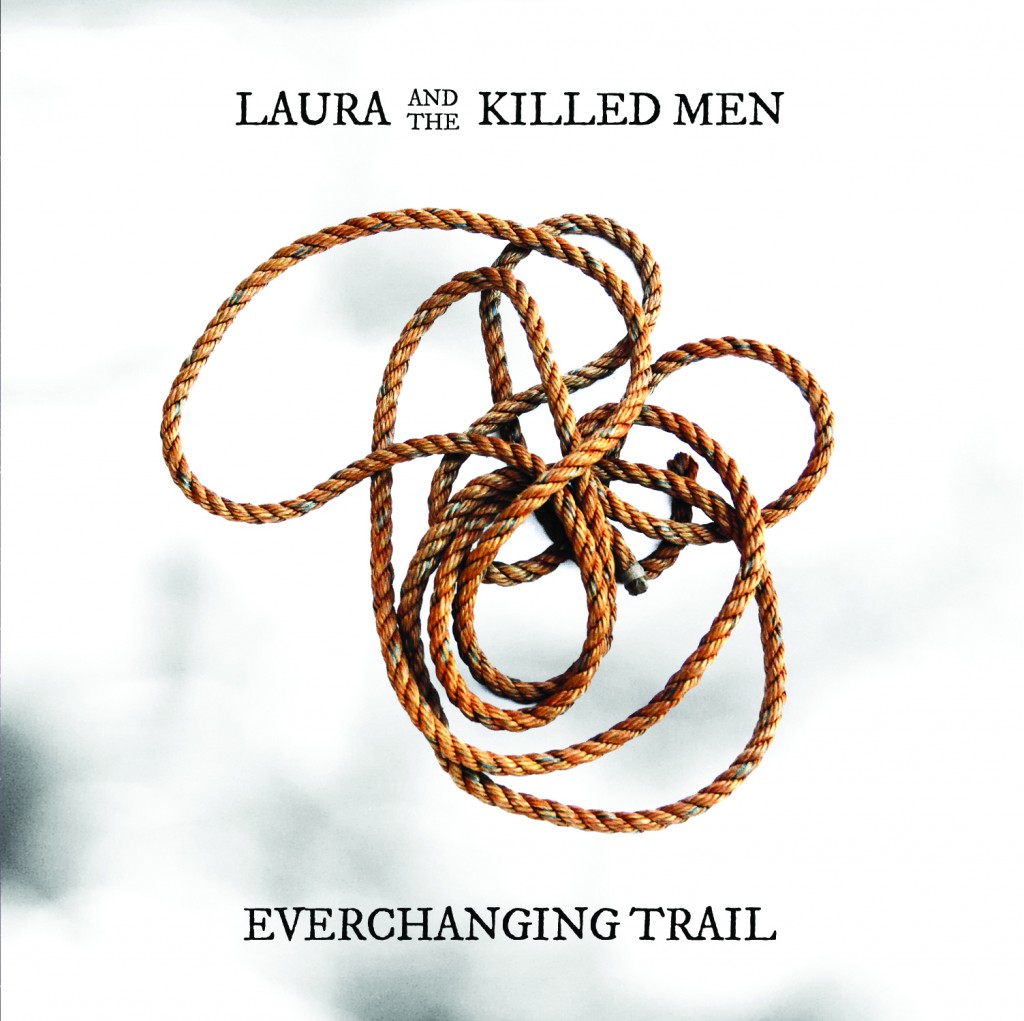 I’ve been enchanted by the vocal stylings of Laura Kepner-Adney for years now (proof here) so the emergence of Laura and the Killed Men with their debut EP last year caused considerable stir down at YabYumHQ. The band recently completed their follow-up effort, Everchanging Trail, due out for release later this week and fans will not be disappointed.

Laura and the Killed Men crafts a harmony-rich Americana that harkens back to a bygone era without sacrificing modern relevance. Their latest collection, featuring eleven new tracks, was largely written from the road while the band explored the nation on tour. Yet, throughout Everchanging Trail, the band’s westerly roots can be heard in the slide guitar and country sonority.

The release show for Everchanging Trail happens this weekend (4/15) at Club Congress in Tucson followed by a Phoenix appearance at Valley Bar (4/20) next week.

I had a chance to ask bandmates Laura Kepner-Adney and Sam Golden some questions about the new album, the band’s songwriting process, and what’s next for Laura and the Killed Men…

YabYum: The title of the new album seems particularly apropos given the changes in both lineup and sound. I’d like to talk about the lineup changes first. Are there new players amongst the Killed Men?

Laura: Everchanging Trail refers more to the proverbial cultural and ecological path of the country. Yes, the band is undergoing a personnel change, with Bjorgvin Benediktsson taking over bass and vocals duties for Bob Hanshaw, but the album title was only coincidentally self-conscious. The title of the album is the title of one of the songs we wrote on last summer’s 12,000 mile tour across the country. Our drive across such a culturally and geologically diverse landscape inspired the lyrics. We incorporated voices of travelers from the past and present, with a little forewarning for the future, given the ecological cliff we’re nearing.

Sam: It’s easy, and extremely destructive, to become lulled into thinking anything will always be a certain way. It’s a painful slap in the face and a profound comfort to remind yourself of the impermanence of things.

Next, let’s discuss the changes in direction, musically speaking. One Bell, the debut EP from the band has a distinctly vintage musicality. There’s something romantic and old-fashioned in the sound. The new album doesn’t lose these qualities but there is maybe a little more country, even gospel, on the new release. Was there an intentional shift in direction? How do you feel your sound has evolved?

Laura: The biggest difference between the previous release and this one is the shift to collaborative songwriting.  Every track on the album but one was a co-write (most between myself and Sam, and one between all the band members).  We wanted to maintain the story-telling aspect of Americana, but the songwriting skewed–as you mentioned–significantly more country, less psychedelic.  It wasn’t an intentional shift, and I don’t think I even realized it had happened until we were mixing the album and listening to every track in succession.  It was like, “Oops, we made a country record.”

Where did you record Everchanging Trail? Were there other artists, in addition to the band members, that appear on the recording?

Laura: We recorded and mixed the album at Waterworks Recording with Jim Waters here in Tucson. Working with Jim is always a pleasure, and there’s something about that studio. It’s full of 1970s ephemera: black velvet paintings, teak sculptures, old cuckoo clocks. Something about that environment inserts itself into a recording; makes it feel richer and deeper. It’s a special place.

Sam: We have a couple of great cameos on the album– Kevin Mayfield (Of the rootsy Tucson band Miss Lana Rebel and Kevin Mayfield) plays musical saw on “Winter in Her Teeth”, adding some unearthly strangeness to an already deeply weird and borderline-sinister song. Marco Rosano (of Y la Orkesta and myriad other musical projects around Tucson) provides a really tasty clarinet part to the New-Orleans-jazz-tinged dirge “Heaven’s Daughter.”

There is definitely a desert feel to the music of Laura and the Killed Men that completely enamors me. Do you feel your location has had a strong influence on your sound? And, if so, how?

Laura: A LOT of these songs were written on the road. “Caroline” we wrote in a barn during a rainstorm in Colorado; “Heaven’s Daughter” came from a melodic seed that started in North Carolina and we finished in Kentucky; “Everchanging Trail” we wrote on the road in New England. Beyond that, the songs we wrote in Arizona are largely about other places: Pocatello Son, Boston, World’s Fair Hotel. It’s comforting to hear that you felt a stylistic-thematic unity throughout the album. The desert plays strongly in our aesthetic, and I’m glad to know it came across despite the geographical spread of the songs.

Sam: In addition to physical geography, we jump around the American timeline as well. Many songs began with a purposeful attempt to capture a certain musical era– usually a geographically specific era: 19th C. Sacred Harp choir singing; c.1970 Gram Parsons country-rock; c.1920 New Orleans jazz; etc. However, we didn’t want just to faithfully recreate music from these eras– rather, we wanted to find what makes this music still reverberate so strongly with us, here, in 2016, and to recast that in the mold of the present day. This conversation between past and present is made explicit in “Everchanging Trail”, as Laura already mentioned. And I think– or at least I hope– what holds the album together is that unifying lens of Arizona in 2016, despite the myriad locations and years we view through that lens.

The music has such an orchestral quality, really sweeping at certain moments. Can you tell me a little about the band’s songwriting process? Is one person mainly responsible for lyrics and/or melody and the rest of the band fills in the rest? Or do you work together from start to finish?

Laura: Sam and I split songwriting duties on almost every song on the album. We’d come to each other with a lyrical or melodic fragment and work it out together from there. We did a TON of writing in the car. I was shocked at how productive we were while driving. We would just decide to write a song before we got to the next location, then follow through.

Sam: When you’re driving like 6 hours a day for two months you gotta pass the time somehow. I-Spy got old around the second week. So we wrote an album.

Laura: We have plans!  We’re releasing the album on April 15th, then doing a 3-week promo tour for the record. Our first stop is in Phoenix, at Valley Bar, on 4/20 with locals Huckleberry and Cisco and the Racecars (more info here). The tour will take us up as far north as Arcata, CA, and east to Austin.  Then this summer we’re headed up to tour in Alaska for a few weeks.

We’ve got one music video ready for premiere and one in the works right now.  We also just did a fun collaborative writing/recording/video project with Raven Sound Studio in Prescott, AZ in which we wrote, recorded and made a video for a song in 24 hours.

If you’re in the Tucson area, head out to the release of Everchanging Trail from Laura and the Killed Men at Club Congress on April 15th (more info here). For those of us in the Valley of the Sun, we have to wait until April 20th when the band performs at Valley Bar (info). Now check out their brand new video for “Pocatello Son” below!