Brandon Decker is the master of ceremonies that presides over the band decker. The act, centered out of Northern Arizona, keeps busy between extensive touring and recording endeavors. In 2015, they released Patsy, an album of resounding beauty and a staff favorite that also earned the band our award for “Most Likely to Succeed”.  This year shows no slowing down for decker. Right now, they are gearing up for the Record Store Day release of their live album amid the chaos of recording their next LP, Snake River Blues.

Nevertheless, Brandon Decker took time out of his schedule to answer questions about the live album, their next recording effort, and the band’s forthcoming residency in New York. But, first, we’re excited to share decker.’s new music video featuring a track off their Record Store Day release, Last Exit Live.

First, the nitty gritty. Where did you record the live album? Who helped capture the live sound and produce it?

The live album was done at Last Exit Live and is non-coincidentally named Last Exit Live. Brian Stubblefield mixed and engineered it. He did an excellent job and we’re super happy with how it turned out.

I do like vinyl. I was born in 1980 and grew up in the tail-end of the vinyl era. I had many, and still have most of them from my childhood. Mostly classic rock and stand-up comedy. My mom has crates and crates of them too. As it has returned to the forefront in society, for me, it was really making the Patsy vinyl last year that impressed upon me what a tangible entity they are. A ton of work and time goes into them and they’re so much more energetically focused than a CD.

Any favorite records stores? Do you have a spot that you personally haunt?

I mean, we all love Zia and Stinkweeds. I’d say I mostly buy records from bands at shows though.

Tell me about the new video. This looks like the work of a certain Mr. Steinkamp. if I’m not mistaken?

This is indeed the work of Matty Steinkamp. It basically captures this chain gang moment we did at our live album recording but is a bit of a montage from some other shows and recording. We wanted to do something that wasn’t a cinematic type thing, but more to capture what the energy live looks and sounds like. If you know us, then you know that we play quite a few of shows and quite a few on the road so we wanted to get a video that kinda put that vibe out for people to see.

Now, the track you’ve selected for the video – “Speak in Tongues + Cellars” – is a live favorite. I’ve enjoyed quite a few decker. shows so I’ve heard this song uncounted times, but each show it’s a little different. Much like the live decker. experience, it’s constantly transforming. What was special about this live performance of “Speak in Tongues + Cellars”? I am assuming (and let me know if I’m wrong) that this was taken from the live album you recently recorded.

Well, we’ve never actually done it quite like this. This is a song from our 4th album, Speak in Tongues, that we don’t really play anymore. When Kelly (Cole) was in the band we had talked about doing this chain gang version of it and it just so happened that, years later, this show was the right time for it. Then we go into the middle third of our song “Cellars” – which is the one you are familiar with. But, yes, this is from the live album recording. 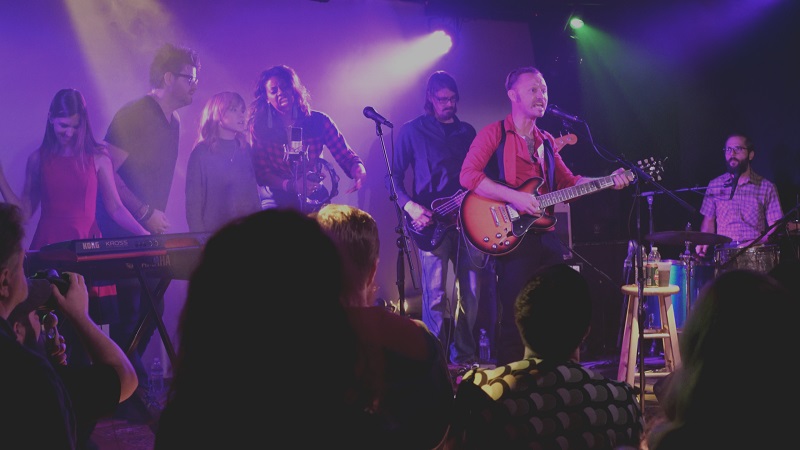 As previously mentioned, the band has been known to change shape and players. Tell me a little bit about how this affects
the live experience that is decker.?

Well, it means sometimes there are some extra missed notes. No, you are correct in that we play with many people. Now, I don’t want to sound at all defensive but I get somewhat frustrated with what a talking point this seems to be in Phoenix. That said, I want to play with as many lovely, talented, quality people as I can. And I want to play with people who understand and believe in my vision – it can’t work any other way in this project.

With Snake River Blues, decker. will put out our 6th studio album in 7 years. I play roughly 150 shows a year. The entire act has always been constantly evolving from the the days we used to busk in Santa Cruz several times a month to having Kelly standing up playing two floor toms while playing a guitar on a stand with a drum mallet because some drummer quit mid tour to the various different lineups we will feature this month. I’m constantly playing, touring, writing, learning, and growing. Sheer logistics and full immersion for me seemingly mandates that I work with a lot of personnel.

In many ways, it’s a blessing. We get these fresh energies and perspectives constantly. In some ways, its a curse. I’ve spent countless hours driving around Arizona chasing rehearsals and sometimes we have shows that don’t come off as tight as I’d like. But overall, I’m eyes-on-the-prize all the time and I think we’ve done a fine job of persevering while other more traditional, “stable” band lineups have come and gone because their very structure was forced to be some specific group of people.

Who took part in the live album recording?

Speaking of wonderful people. For this show, we assembled almost entirely of people we’d never played with. It was Amber Johnson and myself. Then we had David Moroney, a musician whom I admire a great deal, on drums and Mike Upsahl on bass. We had a choir with Taylor Upsahl, Camille Sledge from PAO, and Matthew Thornton from Vinyl Station. Then we had Mark Allred and Jayson James from The Haymarket Squares. I respect the talents of all these people so much. It was a real honor to have such a group of people that night.

Why did you select Last Exit Live to record this album?

They have really become our favorite venue to work with in Phoenix. They want to foster an environment which feels like family and are super appreciative for all their shows and really artist-friendly in every way. Aside from that, Brian, the sound engineer, takes great pride in his recording setup and knowing the room. Its also a destination spot rather than scene spot and that was invaluable in keeping the chit chat at a minimum while we recorded.

What is in store for you next? Where are we in Snake River Blues?

We record Snake River Blues starting next week at Flying Blanket Studio in Mesa with Bob Hoag. And its all things towards the album release in New York from there.

Word has it, you are going to be doing a residency in New York later this year. Can you tell me a little bit about that?

I spent 18 weeks on tour for Patsy last year and was pretty ravaged. I wanted to come home and rest and think of what the next move would be. Very quickly, it was to write an album called Snake River Blues and try to get a residency at Rockwood Music Hall in New York. We’re super excited. I had never been to New York until last year and we had two shows there which both went quite well. While there I kind of bemoaned never having an opportunity to live there, so this is my answer to that. But, truly, this is the biggest thing I could think of to do with my year.

Record Store Day draws near. How will you be spending it?

Funny enough, April 16th is our first day in studio. So, we will begin recording the album. Then we will rush over to Zia for an in-store to promote the live album then off to Lost Leaf for a show with Huckleberry and Mr. Mudd & Mr. Gold – a true decker. day!

Any additional chances to encounter the live decker. experience on the horizon?

Well apart from the Lost Leaf show we are also at Rebel Lounge with Small Leaks Sink Ships on Saturday April 30 and Last Exit Live on Friday May, 20 for a big one!