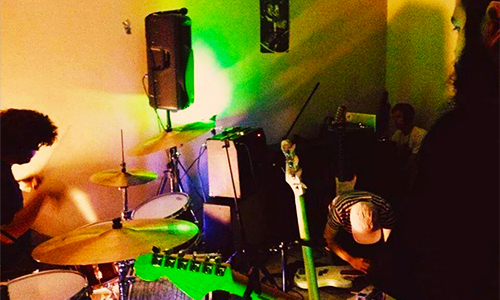 All photos courtesy of Roddy Nikpour

Continuing his series “An Insider’s Introduction”, Mark delves into the person and persona of Roddy Nikpour, a man of many talents. In addition to the brooding, instrumental orchestrations he helps create under the moniker -ghost island-, Roddy also moonlights as a dancer in the experimental musical endeavor known as Treasure Mammal. Mark talks to Roddy about music, destroying personal bubbles, teaching latin, and what’s next for -ghost island-.

Mark Anderson for YabYum: How long have you lived in the Phoenix-Valley area? When did you become involved with the music/art scene?

Roddy Nikpour: Despite briefly living in Utah and Maryland as a child, I was born and raised here in Phoenix, specifically in Ahwatukee, where nothing exciting ever happened. When I moved to Tempe in 2011 and decided I liked “real” music, I started volunteering for KASC the Blaze 1330 AM, where I gained a more appreciable taste for music, and I attended a lot of house shows. That was my introduction to the scene as an outsider, but performing as a soloist and with bands has also helped me to network with bands and organizations who make the scene what it is.

Were you in other bands before ghost island?

RN: Before -ghost island- (as it’s stylized), I started a band in 2010 called Anchors, later renamed Ursus Colossus, with my best friends from high school. That was my first venture into composing instrumental music, and I aimed very distinctly to emulate well-known bands like Explosions in the Sky, but I have branched out since then. We wrote two albums and one EP, played many shows, and just had fun. With the pressures of school, and not to mention the fact that our drummer moved to Flagstaff, it became increasingly difficult to organize practice sessions.

Through the connections I made in the scene, I was fortunate enough to meet John Romero, who was in his own band called Cassiopeia, which had just broken up. At this point in late 2013, he told me he needed a live guitarist for his solo project, which was -ghost island-. It then flourished into the collaboration that it is now, and could rightfully be called a “band”, rather than just his project. All this time, of course, I have also partaken in composing soundtracks for student and independent films. 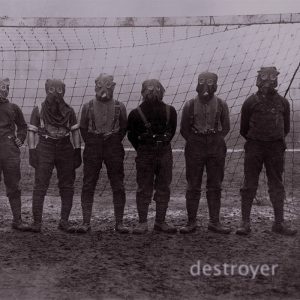 I’ve always loved instrumental bands/music but have never been in one, what compels you and your bandmates to connect with an audience on a purely musical basis? It’s quite like an orchestra really…

RN: Writing and playing instrumental music is one of the most liberating activities to me. My greatest motivation–besides the fact that I cannot write lyrics without them sounding like a nursery rhyme, unless they are composed in Latin, which nobody would take seriously anyway–is that music without lyrics can mean anything to anyone at any time in their life. When I write a riff, it might be about a specific idea in that moment, but something totally different to me based on what I’m dealing with on stage. The same applies to the audience. So, when -ghost island- performs for an audience, in some ways, it’s less about engaging them explicitly, and more about the implicit immersion they feel: physically, with loud sound, and emotionally, with ambient melodies. Even if we don’t often look at the audience, we do hope our listeners walk away from live shows with a genuine emotional stimulus, because that’s what instrumental music has always been about: conveying raw emotion.

When and how did you join the ranks of Treasure Mammal? Please describe what you do for the band.

RN: Meanwhile, in the world of explicit (and expletive) engagement, I seamlessly jumped on board Treasure Mammal in 2014. After attending enough shows as an audience member, Abe [front man of the group -Eds.] finally asked, “Why don’t you just be a part of the band?”, to which I replied, “Why the hell not!” Needless to say, it’s almost an exact opposite experience to -ghost island-; I contribute nothing musically to Treasure Mammal, and it’s goofy as hell.

Alongside several other talented individuals, I am one of the token dancers, forcing people to abandon whatever spacial bubble they established that evening. Yet, the commonality between these projects is that they elicit emotional responses in two totally different ways. While -ghost island- is very brooding, causing one to become introspective and ponder themes like mortality, Treasure Mammal focuses on the joys and sorrows of the everyday human experience, rejoicing in what little meaning we find in socializing despite the hollowness of the universal void. And I think that’s neat. Plus, who doesn’t want to let their inhibitions go by wearing spandex in front of an audience?

How about your role in Radio Phoenix, when did you start volunteering with them? Is a future in broadcasting on your horizon?

RN: As I mentioned, in 2011 I began getting involved at ASU’s student-run station, KASC the Blaze 1330 AM, where I unearthed a passion for radio broadcasting – everything from hosting a show to working behind the scenes. I love the technical side, and it’s an awesome medium for sharing art and conversations that matter. I rose through the ranks, interned at KJZZ, and decided I needed to keep doing it; doing radio is the one activity wherein I hardly notice time passing, my stomach growling, and my bladder pulsing, which is to say, I get entirely too immersed in it.

Upon graduation in 2015, I couldn’t lock down a radio job, so I decided to spend the year teaching Latin until something came about. That’s when I started volunteering for Radio Phoenix, where I continue to learn more and more about the world of broadcasting. Having been a recurring face at the station and expressing a desire to produce shows, I began producing My Word of Music with Walt Richardson and Soul Deluxe, two nationally-syndicated shows from our studio. From these efforts, I was volunteer-promoted to the title “Associate Producer of National Programming”, complete with an email address and everything! The goal is to actually make a living doing this kind of thing, which I admittedly once thought was becoming obsolete, but then realized it would always be around in some form or other. Either way, I’ll always have my podcast, The Post Office, which features two hours of ambient, mellow, instrumental post-rock music! 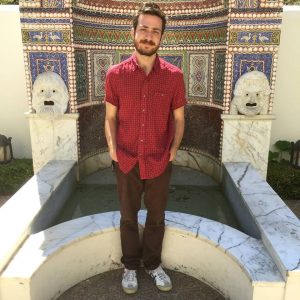 You teaching Latin is something I find pretty incredible. Is there a turn of phrase (and it’s English translation) you’d be willing to pass along to our audience to impress our friends and relatives with?

RN: Thanks! I’m glad someone in the world thinks that Latin is incredible. I have been studying it for almost nine years now, and there’s a reason I find it worth teaching. I’ve learned so many life lessons through Roman authors, and learning the mechanisms of the language itself. From Lucretius’s Epicurean realizations, to research on the seven deadly sins, to my original translation of an episode of SpongeBob, Latin has pervaded my life. There are so many wonderful phrases to choose from, but I’ll leave you with this pleasant line: elige cui dicas, “tu sola mihi places” (“Choose someone to whom you can say, ‘You alone please me’). This, of course, is from Ovid’s Ars Amatoria, informing the reader of ways to get laid when you’re out in public.

What’s in store for -ghost island-? Any upcoming shows?

RN: We are currently in the process of writing a sophomore album. Most of the songs are written, but we need to track them still, and we’ve been taking our time since we’ve still been making merch for our first album, we just barely received CDs and shirts to promote the first album. Still, we plan to get recording underway soon. This next album is going to be a concept album based on emotions, so our song titles range from things like “Your Joy” to “Your Equanimity”. Admittedly, it might seem a little hokey, but we want to put a new light on it, being an ambient, instrumental band.

Otherwise, we have one show coming up that we’re excited about alongside So Hideous, Bosse-De-Nage, and Pocket Leaf. The show is at Yucca Tap Room in Tempe, and while it is for ages 21+, admission is free! The show is on May 5 and starts at 8 PM.

I just have to share that “glacial” is playing while Lenore is randomly watching a classical dance class from China. It’s like a Dark Side of the Moon – Wizard of Oz thing. I’m almost frightened.

By all means, you can/should put this in the interview.

For more information about -ghost island-, readers can visit their Bandcamp or Facebook page. 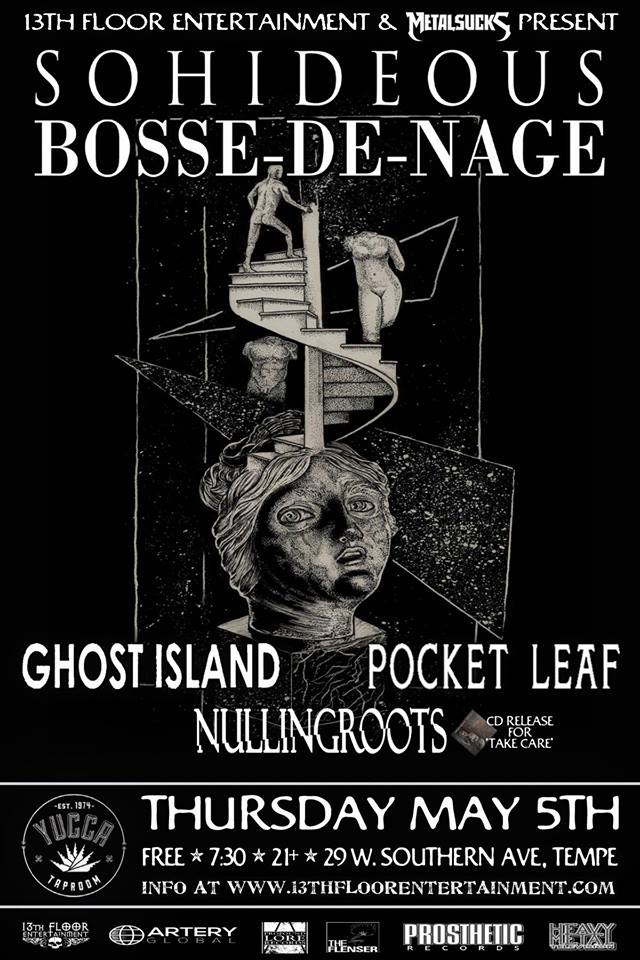