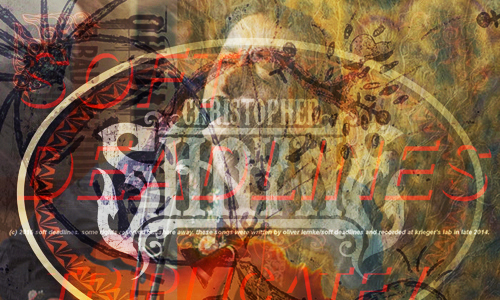 Tucson’s Ohioan is preparing for their release of a limited edition tape through Baby Tooth, a cassette label. “Bad Attitude” is the first single from the forthcoming EMPTY // EVERY MT. I was just about halfway through my first listen (which, btw, is four minutes into this almost eight minute song) when I knew this was a tape I needed to own. “Bad Attitude” moves from meditative moments of desert drone to a rustic ruckus of psychedelic Americana and back again. I love it. I have to have it. The cassette from Ohioan is currently available for pre-order through Baby Tooth here. Place your order early before they sell out and you can join me in the wait for the official May 13th release.

The strange and wondrous musical combo of Ariel Monet and Kalen Lander, also known as Snailmate, has a feisty new track available for fans on a 7″ split with Austin act, The Buglies. “Radio DJ” is funky, convivial, and a little bit dirty. Snailmate combines drumming with synths and a spunky lyricism for an electro-hiphop sensation. If you like things weird and ruckus, look no further. Check out “Radio DJ” and place your order for the split, due out next month.

The latest release from the Phoenix power trio known as Please has an easygoing garage rock sound that I can easily see becoming a staple in the local bar circuit. “Hey Hey What Can I Do” brings to mind beat-up blue jeans and summer radio jams. The track will have you bobbing your head on the first listen and singing along by round two. The song deals with the topic of the infidelity so maybe that means it’s time for the band to focus on the music-making for a while. That’s a win-win. Fans get more tunes from Please and the band gets away from whatever problem lady (or lad) that inspired “Hey Hey What Can I Do”.  Give it a listen.

Soft Deadlines released their LP, Critic, in November of 2014, but a couple of tracks got left on the cutting room floor that didn’t quite fit with the rest of the album. Now fans of Soft Deadlines can hear those songs because the band put them out as a single last month. The band describes their sound as “Dance-Punk” and I can definitely follow that thread through these two songs, but I find them more alternative than punk. There is definitely an aggression that drives the music and that’s punk so I’ll get behind the term. Check out “Triplicate” and “Means Everything”. If you dig what you’re hearing, I suggest delving into the band’s full-length, Critic, available through 56th Street Records here.

Christopher Shayne, former front-man of the now defunct Whiskey Six, released his first single as a solo act “Give A Damn” in February. Leaving some of the metal behind with his former project, Christopher Shayne delivers southern-inspired, dirty blues rocknroll with some country twang, perfect for the modern rock radio of KUPD. Although starting with a little banjo and the vocals, “I’m trying to remember if I give a damn”, the song quickly kicks in with heavy guitars and lickin’ riffs becoming the anthem for all who scream “I am just who I am.” Having already played some solid shows – including their debut at the Marquee and their recent Midway Stage performance at PIR for NASCAR, as well as opening in direct support for JACKYL at AZ Bike Week and playing the Jack Daniels Stage at Country Thunder – you should expect big things from Christopher Shayne, who truly does seem to give a damn.