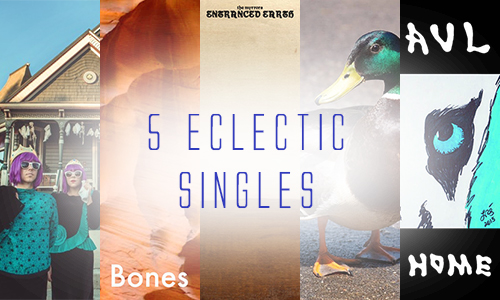 Tucson’s Wooden Tooth Records is offering up Katterwaul’s sweet single “Follow You Home” on limited edition 7″ vinyl with a second track, “Gimme Your Number” on the b-side. Now, Katterwaul just so happens to be one of my favorite bands and their 2015 album, 15 Forever, was my favorite album last year so my excitement knows no bounds. “Follow You Home” has all the feisty, blues-infused, garage rock that I’ve come to know and love. Katterwaul doesn’t hold back. They unleash sound like furies, but they also know when to ease up and mellow out. You can hear that all over “Follow You Home”. The b-side song, “Gimme You Number” turns down the aggression without losing the grit that defines Katterwaul’s desert rock. Get your orders in today for the 7″ because they won’t last long. This is going to be a collector’s piece for fans, no doubt.

“Throw It On The Fire”

“Throw It On The Fire”, the latest single from the highly anticipated (around here anyway) new album from Bogan Via is everything you want from a Bogan Via song and even a little bit more. It’s robust with synth, switches leads from Bret to Maddie, and even has a complete change-up in the beat before settling back down again. When their latest album, Boganvialand, was put on hold due to all their equipment being stolen on tour (including their laptops – with all their song files) we weren’t sure what was going to happen. Fans quickly rushed to support the band via crowdfunding, and we’re now receiving news that the band is embarking on their first national tour and that Boganvialand is soon forthcoming! You can purchase a pre-sale version of the new album here (limited to 1000 copies) and listen to their new single below.

Tucson’s Sun Bones offered up two unexpected tracks for fans in March. Rather than the effervescent indie rock we heard on their 2015 self-titled replace, “The Years” and “Chalet” offer a somber side of Sun Bones hinted at on earlier releases, but not embraced fully until now. “The Years” could be drifting towards me through the smokey air of an Upper East Side piano bar in New York City (if they still allowed smoking in piano bars). The line, “I see the years in my fingers,” becomes more heartwrenching with each repetition. “Chalet”, the second track, has an almost supernal quality as it meanders with its delicate and resonanting harmonies and lulls with a pulse-like rhythm. The effect is hypnotising.

The ambient desert rock of The Myrrors has been around since 2007, but it was only in recent years that I came across the Tucson band. I’ve been lamenting the years of fandom I missed out on right now. They just released two tracks from their forthcoming release, Entranced Earth, including the title track. “Entranced Earth” is an instrumental meandering that resembles a pyschedelic spirit quest more than a traditional song. In prelude to the album’s official release on May 27th, The Myrrors also included the song “No Clear Light” in their early offerings. I suggest assuming a meditative posture and sinking into the sound of The Myrrors. Don’t forget to place your pre-order – “Charred Copper” vinyl is available, but only a limited number will be made available.

The gentle, (dare I say?) dreamy track from Phoenix’s Wo Mann reminds me of springtime breezes and early loves; the kind where you just hold hands, or maybe, just maybe, exchange a few chaste kisses. The song, “dreamy boi”, is available in two forms: with drums and without. The latter version has better sound quality without losing that authentic bedroom pop feel. If you find yourself enamored with “dreamy boi”, just as I did, I suggest delving into Wo Mann’s back catalogue of offerings (available through Bandcamp).