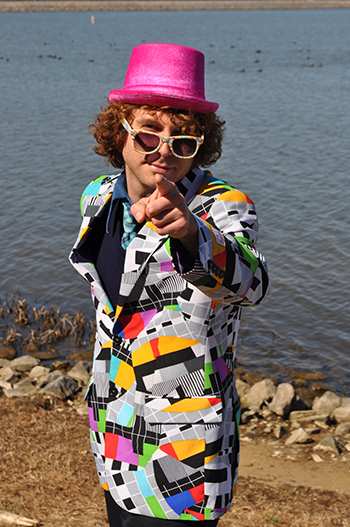 Jason Kron. All photos by Mari Morton unless otherwise noted.

An Insider’s Introduction is a new series that focuses on the creative individuals that help make Arizona’s music scene so diverse and resplendent.

Jason Kron is a man unique unto himself.

I was first introduced to him through his hiphop moniker “Hug of War” and soon became entranced in his approach to both music and fashion. Although definitely kitsch, there’s an honesty found within his lyrics and the costuming that is undeniably personal.

When I found out he was in a new band, Sugar Skull Explosion, with his 9-year-old daughter and that they had released their Father Daughter Dance EP last December, I had to contact him and find out more his new band, life in general, and the Martian that influenced him so greatly. Wouldn’t you know? I caught with Kron just as Sugar Skull explosion performs in their first official show this weekend (March 5th at the Trunkspace).

YabYum: How long have you been active in the Phoenix music scene?

Jason Kron: I’ve played in bands on and off since high school, but I didn’t get more involved in the local community (more specifically, The Trunk Space) until about 8 years ago, when I was 23. Getting really into Daniel Johnston is what gave me the courage to sing my own songs. I eventually settled on Hug of War as an alias, and performed quirky acoustic songs on and off for a while. For kicks I decided to write a couple rap songs for a kids music split I did with Run-On Sunshine in 2012, then I realized how much more I enjoyed making that style of music. So I figured if The Beastie Boys could switch genres and attitudes and keep the same name, why couldn’t I? Recently my daughter and I started a punk band called Sugar Skull Explosion. We go by the aliases J-Skull and E-Skull, and we’re going to conquer the world.

YY: How did Sugar Skull Explosion come about? Was it your daughter’s idea? Have you played the bass before this band?

JK: I’ve played guitar and bass since I was 13 and, in recent years, I’ve played bass in Dogbreth, Man Hands, and Hiccups. E-Skull made a largely Japanese no-wave album last summer under the name Cherry Blossom Puppet that’s on Bandcamp, and around the same time picked up the drums after seeing Dog Party at The Trunk Space, who also have a singing drummer. She wanted to start a band, came up with the name, and the rest is history! 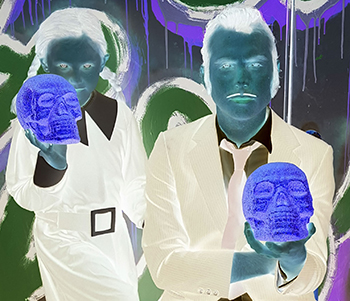 YY: What’s it like playing with your progeny in a group? It must be a blast and is maybe also a little terrifying? Ultimately if she’s interested in creating/recording/releasing music I’d expect you’d want to foster that in any way you can?

JK: Music saved my life, and being able to pass that along is an incredible experience. It’s also really inspiring to work with a kid, there’s so much artistic energy there. She’s way less creatively inhibited than any adult I know, and after years as a neurotic solo artist, I need that. Some people are surprised that a kid would want to listen to and play that style of music, but why? Loud, fast, energetic music…how could a kid not like that? When I played our band for my dad, he didn’t get how a band with a kid in it could have some scary lyrics, but I think it’s the same thing as me being into Goosebumps when I was younger.

YY: Who comes up with the themes and lyrics of your songs? Is it all collaboration?

JK: We work on everything together. Over the last several years, I’ve been reintroduced to the bullshit ideas forced into kids’ minds by the media. It’s especially brutal for girls, but as a kid, I definitely suffered due to the propaganda of how a boy was supposed to act. She’s smart enough to see how despicable all of that is too. Children are pretty damn wise if you give them a chance to be. So for both of us, challenging those ideas in kids’ media is an important theme of the band, and the ideas come from there.

YY: Will you still be writing/performing as Hug of War, or is that taking a backseat for right now?

JK: I’m working on new Hug of War songs that I really like. I write every day, and I love trying to formulate my ideas into multisyllabic word puzzles. But it’s a slower process these days. I’m parenting and working on our band and finishing my English degree, so I work on it when I can. 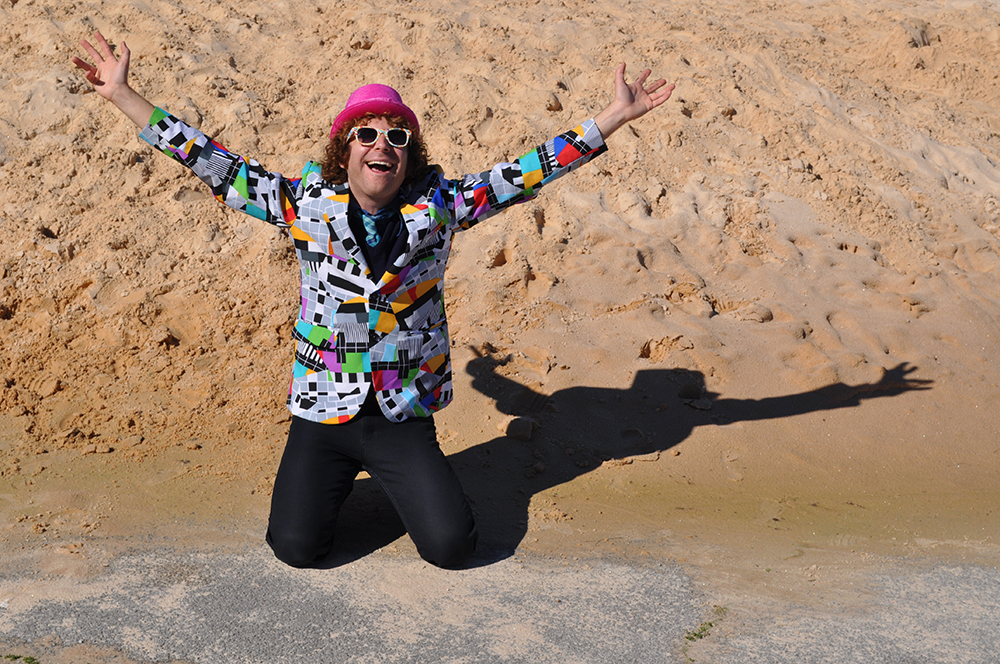 YY: I know you guys are about to have your debut show, but are there any other plans in the works for SSE? More EPs? A full-length?

JK: We’re working on our full-length right now, which will most likely be done by summer, being released by Casa Butthole Records!

YY: Could you describe Space Alien Donald for those that may not have knew him?

JK: Space Alien Donald was a true individual. He was a self-taught scientist who read a book a day and performed tachyon experiments for decades. He was vegetarian for 30 years and hated all war, schooling, government and organized religion, but he believed that the universe as a whole was a being with something to say. After many years of alienation, he started referring to himself as an extraterrestrial and stopped caring what people thought altogether. He made rap music and put out an album on Related Records in 2014, seven months before he returned to Mars, and I truly believe it’s one of the best outsider albums of all time. I wanted to try rap for years, and it wasn’t until I saw him that I had the guts to. He was my mentor, and I hope to some day come close to living my life as righteously as he lived his.

YY: How often do you get your sweet perm done? Is there a hairdresser to shout-out?

JK: I’d like to give props to Ambur Gore and the wonderful people at Honeycomb Hair Salon for turning me into the stud that I am today!

Make sure to check out Father Daughter Dance below and catch Sugar Skull Explosion’s first show at the Trunk Space with Diners, MAN-CAT. and Harrison Hufman this Saturday, March 5th. Show starts 7, is $5 and all-ages. More info on the event page here. 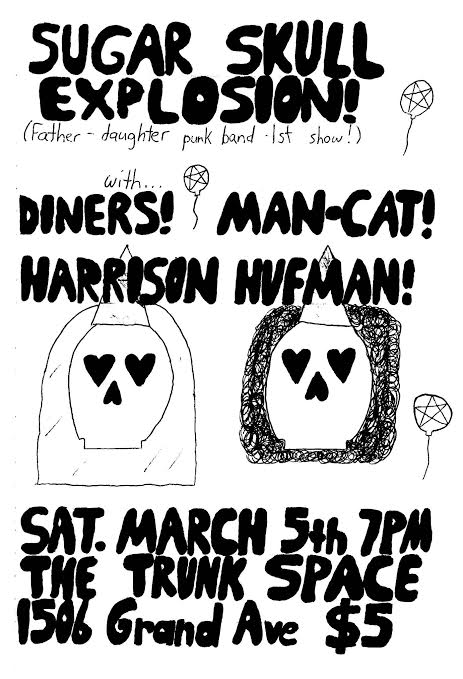 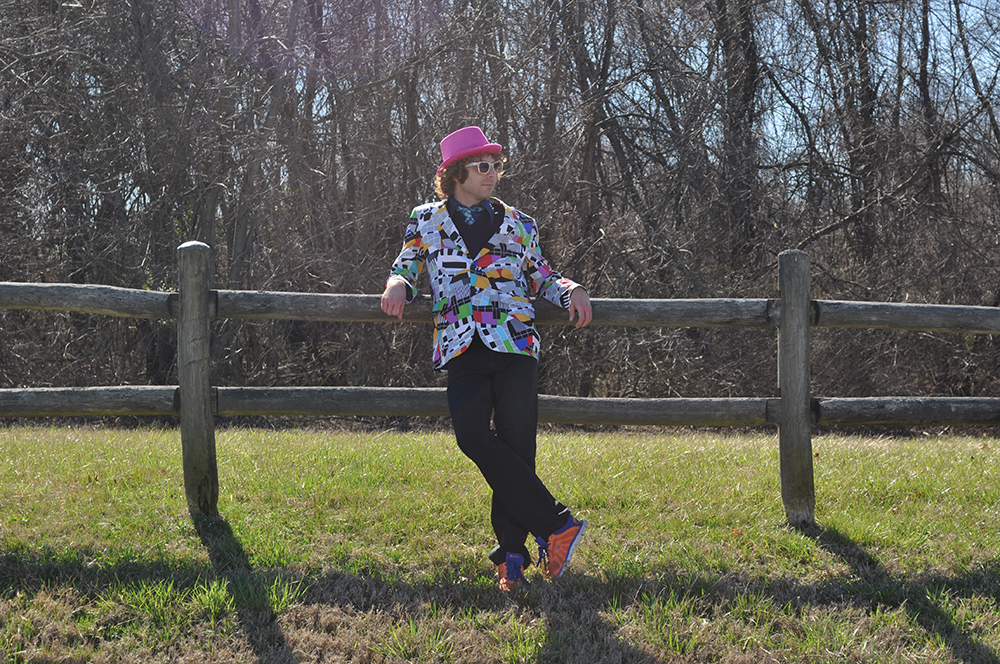