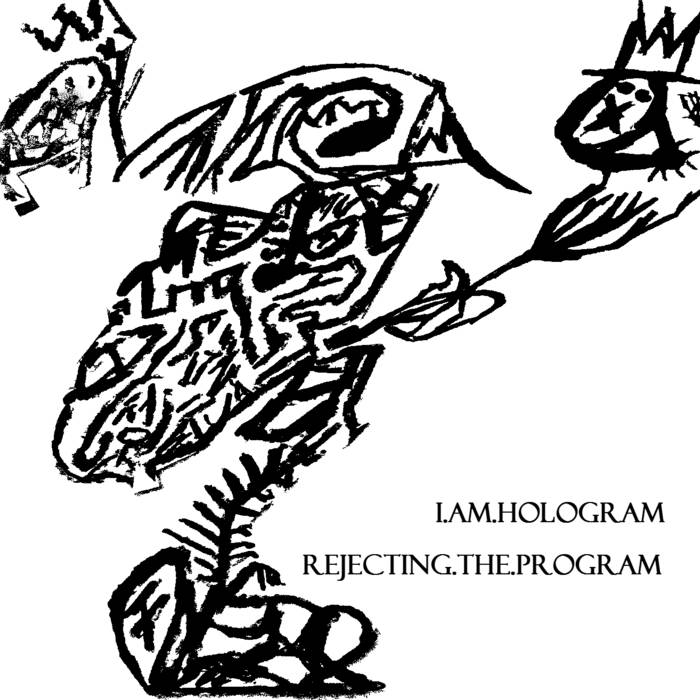 Sometime ago, after one of my previous reviews, I received a message with a Batman meme that read “You are the hero that we need”. I guess I said what they (and many others) wanted to say, but couldn’t out of fear of consequence.

I responded in turn with gratitude, but informed the reader that I’m more partial to The Joker. It’s true. He’s my favorite villain of all time. I’ll choose chaos over order any day. This made me think back to the pivotal interrogation scene from The Dark Knight– brute physical strength versus impenetrable mental toughness. It’s a cinematic testament to the delicate forces in the universe…the Yin and the Yang.

However, for his debut album Rejecting The Program, hybrid musician I.Am.Hologram takes on the role of both hero and villain a la Two Face. Nudging the tectonic plates of these forces, this one man band creates seismic imbalances while battling inner demons on a shroom-induced sonic vision quest.

In an attempt to capture the same raw energy as one of his live performances, Rejecting is essentially a live album recorded in a controlled environment…sort of. The “yin” of Rejecting is the fact that it was tracked in the dead of August heat in a cinder block rehearsal facility with zero air conditioning. Add in a bountiful of room mics with that heat, and you got yourself reflecting waves du jour, my friends. It’s chaos in all directions. The “yang” to this process is that it gives the album at times a very “People Are People” boom-y feel to it, picking up room noise as well as the PA monitors. Ambient noises like the clicking of foot pedals and loose power connections adds another level of humanity to the record, eliminating any preconceived notions of a perfectly polished production. Genius? Maybe. Madness? Possibly. Unorthodox? Absolutely.

My only strike against this album is the order of the tracks impeding on maximum impact and flow. Instead of the cliché “kick’em in the balls” opener to grab attention, listeners are bogged down to the shuffling morphine drip on “The Kid Just Died.” But it’s here that Hologram lets you know his intentions and vision. Using oddly tuned acoustic guitars noodling over droning bass lines and slurred vocals, the drum machine maintains perfect order in a world of imperfection.

From here, it seems to makes sense to have “House Of Dreams” follow with its “finally coming out of my shell” feel (“I’ve been hiding forever / With no guide to follow”) and cross-country gabber-esque tempo. “Phantom Tree,” an obvious choice for a lead-off single, is sure to resonate with many who’ve had trouble letting go of the one that could always get under your skin. Hologram’s songwriting prowess takes center stage with the chorus: “It’s gonna take a freight train to make me cry / And a satellite to get me high / Just to act like I ache for you no more”. Makes me wonder where this woman placed on his ‘Desert Island All-Time Top 5 Most Memorable Break-Ups’ list?

The next two songs on Rejecting give me goose bumps just writing about them. “Meta”, an instrumental track, puts the acoustic guitar front and center while his signature tweaking of delay pedal parameters emulates a machine powering down, or in this case, altering the program. This track is reminiscent of a suicidal Martin Briggs having a cocked 9mm in his mouth while mourning the death of his wife. Real moody, cheery shit…I know. In spite of that, it sets the tone for what could arguably be Hologram’s crowning achievement.

From the opening strum to the echoing ending, “All The Lonely People” is a raw masterpiece in writing, (“I guess I’ll be hiding in my sleep / I guess I’m not good enough to keep”) powered with angst, and driven by heartbreak. The chord progressions are beautifully woven while his staple whole-note bass lines add a rising tension approaching the chorus. I mean, fuck me…THIS is a great track. It would’ve been great to have this song slowly fade out while “Awaken The Androids,” another instrumental, slowly faded in as a sort of reprise to “Meta,” closing the chapter on a great section of the album.

A slinky blues stomp takes form on the ambiguous “The Dancer And The Arsonist,” an honest track that makes me question whether or not strippers have a heart or just enjoy playing with ours. I can’t decide if the protagonist is actually living with the dancer or is just a repeat customer. “You say the damnedest things / at the damnedest times / in the damnedest situations / And that’s why I love all of you” could throw the listener for a loop. Is her routine so arousing to the point that it could go further for the right price? Is he in a loveless relationship, seeking an escape from the monotony of his own life? Or possibly a lovers’ quarrel before she disappears into the night to shake the goods in front of other men? I dunno…and dammit I love it. Keeps me guessing with every listen and should be on repeat at your favorite cabaret.

Crossing over to darker territories, “Frequency 540” finds our hero speaking in indecipherable tongues and meditative tones over a single sine wave. The frenetic and subtle guitar patterns are almost played in a certain cypher, unlocking the Ninth Gate. If that’s the case, “When The Devil Is Near” is the crossing of the threshold, even altering the timbre of his vocals like a man possessed (“When the devil is near, and the devil is here”). Strange things have reportedly taken place when performing this song in the past…as if it’s not supposed to be played. Bad Ju-Ju all around, my friends.

Finally, a cathartic call-out concludes this musical masterstroke on “Osiris (Remind Us)”, emphatically declaring “Everything you say I will hold against you / Everything you do I will fight against you / I’ll survive you too.” But it just wouldn’t be yin-yang without the line, “I feel so fake yet so unreal when I’m with you” for one last twist.

Rejecting The Program: perfect by design, flawed in nature, turbulent in presentation. I believe in Hologram. But is he the hero we need, or merely an agent of chaos? Flip a coin.

Listen to Rejecting The Program below. For more information on I.Am.Hologram visit his website.