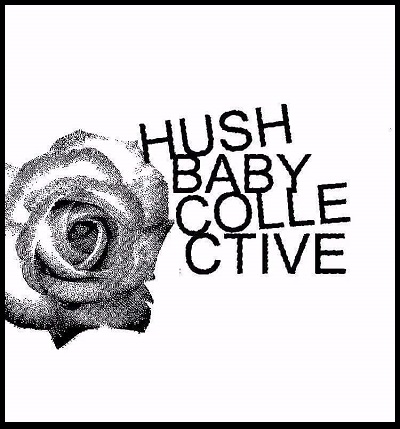 Hush Baby, an activist collective and zine, celebrated their one year anniversary this past weekend and marked the occasion with the release of their fifth zine and a rocknroll show featuring some of the Valley’s happening young talents including Diners, Lai, Nanami Ozone, Pro Teens, and Hiccups. I had a chance to ask Ryan Mellor, founder of Hush Baby, a few questions about the collective and their plans for Year Two.

LL: Tell me a little bit about how Hush Baby started…

Ryan Mellor: Hush Baby started almost 1 year ago [at the time of the interview]. It started as a response to the lack of representation of female and femme-identifying artists, poets, and musicians in our community. The collective originally started as a ‘DIY zine publishing’ type of deal, and while we will still continue to make zines in the future, our focus has shifted more toward gatherings. Whether that be music shows, poetry nights, art workshops, or benefit shows, we strive to get people together and to give an inclusive space for local creators to showcase their talents and hopefully raise awareness about certain issues in our community/society we feel are important.

Can you tell me why you selected the name “Hush Baby”?

The name “Hush Baby” came from the way women (or those who identify as women) are talked down to by telling them to “hush” or “shhhh” and being given pet names like “baby”. The collective itself started with the mantra, “this is not for you,” which basically means, this is a safe space for art and expression for the ARTIST and not for mainstream opinion.

What themes have you touched upon in the past?

Themes we have covered in the past (through zines or benefit events) include: local female artists recognition, what does feminism mean to you, body positivity/self care, mental health awareness, and the importance of Planned Parenthood. This upcoming zine focuses on trans, queer, and non-binary visibility/perspectives.

In 2016 we plan to release a zine called “Whorephobia” which started toward the end of 2015. This zine focuses on the stories of actual sex workers and their personal experiences working in the world of selling sex. Very sex positive, anti-slut-shaming, and bold.

Who are some of the artists that have participated in Hush Baby?

We tend to do shows with mainly local groups, usually with similar feminist ideals and/or female or femme representing musicians.

What else can we expect to see from the Hush Baby Collective in the coming year?

In 2016, we also plan to host an amazing benefit show called Femme Fest on June 4th at 51 West. The lineup is made up of entirely all female or femme musicians, as well as an art show, photo displays, zine tables, and poetry readings (again from all female and femme creators).

This benefit show is to raise money for Girls Rock PHX which is an amazing nonprofit organization that empowers girls through music education, creation, and performance.

For more about the Hush Baby Collective, check out their Tumblr page here or follow them on Facebook!

For information on Femme Fest 2016 which happens this coming June, head here!!