It’s often noticeable that many bands evolve in a musical direction, oftentimes losing that initial intensity as they mature and develop a wider range of fans. While The Haymarket Squares have certainly gotten more popular over the years, they definitely don’t let fame go to their heads, continuing to release their own music, manage themselves, and even produce their own videos. While their sound has obviously progressed over time, they have constantly maintained their raw energy and frustrated, albeit funny, lyrics. Their fourth and latest installment, Light It Up, is yet further evidence of all the talent, hilarity and chaos that The Haymarket Squares have to offer.

The album starts off with the tongue-in-cheek, anti-gospel, Americana song “Heaven,” kicking off with their trademark barbershop style vocals feeding into one rockin’ tune filling the air with Jayson James’ fiddle, Mark Sunman’s piano and shredding guitars. Then, they bust straight into their anger-filled punkgrass with “Horrible Inventions,” chock full of screams and harmonies. The urgency continues with “Working Reward”; a beautiful, nihilistic country punk tune spliced with waltzes and killer mandolin from Sunman and Mark Allred’s slide guitar solos.

If you can’t imagine this album getting any better, “Let’s Start a Riot” is a slow-building yet fiercely dark bluesy anthem that makes you wanna do far worse than call in sick to work tomorrow. The Haymarket Squares simmer down just a little in the dire swing song “High Demand,” led by the incredible clarinetist Chris Hoskins of Captain Squeegee fame. If their skill hadn’t already shone through on this album, breathtaking latin-styled folk tune “Jump The Border,” makes you want to hit the road for good but not before listening to the sick guitar laid down by John Luther.

Light It Up moves forward with an Americana folk song, “King Me” with its outstanding mandolin and fiddle shining. The Haymarket Squares really mellow down though with the gospel country tune “No Such Agency,” dedicated to the NSA. However, they pick it right back up on a mandolin-charged punkgrass song “Gritty City”, going no-holds-barred when it comes to their sarcastic, dark humor.

They pull back a little on the bluegrass gospel tune “Part of the Problem,” with a mesmerizing piano and upright bass breakdown, courtesy of Marc Oxborrow. Light It Up busts right back out with their ferocious punkgrass take on “Fortunate Son,” chock full of stunning slide guitar and fiddle. The Haymarket Squares close the album out with the frantically joyous and harmony filled punkgrass tune “Goodbye,” spinning a jovial take on humankind’s demise. Light It Up is a glorious listen, offering The Haymarket Square’s original punkgrass sound while impressing listeners with its mind-blowing ingenuity.

The Haymarket Squares new album Light It Up will be released on Feb. 26th. On Saturday Feb 27th, they will have their Light It Up release show at Last Exit Live. Show is at 9PM, is 21+ and features Front Country from San Francisco and local favorites the Pubes. There will also be a video premiere, vegan food truck, and a free lyric booklet. For more info and tickets, head here. Check out the first single “Let’s Start A Riot” below. Video directed by Matty Steinkamp of Sundawg Media. 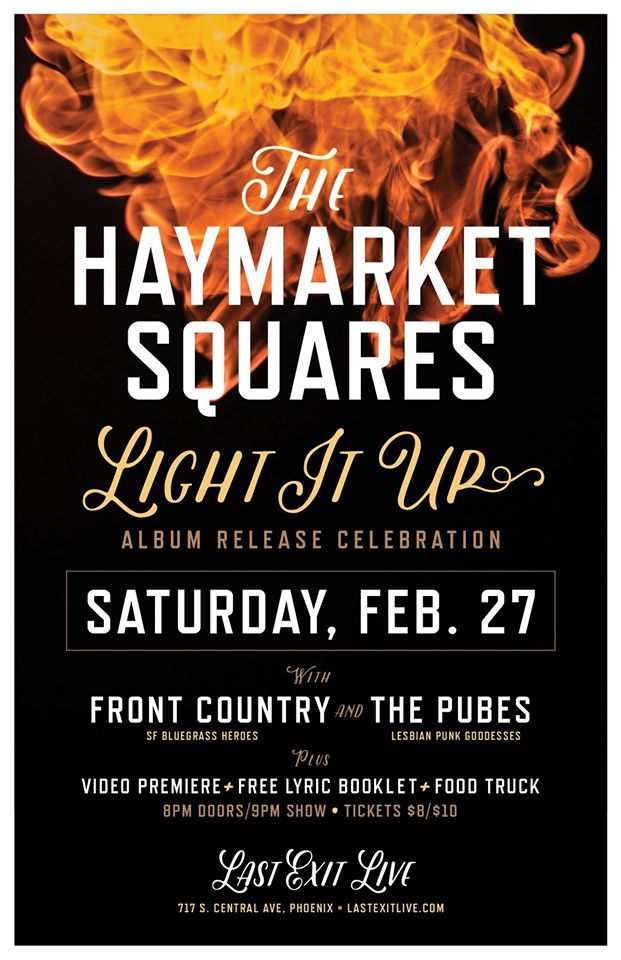