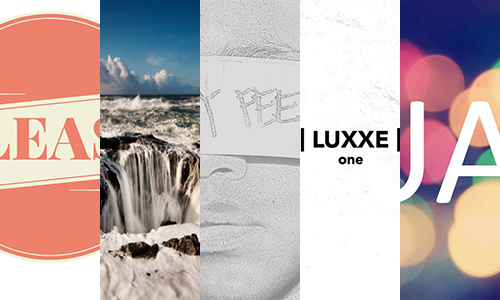 It’s been a little over a year since Phoenix’s Please dropped their debut EP, but the appearance of a new single hopefully bodes well for a new album on the horizon. “Things I’ve Been Thinking” is a musing number on the nature of love set to a psych-tinged alt-indie sound. I’m definitely about this new single (all 7+ minutes) of it. I liked it so much I immediately went back to their previous release to see if I’d been missing out on the Please bandwagon all this time. Yes. Yes, I have.

Luau is a Phoenix-based, emo-gaze band that started playing shows in the Valley in 2014. “Leucadia” is a new single from the band who only recently started releasing demo tracks online. The song moves gently from beginning to end with a mellow crescendo that will have you swaying rather than head-banging. That’s my kind of emo. Check out “Leucadia” from Luau and follow the band on Facebook here for 2016 show dates.

I’m super digging this new track from local writer, photographer, and music-maker Beatnik Fem. Soothing beats and delicate vocal layers surround the listener in a gentle wash of introspective sound. “In My Feelings” offers listeners a melodious HipHop hybrid. Give the track a listen then head over to her website here to check out some of her other artistic endeavors. This is an artist to keep an eye (or ear) on. I will pay good money for an album from Beatnik Fem.

An entomologist, for those that are wondering, is the study of insects. The song really seems to have very little (to nothing at all) to do with insects, but it’s still my favorite track to emerge from the Scottsdale band yet. Luxxe creates mellifluous and upbeat indie rock that’s radio ready and “Entolmologist” is a shining example of this sound. Give it a spin.

SURF has been bringing the Valley minimalist surf music for sometime now under the direction of Aaron Tijerina. The band’s latest track, “For Jenn”, delivers more of the calming beach-vibes we’ve come to appreciate from the SURF camp. “For Jenn” is more definitely more sandy sunset than Frankie and Annette. My only complaint is that the track seems a little placid, more background music than a single to be played over and over, but I might not be fully embracing the “minimalist” aspect of SURF. Give it a listen and decide for yourself.