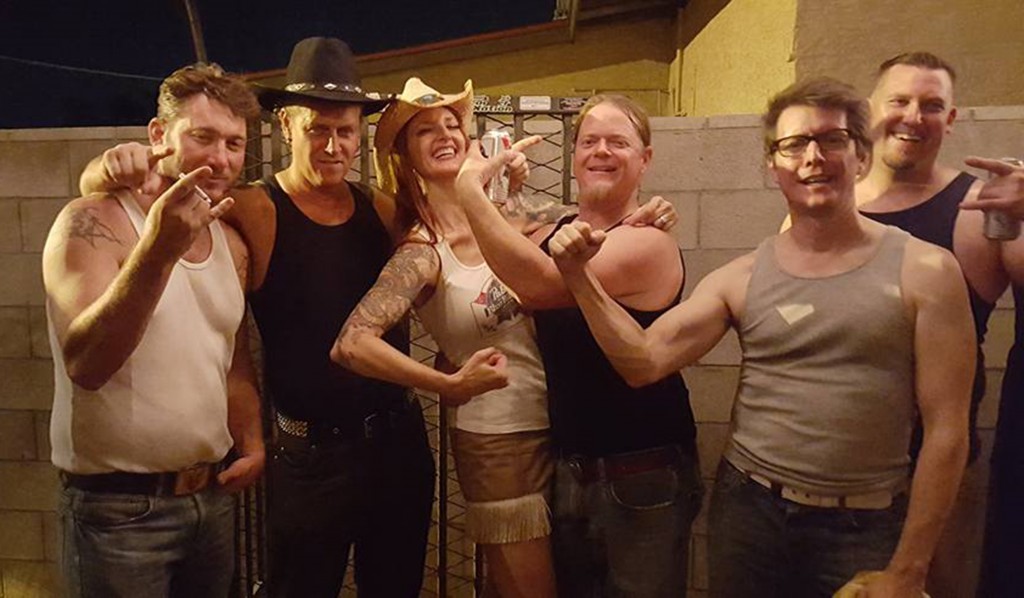 The Hay Girls chat with Gingher Leyendecker of The Hardways. Read the interview here…

Song River: What brought The Hardways together back in 2003?

Gingher Leyendecker: I used to play classical guitar and 12 string and took lessons from Kurt Hauser at the Tonal Center. I would make up folky songs and Kurt would record them for me. One day he asked if I wanted to start a band with him. I said “I don’t have an electric guitar.” He said “Get one.” And that was that. It was terrifying at first, but we got better and it started to be super fun. We’ve had a lot of members through the years, and I have to say it’s amazing to be in the same band all this time!

I’ve had the pleasure of working with so many great musicians in The Hardways. In addition to Ian and Kurt, I really enjoyed having another female in the band when Patti played drums with us. Our current lineup with Dan, Chris, and Nate has to be the strongest version to date, in it’s versatility, tightness, and sheer amount of material.

SR: So, did you just pick up bassist Chris Lykins along an Arizona highway as he was thumbing for a ride or what?

GL: He had a sign that said “will bass for beer.” Actually Chris was the lead guitarist for the metal band Atrophy that toured the world in the 90’s. He quit to go to medical school and, while he was there (with all that time on his hands!), took up bass. He’s been a facial reconstructive surgeon for years, but missed playing live. When our bassist Ian Wender decided to go his own way the timing worked out perfectly for Chris to join us.

SR: What has Chris brought to the mix?

GL: Chris is so technically excellent that it made the rest of us work harder! He’s also good at picking out timing issues and helping me work through them when writing new songs.

SR: Have you always been the quintessential “Saloon” band? 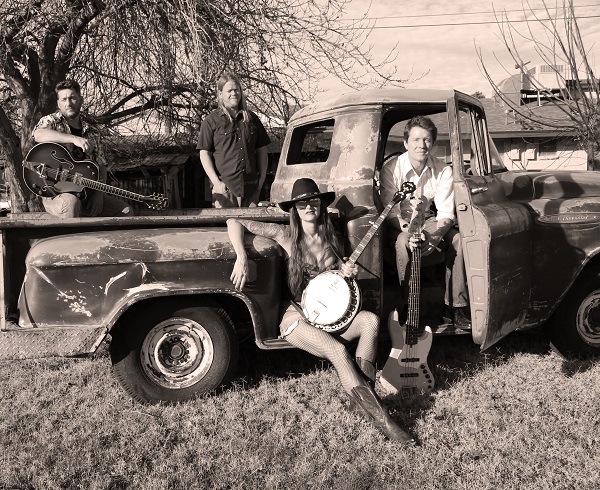 GL: Pretty much. It’s hard to pin down a label on our sound because our influences are so wide, everything from punk to old school Americana. We’ve played shows that were country, rockabilly, rock, and punk, and are usually able to mold our set accordingly. We have about 50 original songs and a range of covers that we make our own. We are as comfortable playing in a biker bar as at a rodeo!

SR: You have substantial following in your home-state, Arizona. What do fans of The Hardways call themselves? Hardwaydeons?

SR: Your sound is rooted in the desert floor and mountains, but even more so across a smoky bar room, with the glow of orange-paneled walls along with a let-it-all-loose dance floor. When those moments happen, when everyone is letting go- what emotion pulses through you?

GL: We just had a super rowdy four-hour show for Halloween in Jerome where the place was packed beyond capacity and everyone was dancing and having a blast. During those moments, it feels effortless; the music flows and it is pure fun.

SR: Gingher, how many instruments do you play? And what/when did you begin with?

SR: Do you think the doors have opened themselves wider for female musicians in the last ten years? If yes, how? If no, why not?

GL: I think there are always those with something against female musicians. After one of our shows I had a guy come up to me and say “when you guys got up I thought to myself ‘oh man, another stupid chick band,’ but you guys rocked!” I think you have to just keep moving and open your own doors. I really appreciate how the female musicians in Arizona support each other.

SR: Would you classify The Hardways as a ‘female-fronted’ band? Or just a group of musicians that love playing for others?

GL: We’re just a band of musicians who get along great and have a blast playing together. That’s the key for any band—to get a number of adults with jobs and families and hobbies together on a regular basis to create and put on shows and record takes dedication to our craft and to each other. That’s way more important than being a “female-fronted band” to me.

SR: Outside of the band what are some of the things you enjoy doing? What about the rest of the band? Other pursuits, interests or hobbies?

GL: I’m a para-glider pilot so any weekend we’re not playing I’m in the air somewhere. And I teach life drawing and art anatomy at Mesa Community College. Art, music, flying and, of course, Jimbo are my things.

Nate says he enjoys bullfights on acid, swimming in shark-infested chummed waters, and sitting in his front yard yelling at kids to get off his lawn.

Chris’s hobbies include skiing, diving, and the ancient art of cock-tailing (fancy pants for drinking).

SR: Three albums listed on your discography, any plans in the works for another one?

GL: We’re in the middle of recording now. We have 8 out of 12 songs finished and hope to be done in December.

SR: Out of the four, do you personally have a favorite?

GL: The latest album with Chris is already my favorite. We are recording with Jamie Weddle at Studio Cat and it’s an amazing place.

SR: Each album was recorded at a different studio. Talk to me about this last recorded album.

GL: Our first album, Dealer’s Choice, was recorded at Living Head Studios on a “24 Hour Lockdown” special—it was a crazy 24 hours! Next we recorded I-10 Blues after Nate had been in the band for a month, with Brad Golemon at Under Mountain Studios. We did Crazy Miles with Olivier Zahm at Electric Lotus, and you can see a “behind the music” video of the project done by Christopher Hambright of Orchestrate Media if you look up “Crazy Miles” on YouTube (Chris also filmed “I-10 Blues” and “White Trash Christmas,” also on YouTube). Album #4, which we’re kicking around titles for—let’s just call it Essential Hardways for now, should be done in about a month. We are enjoying working with Jamie at Studio Cat so much! He has an amazing attention for detail, great ideas, and puts in many extra hours of his own time working out how to showcase each song. We are already planning on working on album #5 with him, hopefully by the end of next summer!

SR: “White Trash Christmas” has really become one of your anthem songs. What inspired this fired up and roaring poke at the holiday?

GL: It’s autobiographical, all the scenarios in the video happened. Then again, my daddy always told me never to let the truth get in the way of a good story.

SR: Finally, Gingher, you’ve been given the key to the finale of Saloon Heaven. The stage manager has requested you put together this evenings music line-up. Who would you like to see play on stage (local, national, alive or passed), and who would you like to perform with?

GL: The evening show would be The Hardways, Hank III, Reverend Horton Heat. But it would be an all day music fest, with all our favorite local bands, especially those with female musicians! The very last song we’d have everyone on stage for one rambunctious rendering of “Zombieland AZ” with lots of screaming and ye-hawing and maybe some kazoos!

Listen to the original broadcast on DLUXRadio.com here