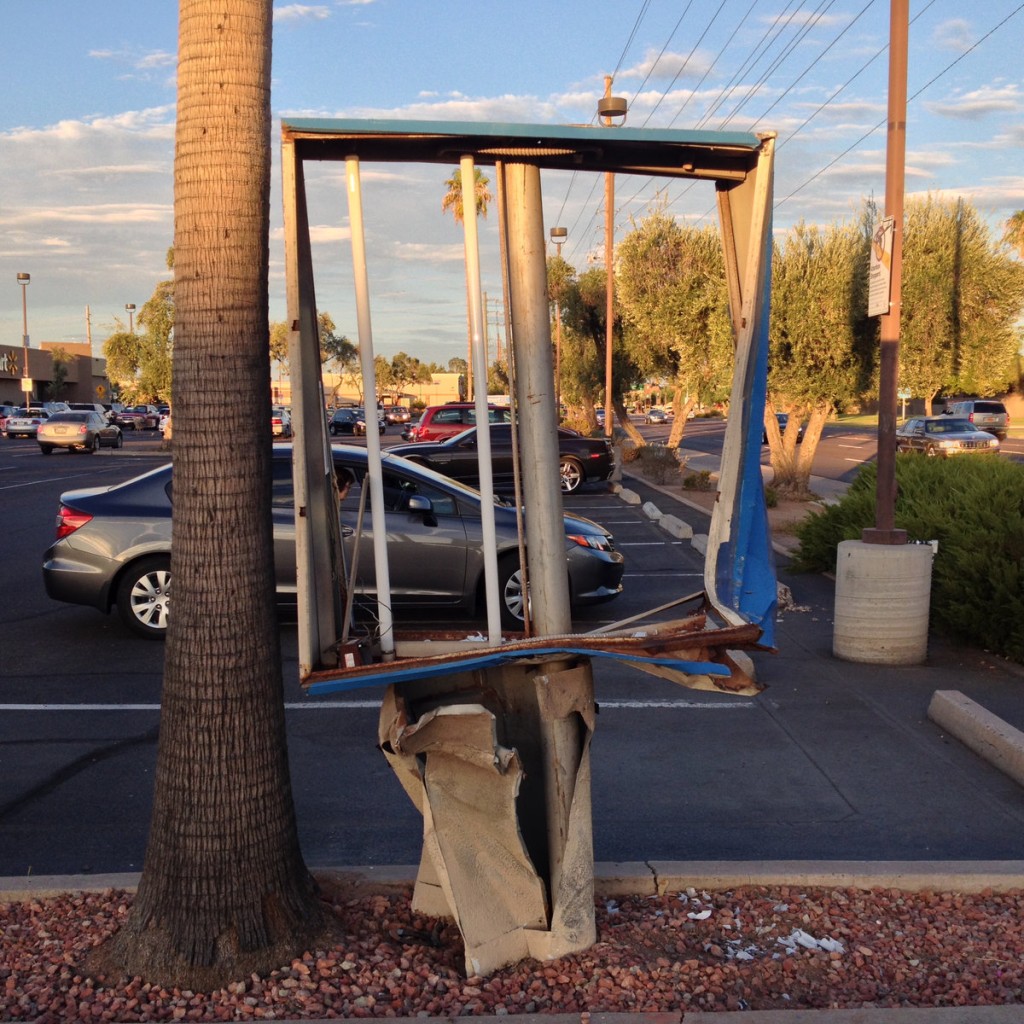 Soft Shoulder has been making gritty, experimental music around the Valley for ten years now, chasing all those people who only think they’re into avant-garde music out of bars and into the reality that they’re nowhere near the edges of the industry.

At the heart of the project is James Fella, a soft-spoken sort of guy who exudes a disarming warmth. His music, on the other hand, is very confrontational; dissonant even and intentionally distant. Soft Shoulder might be his most user-friendly musical formation and, once you hear it, you’ll understand that Soft Shoulder isn’t trying to create radio hits. They’re exploring the outer reaches of sound and art.

Soft Shoulder is ready to release their new LP No Draw through Gilgongo Records on December 1st [but you can preview the album here]. Side A includes four tracks recorded in 2009 at the now-defunct Ye Olde Bike Saviors while Side B presents “Repeat #3”, an almost twenty-minute song recorded in 2014.

I had a chance to chat with James Fella about the new album and the shape of Soft Shoulder, past and present.

YY: Where did you record the album?

James Fella: The A-side was recorded at YOBS with Gerald Biggs, who at the time I was recording with constantly (mostly solo material, but also Soft Shoulder). I enjoy recording on my own as much as possible, but Gerald is undeniably better at it. When we would do it, Soft Shoulder was usually just me, but in the case of this LP, Paul (Arambula) played drums and Stephen (Steinbrink) played bass – they were “the band” at the time before Stephen moved to Olympia and Paul to Berlin.

Side-B was recorded at home, and was an unplanned sort of thing. Ricky and Sean from Oakland band No Babies were in town, with another band, Human Behavior. (No Babies were on a 4 way split 7″ with Soft Shoulder and I released a 7″ with them on Gilgongo last year). They stayed the night and we ended up recording that track the next afternoon. It’s an extended version of an instrumental song that occasionally is used as filler in the live sets… not meant in a negative way, I love “filler” sort of tracks, ones that are allowed to go on and on. Playing with them was very natural feeling, the only portion we really discussed was the beginning and the rest just sort of unfolded on its own. When we finished, the track was something like 35 minutes long I think… so we had to edit it down to fit on that side of the LP.

YY: I noticed that the first four tracks were recorded in 2009 while the side B track was recorded this past year. How long has the band been together? How has the band changed since in the past five years between recordings? Part Two: It seems like during that time you moved further away from “accessible”. Is that an intentional move?

JF: 2005 / 2006, the first couple of 7″s came out in 2006 so that’s a fair “starting point” I guess. It’s hard to really chart any direction(s) the band has gone… earlier in 2015 there were 3 Soft Shoulder 7″s that basically swept up all of the unused tracks between 2009 and now, so in a way the LP was doing the same. Above all else, the band is inconsistent – which for some people (who may enjoy some of the material and not other) might be annoying, but for me, allows it to be an outlet for whatever it is I’m feeling like doing at the time. I would say that the most recent versions of the band, live anyway, have been fairly accessible, the only alienating aspects might be volume and repetition.

YY: A lot of bands attach the term “no-wave” but this is one of those times when I feel it’s being aptly used. What does no-wave mean to you?

JF: One of the first physical records I was able to appreciate was my father’s copy of No New York (a 1979 LP with several tracks each from James Chance and the Contorions, Teenage Jesus and the Jerks, Mars and DNA – curated by Brian Eno which I assume is what sparked my dad’s interest in the record). If that is to serve as a reference point, there is plenty of inconsistency there but maybe an underlying factor of “free” playing – “free” being open-ended in some cases, but “free” also being free from conventional playing, guitar parts that are devoid of any inkling of harmony or even “notes”, vocals that are spastic or shrieking, rhythm that may be completely disjointed or relentlessly repetitive. I don’t know if that really answers the questions as far as what it means to me, and truth be told I don’t feel that every Soft Shoulder track meets my own criteria for this label by any means, but it’s without a doubt a driving force in how I approach writing and performing with the group – even if it’s not always that apparent.

YY: How does Soft Shoulder differ from your solo work? Do the artists that you work with help write or construct the songs?

JF: Solo work is formless, generally no melody or anything like that, not “song oriented” where as Soft Shoulder is “songs” when it’s at least somewhat weird or out there. I like playing normal guitar too – playing in Detached Objects has been satisfying in that regard lately!

I generally write the songs while recording them, it’s an all-in-one process. The A-side of the LP is songs I wrote while recording alone at Sound Kontrol a year earlier. That being said, when playing with others the songs can change, Stephen added so much to the bass parts, so it was nice to re-record them as full versions that had input from others. Like everything else I guess it’s inconsistent, but I’m always open for new things to happen to songs or improvised pieces when doing it with a full band.

YY: Who performs with the band at present?

JF: The band right now is a rotating group, there’s no regular practicing or anything like that, basically whoever is able to make something work is who is in the group that time around… so in some ways right now Soft Shoulder is:

YY: What’s next for Soft Shoulder?

JF: Going to do a CD that compiles the LP, 3 7″s, and various other random things… hoping to record and put out more records pretty steadily for the foreseeable future – like a 7″ or two and hopefully LP each year… not sure… sometimes the band is very active and other times nothing for long periods of time.

I’m really enjoying the group of people who has been playing with me lately so hopefully we’ll play somewhat regularly.

Listen to No Draw by Soft Shoulder here and get your own copy on vinyl! You can also preview it below.