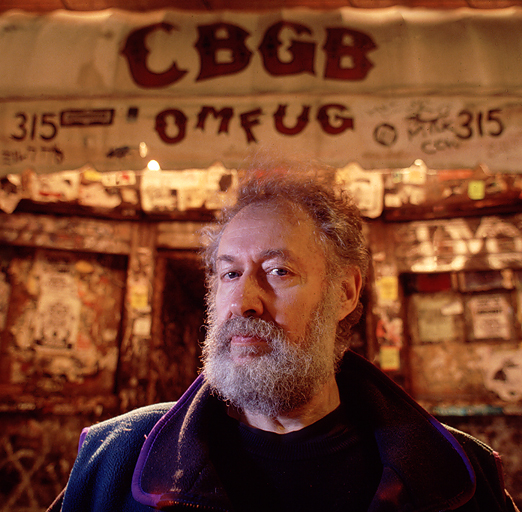 Hilly Kristal, owner of CBGB’s in front of his famous music club November 29, 1993.

How you can help the Phoenix music scene without even getting dressed.

I just completed my third viewing of CBGB starring Alan Rickman, (aka Hans Gruber, Professor Snape, and many more…), and it occurred to me, there’s a pretty big reason why I have to endure someone whining about, “How much the Phoenix music scene sucks”. For the record, I loathe that term, “the music scene” so that will be the last time I use it.

Any way, CBGB is a terrific film. Yeah, yeah, yeah, the actors portraying the punk rockers that played the place where dull and unimaginative, but that was not the point. The story was how Hilly Kristal, owner of CBGB, took his love for music and gave musicians a place to play. He, pretty much, is credited for bringing Punk Rock to the masses and helped break the careers of The Ramones, The Talking Heads, Blondie and many, many more acts.

Gone from the rock world for some time now, Kristal was quoted at the very end of the movie when asked why he kept the place open.

Interviewer: Why do you keep this place open?
Kristal: Because these kids, this music, need to be heard.

Of course, that was a different time. You actually had to leave your house to see and hear music. Nowadays, one never has to leave the house thanks to Internet, downloading sites, and streaming services. I mean, like, never.

Too, CBGB was smack dab in the middle of a crowded city. In Phoenix, specifically, the bars that feature live music are located away from the city, relatively. In New York there was/is amazing public transportation. Here, not so much (although, I hear the Light Rail now goes to Mesa. Um, ok…).

OK, so let’s just put the distance from populated areas and the transportation aside, there’s one way you – yes, you – can get the word out and support the music and the bands that work so hard creating it: Share it.

No seriously, it’s that easy and I don’t see enough people doing it.

Every day, the mighty YabYum (or another blog) posts an article. And it literally takes a nanosecond for me to share it to my wall. OK, you’re like, “Yeah, that’s gonna help…”

It will. It does. I promise.

That share goes out to everyone I know. And that gets the word out about the blog. And, in the world of social media, that stretches the reach of the said blog and grows readership. Tag someone who is mentioned in the post, and you double the reach. Tag three. Tag four. Tag five. And you broaden the reach like crazy. Instantly. And it took you all of 5 minutes to do so.

Now, imagine doing that for a local band (or, a local photographer or artist). Now, take that post and share it on a friend’s wall that you think will dig it. Boom! You just helped broaden the reach of Phoenix music and maybe, just maybe, that person will listen and/or share that post. Viola! Phoenix bands, et al, gets the attention it truly deserves. All thanks to you.

And, maybe I’m crazy, but say you like a band. I mean, you’re crushing on them super hard. Take that post and re-post it on a friend’s wall in another state (and beg to that person to like that page, if you’re so inclined). Well done! You’ve just helped spread the word about that band and proved to the world that Phoenix music doesn’t suck.

And, you can do it naked.

(Fuck, if you can’t see your way through all that hassle, give it a like and Facebook will let someone know you liked something…I mean, if that’s all you can muster, at least you did something, you lazy wretch.)

Because remember what Hilly said: (Because) these kids, this music, need to be heard.