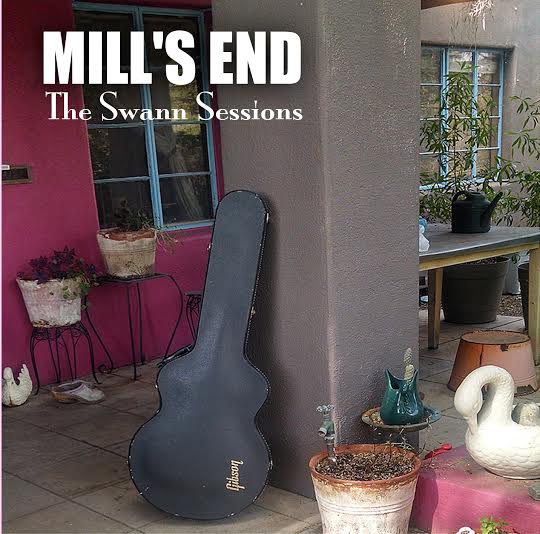 The Phoenix local scene holds some truly great jam bands. Mill’s End, when experienced live, brings a powerhouse element to the sounds of a fully engaged jam session. Check out their new EP, The Swann Sessions, and catch them at one of the many venues they will performing.

Song River: Why the title The Swann Sessions? (Even the EP cover includes the swans in the photo shot)

Mill’s End: Peter Swann was the producer and engineer of the album. The album cover is actually his front yard where his studio is and we just named the album for him.

SR: How long ago was your album release, Monkey?

ME: Monkey came out over 2 years ago.

ME: I think more than ever our songs are truly collaborative. The last album featured songs that I had brought in and this album really reflects how the four of us write together. Our approach continues to be to push ourselves to evolve as a band and musicians. We really want every new song to be a step forward in the progression of our sound. We really try to incorporate different elements into new material so it’s not a repeat of what we have done before.

The other big change is we have a new drummer. After the recording Mark Bainbridge decided to concentrate on his business and Mike Eckert has stepped in. I’ve known Mike for over 20 years and we have done projects in the past so it’s really great to have him in the band. At the same time we really appreciate all the contributions of Mark and the album really showcases what he brought to the band.

SR: I believe Monkey had 8 tracks on it, for this one though you decided on a four track release. Any particular reason why?

ME: Honestly it was a financial decision, the delay between albums was due to us saving up money so we just decided to do an EP because we didn’t want to delay new material any longer.

SR: What is the story behind track one, “Keith’s Junk?”

ME: “Keith’s Junk” was the working title of the song as we were putting it together. We talked about changing it since it really doesn’t have anything to do with the lyrics, but everyone thought it was a cool title and decided to keep it.

SR: “Old Man” seems to speak from an observational point of view.

ME: Yes, Keith brought that song in and was very focused on how it should sound. The song has a very strong message about the issue of homelessness and how it is something that needs to be addressed.

SR: The traditional sound that says, “Hey, that’s a Mill’s End tune,” really comes through on the song, “Stand.”

ME: That’s funny because Geoff also thought that about “Stand”, personally I’m very proud of that song it went though a lot of rewrites to get to the version we have now. I think when you hear it live you really see the band throw a good jam at the end, something that comes out in a lot of our songs. But I really think that song shows a blend of a lot of influences, which we tend to do.

SR: How important to you as a songwriter is it to try and develop a message within your songs?

ME: It’s very important, but it does come naturally. You write about things that you are passionate about and in many cases you are telling a story or giving a perspective. I think any time you create there is some kind of message that comes out of it even if that message is the positive result of expressing yourself.

SR: Your last track, “Run and Hide,” brings around that sound reminiscent of the Allman Brothers. Geoff Butzine’s bass really thumps through on this track.

ME: Allman Brothers and Southern Rock are very big influences on us, Keith plays that style very naturally and Geoff did a great job with the bass line, I was really happy with the drum/bass breakdown section.

SR: You recorded The Swann Sessions with Co-Ho-Nus Records, how was that experience?

ME: We worked with Serene Dominic, he is the man behind Ca-Ho-Nus and Onus records and he has been great. He really believes in the local scene and has been doing a great job letting people know about the album and working with us on things like album art and promotional materials. We really appreciate everything he does, it’s been great.

SR: As the lead vocalist Jeff, what part of the music process do you find the most pleasure in: writing, recording, or performing?

ME: I would say I take equal pleasure in all three because they are all a result of each other. The writing process is great and it gets better when you see the realization of that song in a finished recording or a performance on stage. I really do love all three.

SR: I’m curious, did you on this EP bring in any other backing vocalist or players?

SR: You’ve released your EP, appeared as a guest on TMIRadio KWSS, and have been out playing around town locally to support the new release – what is on your agenda for the rest of 2015 and on into 2016?

ME: We were on Ch. 5 for the “Paul’s Car Wash” benefit playing the new tunes, we are set to appear on the “Dreamweaver” show on Radio Phoenix. The CD release party is set for Jan. 9 at Pho Cao. The planning has begun for a new video, which we hope to have ready in the coming months.

We definitely will be playing a lot of shows around town and we hope to do a few out of town and out of state as well. We are sending the record to as many radio stations as we can think of for airplay and we are continuing to send press releases to press outlets letting them know where they can listen and buy the album. We will also be doing more radio/TV appearances wherever people will have us. After all that there will be a new single in the New Year and we will head back into the studio in the Spring. We are also very active on social media so you can always follow us for updates.