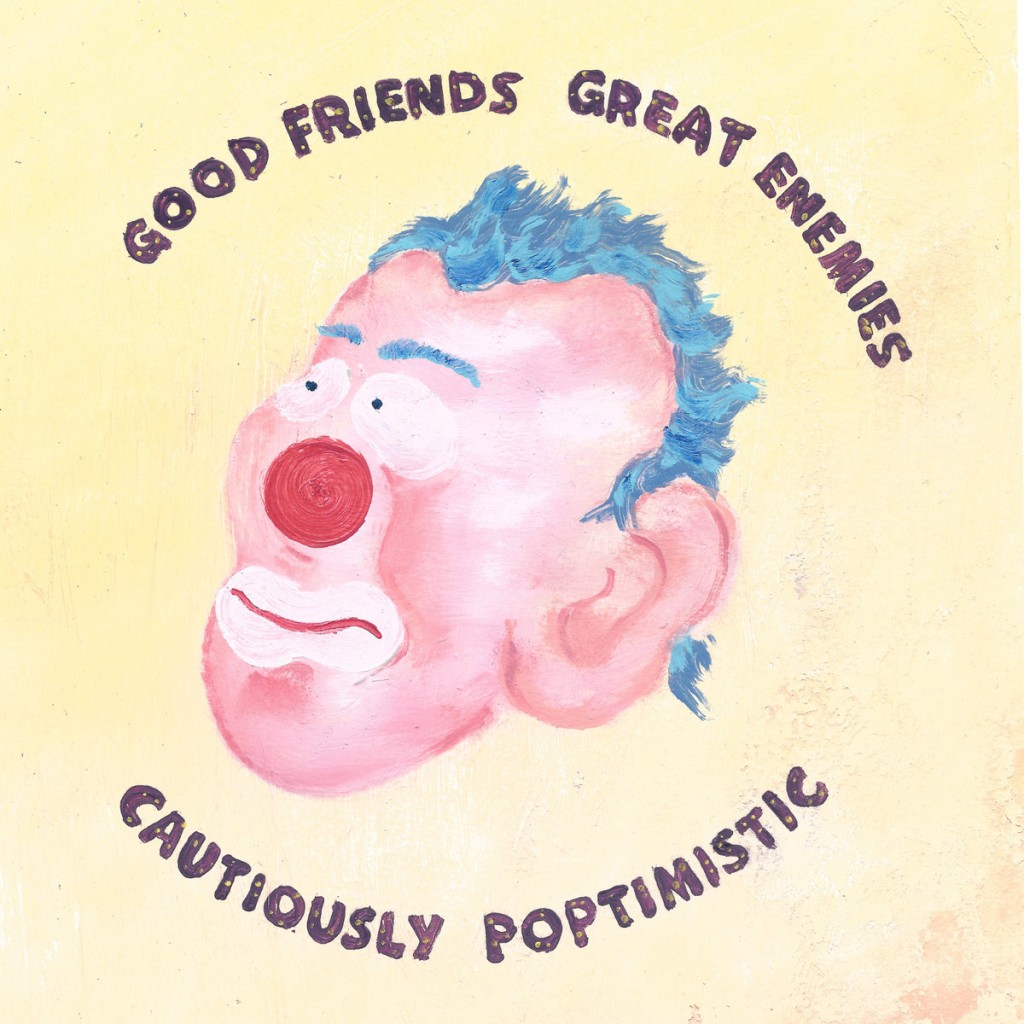 I’ve been a fan of Good Friends Great Enemies ever since their 2012 self-titled debut, a release that went on to win our award for Album of the Year. Since their inception the band has continually pushed their own boundaries, exploring and incorporating different genres into their overall sound. Their most recent release, Cautiously Poptimistic, is the culmination of that effort; seamlessly fusing elements of classic rock, jazz, and psychedelia into a 15-track collection of genre-blending goodness. I think we once again have a serious contender for Album of the Year from the Good Friend Great Enemies’ camp.

I talked with Evan Bisbee about Cautiously Poptimistic and what’s next for Good Friends Great Enemies.

YY: Where did you record this album? Tell me about the recording process.

EB: We recorded most of the album at my house in Tempe before it was too late at night so my neighbors wouldn’t get disgruntled. Some of the shorter songs we did at the old band house a few years ago. A few of the tunes (tracks 6, 12, and 15) we tracked the rhythm parts at the currently under-construction branch of Crêpe Bar in Tempe. We got pizza from the place next door and they really got a kick out of us “having a show” inside the plaza.

The recording process was pretty drawn out. We recorded a number of the songs at the old house with different arrangements and recording styles etc. Random Happenings was meant to be a lot longer but we got impatient and released those four songs as an EP. Then I made a whole bunch of creative choices with the project that set us back a little but we figured it out! Re-recording songs was frustrating at times but the patience paid off, I’m happy with where the project stands now.

YY: Who performs with GFGE? Who appears on the album?

EB: Currently the band consists of me [Evan Bisbee] on guitar and vocals, Max Greenwald on bass, Bryce “Peasoup” Broome on drums, Zack Parker on lead guitar, and Eamon Ford on keys.

I play all the keys on the album, and Max and I switch between bass and guitar depending on the song. Max also plays the acoustic/nylon when they’re in the mix, and he played the mandolin on track 13. I do most of the auxiliary percussion, though Aaron Mortemore played aux on track 11. I do the vocals and harmonies and busted out the ol’ trumpet on track 11. Isaac Parker is on upright bass on track 7, and he also manned a guitar pedal on track 3. The most notable contribution on the record comes from our favorite tenor sax player, Joseph Amos, aka King Duck.

YY: This is my favorite album yet from the GFGE’s camp, which is saying a lot because the 2012 self-titled debut from the band still gets more than its fair share of air time down at YabYum HQ. Your first release drew a lot from classic rock influences. What do you feel has had a noticeable impact on your evolution of sound?

EB: The first release was definitely steeped in my then-recent discovery of all things classic rock. I still have a real soft spot for that style of music (thus the birth of Witch Cackle), but I have always had more influences than that. It was fun to write a verse-chorus type song and give Max the space to shred the gnar while we all rocked out. [It was] fun [at] live shows doing that too! With Random Happenings I was trying to write more nuanced songs, but still maintain the rock and roll. With Poptimistic I made the switch to guitar pretty much full-time and with it came different song structures and arrangements. There’s a lot of music out there, it’s almost overwhelming. I guess I’ve just tried to keep my ears open and work with elements of styles that I enjoy and can wrap my head around. Fusion is fun and challenging, but there’s also something to be said about having a clear aesthetic and shooting for it. We tend to flirt with both methods I think.

YY: Your sophomore effort, Random Happenings, was a collection of pensive, meandering tracks while your first album adhered to a more strident song structure. It seems as if you found a happy medium between those two modes on Cautiously Poptimistic. Do you feel like that is an accurate assessment of the GFGE evolution? What have you learned from previous releases and how has that informed your current release?

EB: I think you nailed it! I’ve maybe answered some of this question with the ones above, but certainly the other releases have informed and guided my choices. You better believe the next album won’t take 2 1/2 years to complete, I’m done with that kind of timeline! Better knock on wood…

More than my own music, it’s the other people I’ve worked with that have informed me. I’ve learned and grown as a musician and songwriter by working with Wavelengths, Elevator, Roar, Paper Knife, and everything in between! Everyone has a unique musical perspective, and no one is right or wrong, I love it. It’s like a never-ending conversation to be a part of.

YY: Let’s talk about the title. This album is more “pop” than previously releases (especially with the presence of the keys), but I wouldn’t call it “pop”. What are your reservations about pop music? Where does the “caution” come from?

EB: It’s not so much that I have reservations regarding pop music than it is a lighthearted nod toward both the musical direction and the overall tone (lyrically and otherwise) of the album. The title hit me during the recording process and I really got a kick out of it. Not to mention both Peasoup and myself had some pretty intense car accidents while working on the album that set us back a little time-wise (and cemented our suspicion of the Good Friends Curse). I just like that the title can be read in a few different ways, depending on what you’re looking for in it. Puns abound, you dig?

YY: So, the band is cursed?

EB: I hesitate to talk about it, I’d hate to put you in harm’s way…

EB: I plan to take the band out on the road and get to recording new songs pronto!