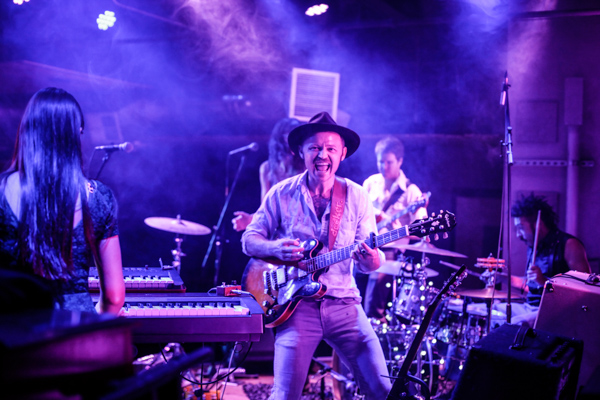 This past year has been so serendipitous in the world of decker. Even though we all shared some ups and downs together (as life will do to us all), we released our new record Patsy to amazing reviews, rocked two national tours (Spring and Fall), a midwest tour in July, and grew closer than ever as a band from all of these experiences. Our motto is to “hug-it-out” every night and say I love you to each other because we really do. And because everyone on this squad is an adventurer and lover of life, it made all of this time flow and fly by and gave us all a lifetime of memories to take home with us.

I decided that with this article it would be awesome not to just hear from me about my experiences, but rather have everyone tell their own favorite story to get a grander perspective of what life on the road with decker. is like. So with this, let’s meet the band.

Andrew Bates is the bass player in decker. Andrew is a kind soul, and usually offers a unique perspective full of insight. He really brings the “I wasn’t even thinking about that” moment(s) to life in conversation. I actually had the pleasure of sharing double duty on the Fall tours with him (also backing Lara Ruggles), and he was up for two great sets every night without question. So without further ado, let us hear from “the Govnah:”

“There are too many instances to count to be grateful for on the road but this one in particular sticks out to me. We had just finished unloading at a smokey little dive called the Mercury Lounge in Tulsa, OK and I noticed a really tasty looking Italian restaurant across the street. I privately lamented that I did not have the time nor money to eat there and went inside to play our first set with Lara Ruggles. I came outside after we finished to smoke one of the cigarettes that you smoke instead of eating, and there on the table were 6 takeout containers of some of the most delicious Italian food I had ever tasted. The owner of the restaurant had brought it over and invited us to come stay and eat and party at his house the next time we come through town.” 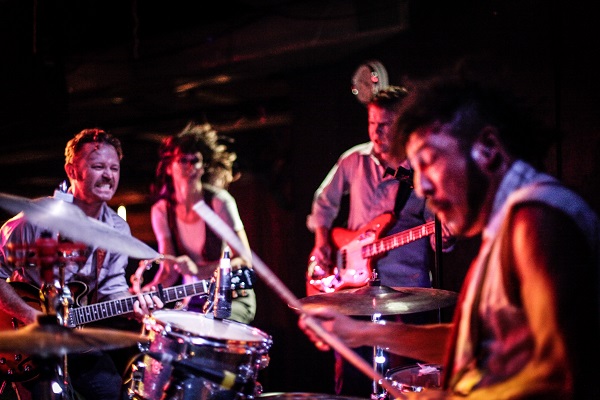 Next we hear from Amber Johnson. Amber is character all within herself. What I really like about Amber is that she doesn’t take BS
from anyone, except for maybe Brandon (but don’t we all). She also is an awesome piano teacher, so we connect on the educational level. Let us now hear from “Side-Hug:”

“This tour had really great dance-party moments. Five or six couples waltzed–really waltzed–to a song in one of the California coast towns. Some of my bandmates had an impromptu party, complete with streamers and rhythmic gymnastics, to our friend’s band (Dave Menzo–so good) in Detroit. I tried to steal a photo, but while the stage’s overflow lighting was perfect for the moment, it eluded the iPhone camera. At one of our last shows, in Jamestown, Colorado, the three cutest girls who ever lived danced to Lara’s set by jumping up and down in a circle, the littlest one trying her best to keep up.”

What do I say about Lara Ruggles? She is awesome and it has been a pleasure getting to know her since July 2015. We met her and Art (our tour manager) in Jamestown, CO, and I remember her saying “I know we all just met, but I feel really good energy coming from everyone and I hope we are able to do this many more times,” during an amazing Ethiopian, family style dinner provided to us so generously by The Merc. We have now done 3 tours together. Let us hear from Lara “like Sara” Ruggles “like snuggles”:

“One of my favorite memories from tour was the night we got to camp in the Redwoods. We walked about 1/4 of a mile down this path in the dark and huddled together in a group and looked up at the stars. They were so bright it was almost like a blanket, there was hardly any dark space in the sky. We were geeking out on how when we looked down at each other and at our hands in front of our faces, we couldn’t see anything, but when we looked up at the sky, it was so bright. It was a magical night.” 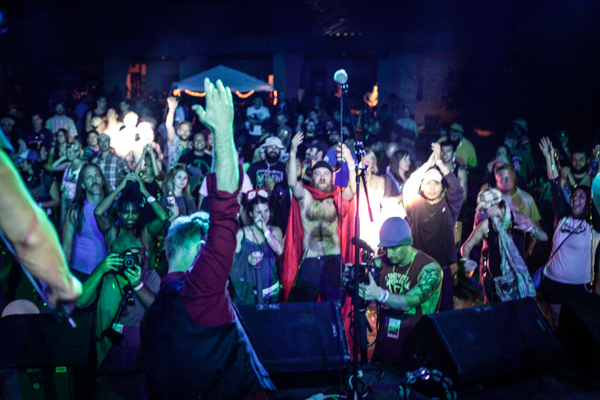 Let us now hear from Brandon: “The every man”, the myth, the mustachio, the lyrical genius, the first shift driver, the keeper of cleanliness, the stylish hat wearer and the purveyor of positive. I can’t say enough about how much respect and love I have for this man. He is the one of the hardest working dudes I know and delivers an amazing performance every time we step out to play. It’s now time for “The Daddy” to share:

“I’ve been touring pretty frequently since December of 2009. I’ve done, I’d guess, somewhere north of 30 tours. I can truthfully say this US tour, our second full one this year, was the best tour I’ve ever had. In terms of the music and the live show, the players, the fun we had, the response at the shows, the weather – just everything. I’ve got quite a few lifetime memories to take away. But what am I most grateful for? Hands down New York (Even Yab Yum themselves were there which was a wonderful surprise!). Everything about New York is big, it’s magic. We were so fortunate to end up in this great room, Rockwood Music Hall, for the second time this year and have a pretty packed house again. The room was electric and the band rose to the occasion gratefully and enthusiastically I’d say. But it was even more than the music. It was the perfect fall air, the leaves in Central Park – I’m telling you it was like a movie. And for a change, a good movie with a happy ending! I did almost get jumped/mugged in the middle of the night the first night there but the magic was with me and alas, I evaded the scenario. That’s how magical it was. I’m not bullshitting.”

Art Heffron, our tour manager, is a one of kind guy. Full of passion and drive, he always brings up the level of any situation. A true romantic and poet, Art always sees the beauty in situations, and manages to capture so many awesome moments with his lens. I love his perspectives and desire for beauty in life. He is also a talented flute player, and the best frisbee player I know. Let us speak with “Uncle Tuna” (a.k.a “The Juice”):

“It’s nearly impossible to nail down one favorite tour memory. I think my number one favorite memory is getting to host the band 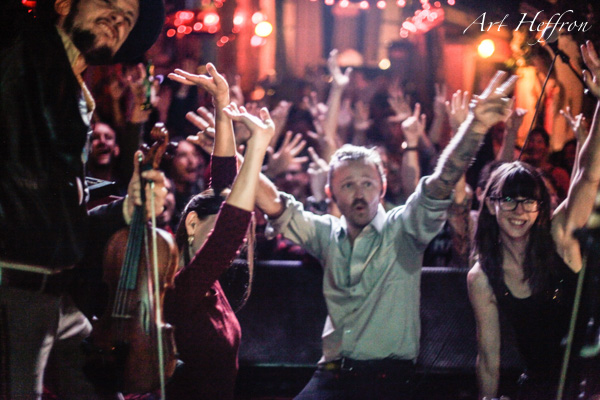 Bottom of the Hill (San Francisco)

when we returned to Colorado. Everyone’s spirits were immediately lifted as those Rocky Mountains got closer and closer. You could just feel a nice weight being lifted as everyone was getting excited for the last week of tour. It was extremely special to me to turn our house into a place of hospitality, as it’s a big dream I have for our space in Boulder. Maybe we didn’t have the largest breakfast, maybe the coffee was a little too cold, maybe the ground was a little too hard; but I did love sitting in the backyard with everyone sharing some bowls. This was immediately followed by some epic CO shows in Jamestown, Denver, and Fort Collins. All in all, I loved having my family and my peeps here with me in Colorado, as it was super special.”

I will now tell it from the drummer’s perspective. They call me “The Biz.”

My favorite memory comes from Uncle Tuna. We were in Philly, and were hanging out after the set at Bourbon and Branch and singing old soul tunes in our friend’s living room. Things got pretty dicey, and we were making Tuna sandwiches (Earlier in the trip, Art was eating tuna in the van and he drank the tuna juice from the can. Never seen that before.). Art decided to pour the juice in a shot glass this time, and threw it down like it was tequila. Needless to say, there was a reaction from the peanut gallery. A few days later, we’re listening to Asiz Ansari in the van and he started describing this weird roommate he had whose room always smelled like tuna. He went on to say that this roommate would shoot the tuna juice like a shot of tequila, and that he also played the flute. We were all sitting there in the van in awe that we serendipitously decided to listen to a Pandora comedy station and this bit came up. We just died laughing and Uncle Tuna had his potential doppelgänger moment of glory.

All in all, the tours were amazing. We swam in rivers, lakes, the Pacific Ocean, camped in the Redwoods and connected deeply with nature and each other. We decided who each persona in the van would be if they were an “Arrested Development” character. We played amazing shows almost every night, and we reached a new level as a band and as individuals. And it was all topped off with an epic sunset set at ALMF. I cannot express how thankful we are for all the awesome “magic moments” that happened along the way. Every experience felt like it was meant to be and that we were on the right path. Next year we do it all again, with bigger and better in mind. Thank you Serendipitous September and Organic October, you have forever changed our lives and I can’t wait to see what the future holds! 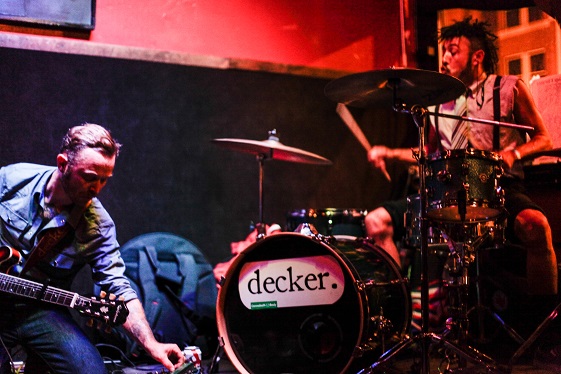