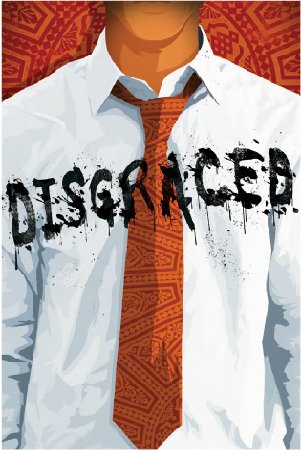 The Arizona Theatre Company is up to their old tricks: presenting award-winning plays that leave theatre attendees pensive and talkative about today’s hot button issues. Disgraced, their most recent incarnation, provides a critical and multi-layered examination of Muslim-American identity in contemporary Western society.

Playwright Ayad Akhtar creates an intentionally convoluted character in Amir Kapoor. The audience, like the protagonist, struggles with the politics of personhood and the prejudices we all hold. This Pulitzer Prize winning drama addresses everything from acculturation to Orientalism, from Jihadists to Jewish-Arabic relations. This is a no-holds-barred sort of dinner party so “get comfortable with being uncomfortable” (to quote Jillian Michaels).

The cast of Disgraced comes through with shining colors. I can’t say any performer outshined the rest (and usually I can and do). Richard Baird, who first earned my regard when he stole the show as Mercutio in the ATC’s production of Romeo and Juliet, returns with another stellar performance. Elijah Alexander (Amir) and Allison Jean White (Emily) star as the mixed race couple pushing, and breaking, the bonds of their marriage. Their portrayal moves between love, anger, and alienation with poignant accuracy. Vandit Bhatt and Nicole Lewis, along with Allison Jean White, make their ATC debut in Disgraced. I’m hoping all three return for future productions.

The show runs through November 29th so make sure you get your tickets sooner rather than later. Next up for the Arizona Theatre Company is David Sedaris’ The Santaland Diaries starring the Valley’s one-and-only Ron May as he relays this tale of Elf in Macy’s Santaland display.

More information on Disgraced and upcoming productions from the ATC can be found through their website here.