Leslie Barton. I love performing stand up comedy at various local open mics and out of town shows, when I can get them.

In 2009, at an open mic in a wig shop downtown and at the also defunct open mic at The Hidden House. One of my first jokes was some rambling indictment of an overly large Great Dane I had seen being walked down the street by its owner. “Dogs this big should have to wear pants! Why is he not working in an office, because it looks like he’s the one in charge.” I don’t know if I’m any funnier, but I’ve had more practice since then.

Watching a comic with great crowd work and timing. And, at the same time, watching a comic absolutely bomb. Also, sunsets and long drives for thinking time. And binge watching Disney films. I wouldn’t say I enjoy watching the news or news sites, or social media, but it’s a source for humor, nonetheless. Also, my Rush Limbaugh-loving, Republican-voting, South Park-watching father is an eternal inspiration. I wish my mom was still alive, she still inspires me every day. For relaxing fun, I enjoy talking to my dog, reading books half-way, and creative visualization.

The friendships and camaraderie I’ve witnessed and become part of, either while in the music scene or in the art scene or the comedy scene. I also like how easy it is to travel from here to other cities or states. I mean, once I get my car worked on and can pop over to Tucson or Flagstaff or Austin or Los Angeles. 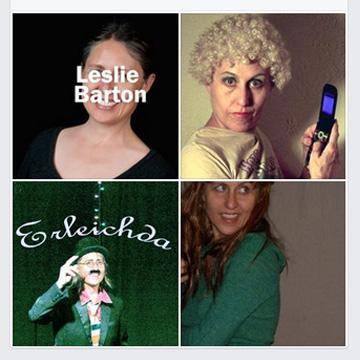 When I’m not acting manager at Bragg’s Factory Diner, there are a lot of great open mics. Check out my facebook here or Twitter here. I try to stay updated where I’m performing sets. Check out The Rock on Mondays; Dos Gringos in Tempe and Hashtag Comedy Corner on Tuesdays; Toso’s and Stand Up Scottsdale on Wednesdays; Third Space, Monkey Pants and Chop and Wok on Thursdays; Catalina’s on Sundays.

I’m also excited and proud to be accepted into the Big Pine Comedy Festival happening in Flagstaff on Oct. 7-10. Check out the website here for a list of the great local and national and international comics all vying for top prizes, plus it will just be a great time.  I’ve also got a new writing column in the Trunk Space zine called The Ten Dollar Bill.

A lot more of life, for sure. I figure on average I’ve got anywhere from 1 day to 40 years left. Touring with comedy, either with other comics or alone, make a comedy album, create a podcast, paint a lot more paintings, start up another band, fall in love, make a movie, encourage other people, travel, write, eat good food.

I’ve got a few I say in my head everyday: Let’s fuck shit up! Do I really need to buy that? Hey, love yourself first. Nobody owes you anything. Be reliable. And, when is this asshole going to shut up?