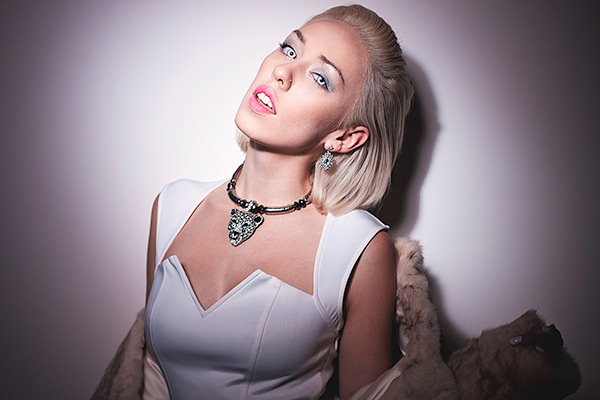 Song River: I was sitting in the early morning hours listening to Super Nova.  Your first EP release showcases a lot of diversity. How close is the expression you’ve given on Super Nova to who you are personally?

Luna Aura: Diversity is just natural for me. I am a little crazy, and I’m proud to admit that to the world, but I’ve never been somebody who has felt the urge to hinder myself or my music to one solid theme. I understand that a lot of people like pretty packages. Most people find comfort in being able to label people, places and things, but I’m not trying to make people feel comfortable. I have a lot of messages I’m trying to convey, and I change my style often to convey those messages. Super Nova is definitely an extension of who I am as a person, and I’m happy that I’m allowed the ability to be as creative as I want to be.

SR: You seem to have a strength inside you that feels deeply. How closely is this strength tied into the roots of your family and some of the events that have transpired? (If you are comfortable talk a little about your brother here. And how are you living to help keep his spirit alive?)

LA: I am incredibly close with my family, and I am so happy that people can feel that through my words and actions as an artist. I am so blessed to have such a loving and supportive family, and a big part of what I do is for them. Losing my little brother in January was and still is the most difficult thing that my family has had to go through, but being so close to one another has made it easier to deal with. It made it easier to realize that he’s still here with us, and he inspires every little move I make. It’s as if his hand is on my back leading me every day, and I have the responsibility to share that positivity with the world.

SR:  Your lyrics bring a connection to the youth of today. How important is it to you to identify with today’s young people/adults?

LA: I have always felt a deep connection with teens. I’m only 21 and I’m not too far off from the teens that come to my shows, so the connection is definitely there. I looked up to so many incredible female artists growing up and I’ve always wanted to be like them artistically, but I never had anyone telling me that it was okay to feel like a complete weirdo… which I did… every day. I just want kids to feel like it’s okay to be expressive and different, and screw society’s standards of what is beautiful, what is normal, and what is cool. There is nothing that can kill you faster than living a normal life, so just do what makes you happy.

SR: Watching the video to “Dancing with Your Ghost” brought a smile to my face.  Love the feeling to the whole presentation. Were you possibly calling in on speed dial to Diana Ross?

LA: Absolutely! You’re actually the first person to call that out! When I was writing the song with Brooke Ross and Eric Sanicola, I couldn’t stop thinking about a roller disco in my head. It was obvious from the start that the video needed to have a playful, Diana Ross/Cher, disco vibe to it. Being humorous is so important to me, as well. I never want to be taken too seriously, and there really  is so much to laugh about in life so I’m happy the video was able to bring a smile to your face.

SR: What brought the idea to meld the dance vibe with the feel of a ’70’s disco ala skating rink? (Also, where is this skating rink? And can you really roller skate?)

LA: I knew what I wanted to do from the second we started writing DWYG. I couldn’t get the image of a 70’s disco out of my head, and I usually run with the first thing that comes to mind. The only way you can ruin a great idea is if you think too much. I met up with the director, Cole Kiburz, and he was able to take that idea and help me create the details that would eventually become the video. We filmed the video at Great Skate in Glendale, AZ. My manager was actually the only person who killed it on the skates at first, but we were all pros by the end of the shoot!

SR: Luna, “Radio,” even embraces another side of you, both auditory and visually. You never seem afraid to step out of the ‘norm’ box of expressing yourself.  This video could have easily taken the “boy meets girl-falls in love- car ride into the sunset” but that wouldn’t have been you.  Where do your ideas come from?  And how do you collect all your ideas and find places for them to live, breathe and have their own existence?

LA: My ideas stem from my brain as funny as that sounds. That’s the best part about being expressive. The norm is literally an afterthought when you let your imagination take control. I have this theory that adults have a thick veil over their eyes that keeps them from seeing, hearing, and feeling honest ideas and emotions. We’re all conditioned to think in the same way, hence the whole “boy meets girl-falls in love- car ride into the sunset” scenario you brought up. I try my best to think like a child when I am coming up with ideas for music videos, and it always turns out a little weird. That’s okay with me, though.

SR: Music and the arts are a living and breathing motion of thoughts/ideas/expression/perceptions… do you find them just as relevant today in our culture, do you feel they will continue to evolve as technology morphs?

LA: I don’t know if there will ever be a time when music and the arts become irrelevant in our culture. I feel as though artists are able to make even more creative decisions nowadays. There is no sense of control from anything or anyone, and as time goes on and technology continues to grow it’s only going to get better. Artists can now have a voice and a career that is completely self-sufficient, and it truly is the time of the artisan once again.

SR:  What are some of your favorite forms of art (outside of music)?

LA: Any form of writing is so interesting to me. I know that music is essentially writing, but I’m so enthralled with writing in all its forms: Books, television, films, plays, magazines, blogs. Anything that allows you to step away from your own reality and into another person’s thoughts. I do love any kind of visual art as well, especially fashion. There is nothing like expressing yourself through your style. Self-expression truly is one of the most important forms of art, and I am definitely someone who takes advantage of that.

SR:  You’re touring for this album release is taking you all across the states. How do you prepare yourself for long tours, maintaining your vocals, and connecting wherever you land?

LA: This tour is actually my first tour ever, so I’m nervous as hell. I’m not familiar with certain things that come along with driving cross-country and playing for people who have never heard of you before, but it’s incredibly exciting and I’m definitely ready for it. I am going to have to be very disciplined when it comes to my diet, maintaining my vocals, and overall patience, but that’s nothing as long as I get to travel and perform.

SR: Reading up on your professional name, Luna Aura, how did you come upon that name?  Are you a comic book reader and video gamer as well?

LA: The name “Luna Aura” came from a Marvel comic-book character named Luna Maximoff. She had the power of ‘Aura Vision’, which was the ability to sense, remove, and alter the emotions of others at will. As an artist and musician, that is your power. I felt very close to her story, so I adopted her name. I don’t have a ton of time to read much of anything anymore, but I do love comics and graphic novels, and I’m excited to have a little time to catch up on some stuff while I’m on tour. I’m more of an arcade rat when it comes to playing video games, I’ve never been able to get into the new games.

SR: Do you take the imagery of who Luna Aura is as a character and add who you are to the mixture?  And what will you do when the CosPlay industry starts portraying you as one of their comic images?

LA: Luna Aura as a creature… is a whole other story. She’s that part of me that is constantly silenced by all the other parts of me. She’s the wild, outspoken, unapologetic side of me that gives me the power and courage to stand on that stage and say exactly what I need to say. I like to tell people that she’s really adopted my body as opposed to my body adopting her. I’m still the little girl I’ve always been inside, but I’ve changed and the name just makes it more concrete. I really hope the CosPlay industry pays enough attention to me to start portraying me as one of their images! That would be so bad-ass!

SR: Fashion/Music and evolving oneself go hand in hand.  How comfortable are you Luna stepping forward and taking on the next adventure?

LA: I’m not sure if comfortable is the word. I have no idea where I’m going to be in a year, and there’s nothing comfortable about that. But life is like climbing a mountain: If you spend too much time staring at the top you’re just going to trip over yourself and scare yourself out of it. If you focus on every little step in front of you, you’ll end up at the top when you least expect it. I’m proud of the woman who I’ve grown into and I’m happy to admit that I’m always growing and developing. As long as I stick to my guns and remember why I started this in the first place, I think I’ll be prepared for anything.