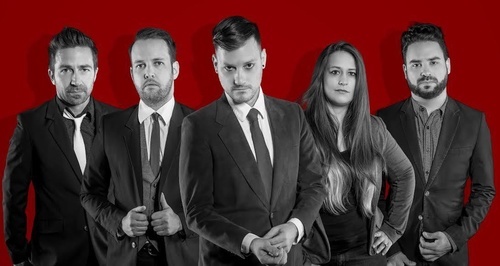 Song River of YabYum talks with Kelsee Ishmael from Harper and the Moths who are currently working on a new EP due out early next year.

Kelsee: Haha that might be true! Part of the reason we have used that term is because of the mood we want to create with our music. We want our music to be something that gets people dancing and having a good time-being confident and feeling sexy.

SR: How did the formation come about for Harper and the Moths?

Kelsee: Harper was living in Seattle when he had a rough break-up. It was a difficult time, but from it came some deep, meaningful creative juices started to flow between our lead singer Harper and our guitarist Chan. All the guys had been in bands together at one point in time and they wanted to start another project. Chan and Harper sent demo tracks back and forth with each other until they had the base for our first EP, Love Songs for the Damned. Shortly after recording and releasing the EP, Harper moved back to Phoenix. The guys played a few shows without me. I was in a band with our guitarist Chan and our drummer Nick, so I had been to all of the shows and knew about the band. After some discussion, knowing there were some keys and female vocal parts, they decided to bring me in.

SR: What is it within your framework of creating music that keeps who you are as a band together?

Kelsee: In lots of ways what we create does come from who we are as people. Musically, all of us like lots of different music genres that make its way into our style; everything from funk, rock, punk, new wave, etc. And Harper always does a great job of speaking his mind and heart in his lyrics. If you really sit and listen to the words, you’ll find some deep thoughts and emotions eloquently put together.

SR: Personalities at times can clash within any relationship. Whether it is a marriage, friendship, business relationship… stuff happens. How does Harper and the Moths handle the ups and downs?

Kelsee: We have this running joke, whenever there is a moment of tension, we always end it with “I love you.” “Your part in the verse really isn’t working, I love you.” Haha, it always helps to break the ice. But in all reality, we’re all good friends-we care about and respect each other a lot. We take the time to make sure we understand where everybody is coming from and talk through the issues.

SR: “Nighttime Tremors” blends a sanctified time of pop/rock/wave with a sauce of sexuality. Who wrote the song, did the video work, and produced the track?

Kelsee: One of the things I love about being in Harper and the Moths is the collaborative process we have with writing songs. We all wrote “Nighttime Tremors.” It was one of the first songs we wrote together after I joined the band. We were just having a fun time jamming at practice when it started to come together. From there we just continued to build on it until we were happy with it. The track was recorded and produced with Jeremy Parker from Premier Studios, which is always a good experience.

For the video, Harper came up with the main concept-vintage skate rink, people having a good time, relationships and love. We rented out a skate rink and invited some people to come help out. We had a main camera man and also had a bunch of GoPro camera’s. All of the band members helped out, made sure we got all the shots we needed. The night went by pretty quick and it’s kinda a blur, but it was a great time and we all had fun.

SR: Define the word “Indie” as you think it applies to your band.

Kelsee: It’s tough to nail down that word these days. It seems to mean something different to everybody. For us, we use it to describe a facet of our musical style and because we are an independent band.

SR: When I went through and listened to your songs, “Walking Through Fire,” “Chemicals,” “What Are We Giving Up,” etc… you’ve an electronic bent of dance, rock and funk that is strong in its presence. It holds a certain original mix. Early influences help define a sound, but how does Harper and the Moths set their own course of being their own sound and style?

Kelsee: It’s tough to create a completely original sound and can be particularly difficult to judge when you are in the creative process, but we do have an idea of what mood we want to create with our music. For me, that helps me think about what type of ideas and styles I add to songs. But mostly, I think we are more interested in creating music that we put our souls into, that we enjoy playing and hopefully people will enjoy it, too.

SR: How important as you go forward and create new album’s is it to keep things fresh? Are you reinventing yourselves as you go along or can that be done nowadays?

Kelsee: We are happy with the sound we have now and want to stay familiar, but aren’t limiting ourselves to it. I’m lucky to have band mates that are always listening to new music and trying new techniques on their instruments. I think that gives us the potential for us to be always evolving, but only the future knows if the creative process will take us down the road of recreating ourselves.

SR: Is the band interested in producing and creating their own label?

Kelsee: As of now, there are no plans for starting our own label. We’ve been heavily focused on our next EP release and our release show January 23rd, 2016 at Crescent Ballroom. A few of us are interested in producing and would love to be able to pursue the idea of our own label, but as of now that isn’t in our immediate future.

SR: If you could hand-pick someone you would like to either produce or co-produce with, who would that be?

Kelsee: There would be so many people that we would love to work with. I don’t think any of us would be sad if we got the opportunity to work with Nile Rodgers. A lot of songs, albums, and projects he has touched has been influential to all of us.

SR: What you say about Nile Rodgers is so true, and the listener can sense his influence in your sound. Marketing today has changed vastly. Social media is the tool that is an essential, yet so often bands don’t have the time or the knowledge of how to use it best. How is the band looking to approach social media and merchandising?

Kelsee: We are always thinking about social media and how to keep it fresh. You can’t survive as a band anymore if you aren’t using social networking. When we approach the things we put on social media, we like to think about what we want to see on our own feeds. We try to keep it fun, put our personality into thing while being informative about what’s going on with the band.

Our merch is a similar approach. We want to sell art and designs that people are interested in that relates to our music. We have some great artwork on shirts and posters done by Justin Barker and we are currently working together on the new merch we are going to have for our EP release.

SR: Apache Lake Music Festival is two days of incredible music, share some of your thoughts on the up coming experience.

Kelsee: We are all very excited to have this opportunity. It’s a privilege to play with all the other great local bands that are in the line-up and to play for all the people that will be there enjoying the show. We’ve been putting our heads together to come up with some surprises for everybody to make it an unforgettable time and performance. We were going to make a grand entrance with a helicopter and fireworks and speed boats and mock explosions and dancing sharks and Katy Perry, but we’re set to be on the inside stage, so we canceled all of those. But no worries, we’ll still do something fun!

SR: LOL! I love the “dancing sharks” idea… but y’all don’t need Katy Perry! What songs and action might we be looking forward to?

Kelsee: We have been working on recording two new songs in the studio recently. They are getting wrapped up now and we are going to release them on the new EP, which is planned for release at our EP-Release Show come January 23rd at Crescent Ballroom. The line-up is getting ironed out now, but we have some fun ideas and people planning to show up! We will be posting updates about it as soon as it’s all confirmed!