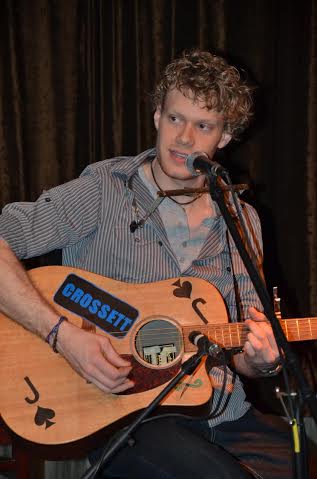 As singer/songwriter Jeremiah Craig grew up, singing around the campfire went hand-in-hand with the tall tales that always take shape in the blaze and under the stars. And, once he picked up the banjo, his own story soon began to write itself.

“My dad played guitar, and so did a few of my friends,” said Craig. “I wanted to be different, so I chose banjo. I stuck with it. I drove my parents nuts, playing the same songs over and over, but I stuck with it.”

Craig progressed in his playing, winning the high school talent competition where he made his public debut. Soon, he formed a bluegrass band with his friends, calling the jam session Bluegrass Tuesday.

Craig remained nervous playing banjo until he reached college with Jack Swift, his group at that time.

“With them, we performed and played so much, I didn’t have time to worry or get nervous,” he said. “It was a jazz-rock group, heavily dependent on improvisation during the song… I was too busy paying attention to the band, and what the song was doing. I got caught up in the moment, almost like a trance. Ever since, I really didn’t pay attention to or worry about crowds. Besides, if you mess up at an improvisation show, that’s what makes it a jam. That’s what makes it different from the last time the song was played.”

Another aspect of Craig’s music which sets him apart is how it relies heavily on lyrics and storytelling – drawing back to the tales weaved around his family’s campfire. He draws inspiration from a mixture of what happens in the world around him, also adding a ‘what if’ twist of a new idea.

Take a Jeremiah Craig original fan favorite, “The Man in the Suit of Mirrors.” The song was actually inspired by a mattress commercial Craig saw where the salesman made a bad joke about the economy being so bad people are hiding money in their mattresses for safe keeping. Craig wondered, what if someone actually did that? And what if a con artist talked their way into their home and stole the cash?

The title character in the song wears a suit that is familiar to you and helps you bring your guard down. In the story, he enters a large party, held by a wealthy man in town:

Gerald Smithson owned the mine down the hill
He held parties as he pleased
After a little ale, he told the man in the suit
That his wealth made him sleep easily
The man in the suit finds Gerald’s wife, and begins to flirt with her until she offers a tour of the house:
She giggled and flirted as he jested his way
Through different rooms she would lead
Till they came to the bedroom where he sat on the bed
It was a good mattress, indeed.

The song, much like his others, spins an intriguing tale the whole way through.

“That song is like reading a book,” Craig said. “You have to follow the story from beginning to end, or you risk losing the story.”
Craig understands that in some louder, larger venues, people may be having conversations rather than following the song. It may not have the best results for the set he is playing.

“I thought about whether I should stop writing those songs, or writing less of them,” he said. “But no. There are a lot of people out there, looking for those kinds of stories… music fans in ‘story mode.’ Those people – out for imagery, word usage, everything a story has to offer – are who I really play for. I’m not going to go away from that. It’s about when you get that moment of silence from the crowd; you know they’re with you.”

Craig challenges himself during every set, particularly in those loud, busy settings.

“What can I do in the song, so that they just stop, and listen to you?” he asked. “That’s what I try to work toward. And once you get there – that moment of silence, when they feel what I feel – then you are doing great. That’s what I work for during every show.”

For Craig’s latest album, Lost Keys in Lounge Strange, he put away his customary guitar to return to his banjo roots.
“It was my first instrument, and it’s really special to me,” he said.

Criag said Lost Keys in Lounge Strange would not have been the same without Jake Boucher, his friend and musical colleague who played bass and percussion for Craig on the album. Craig met Boucher when he was recording an earlier album, The Commandeer. He needed an upright bass player, and the two hit it off right away.

“Jake has an enormous respect for old blues and raw soulful music,” Craig said. “We have that in common. He was able to bring a lot of that style into the Lost Keys sessions to round out the songs on the low end. He also helped immensely with the production of Lost Keys, not only by being a second pair of ears to help, but also by coming up with ideas for percussion parts and microphone placement to really take the songs to the next level, musically and emotionally.”

Another original take on Lost Keys in Lounge Strange is the story the album tells, centered on a visiting traveler in a seedy bar who has lost his keys. In the first track, the barkeep advises him to travel around to visit with the various regulars around the bar, listening to their stories and the keys will surely turn up along the way. Each song is a patron telling their tale… and each one grows taller and more farfetched than the last.

“Those different ghost, alien, and monster stories are perfect for campfire settings,” said Craig. “That goes right along with campfire stories, even if it is set in a dive bar sort of place.”

Craig said his inspiration can strike at any time, and any place. Some songs from Lost Keys in Lounge Strange were inspired by a podcast he enjoys called “Mysterious Universe.” Featuring subjects ranging from aliens to Bigfoot, he said it is a very entertaining source of inspiration. Other songs from the album were inspired by a variety of muses, such as a dream he had, as well as established songs from earlier greats, which Craig re-wrote to make his own.

Through the stories on the album, Craig uses many tones, tempos, and even different voices to portray the various characters who tell their stories.

“The most difficult part of performing for me is, in a way, channeling the message of the song,” he said. “The personality traits of my song’s main character, and altering my voice from song to song, like an actor who takes on their part. I want to take on the part of who the song is about. It’s easy to do in a studio, with time to get prepared and multiple takes to get the sound right; but it can be really rough onstage. It helps when the crowd is into you and your music, and paying attention.”

Although originally from Rochester, New York, Craig spent a number of years in the Phoenix area before relocating to a new home in Seattle. He looks forward to reestablishing himself as a singer/songwriter in such a huge music city, but he still believes Arizona holds the biggest place in his heart for best place to perform and crowds who love and support original music.

“Everywhere in Rochester, everyone loves cover bands,” Craig said. “It gets hard for original acts. Everyone here in Arizona loves original music. Even other artists, they come and listen, and sometimes even jam with their fellow artists, and support them. I had no trouble at all setting up as a singer/songwriter in Phoenix. It’s really awesome; I’ve always respected the Valley for that reason.”

For advice to other performers and hopefuls, Craig’s tip is just to get out and play, and keep writing.

“I must have written hundreds of songs, way before you ever heard any from my first album,” he said. “It doesn’t matter if they suck or are amazing – it’s about putting the pen to the paper, or typing out lyrics, and then putting chords or melodies to it. Just do it… and don’t stop. Even if you know they suck, then you know how to make it better. It’s a laborious process, but it’s worth it. You know you can be good. And once you know that – and you put in the hours and stick with it – you can be unstoppable.”

Craig is returning to Arizona for a number of tour shows this fall. To see more on Jeremiah Craig, as well as hear Craig’s original tales and songwriting, visit his website here.