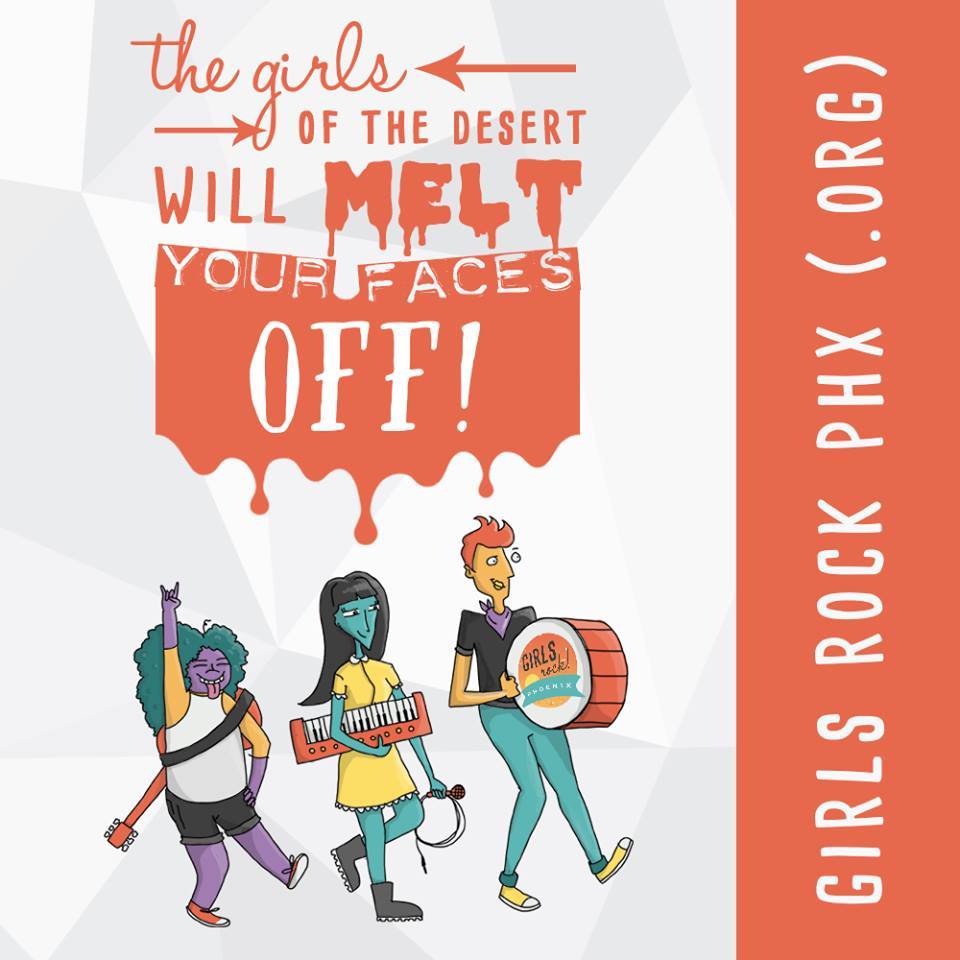 The newly founded Phoenix chapter of Girls Rock! is hosting their first public event this weekend to help raise both funds and awareness about this exciting edition to the community. Girls Rock!, a national organization aimed at helping girls build self-esteem through music education and performance, supports summer camp programs around the globe wherein young women learn an instrument, form a band, write a song, and then perform at a showcase. An empowering experience for a young artist if ever there was one.

I asked Sarah Ventre, President of Girls Rock! Phoenix, what campers can expect of a week spent with Girls Rock!

Ventre replied, “Campers can expect the best week of their lives!! They will come in on the first day not necessarily knowing how to play an instrument or even having any kind of musical experience. By the end of the week they will have learned an instrument, formed a band, written a song, and played a showcase. They’ll also be attending workshops on topics like body image or self defense, and learning in the DIY tradition through activities like zine making and screen printing. And the entire week, they’ll see and hear women as role models — teaching them instruments, performing for them, teaching workshops, and running the technical side of things. By seeing women in roles that are often given to men, it gives girls an opportunity to see themselves filling those roles from a very young age. It also reinforces the idea that they can do anything they want to, and they don’t need a guy to give them approval to do it. And it creates a space where women and girls are lifting each other up — seeing one another as collaborators instead of competitors.”

Ventre first became involved with Girls Rock! while she was living in Washington D.C. when a friend of hers volunteered for a Girls Rock! camp in New York. She then decided to volunteer as well for a camp in the D.C. area.

I asked Sarah what made her decide bring the organization to Phoenix when she returned to her home turf.

“So many things!!! The music world is really male dominated, and Phoenix is no exception. I kept thinking about growing up in Tempe, and feeling like I didn’t have access to our local music community until I turned 21. Then when I did turn 21, I only saw a handful of local bands with any women in them at all,” she began.

“I also thought about what it feels like when you’re growing up as a girl…it’s hard to feel confident or empowered about anything. Our society constantly tells girls that we’re not enough and we’re not worthy. We’re taught to apologize for being who we are, and when we try to do new things and find outlets for our creativity and self-expression, we get put down a lot. I used to think I had to wait to perform until I was “really good” at playing my instrument. But through volunteering at rock camps and really beginning to understand the riot grrrl tradition, I learned that you don’t need anyone’s permission to form a band and make music. And if I had been taught that at a young age, it would have made a world of difference in my teenage years and through to my adulthood. Now it’s time to grow this kind of an empowering, supportive community of women and make it accessible to young girls in the Valley.”

Already, the Phoenix edition of Girls Rock! has some notable volunteers involved in the program which plans on hosting its first Phoenix summer camp in 2016. According to Ventre, “Several local musicians (including Grace Bolyard from The Darling Sounds, Amy Young from French Girls, Jenny Weintraub from Sister Lip, Amanda Schukle from Steel Cranes, Alexis Ronstadt from Larkspurs) are part of our organizing team, as well as women who work at local venues/art spaces like Andrea Pederson from Nile Theater and Laura Dragon from {9} The Gallery, and a bunch of other women who volunteer in lots of different ways. We’ve also received sponsorship for our upcoming fundraiser from Kimber Lanning, and from Charlie Levy, owner of Crescent Ballroom and Valley Bar. Plus we’ll be working with Catherine Vericolli, owner of 513 Recording Studios to introduce girls to audio engineering.”

There’s still room for more volunteers for those interest in getting involved.

“For folks who want to volunteer at camp, we’re looking for women-identified, trans, and genderqueer or gendernonconforming folks who have an interest — no musical experience is necessary! We’ll need people to do everything from coaching and managing bands, to teaching instruments, to running workshops, to being roadies and moving gear, to helping with administrative tasks and organizing camp lunches! There’s a place for anyone who’d like to be there!!” Ventre stated in a message.

This coming Sunday, Girls Rock! Phoenix will be down at the Newton for a screening of Girls Rock! The Movie for folks interested in getting involved, showing their support, or just learning more about this worthy organization. Live music and a raffle are also included in the mix so don’t miss out! Tickets for the screening can be purchased here. Or, to learn more about the event, you can head here.