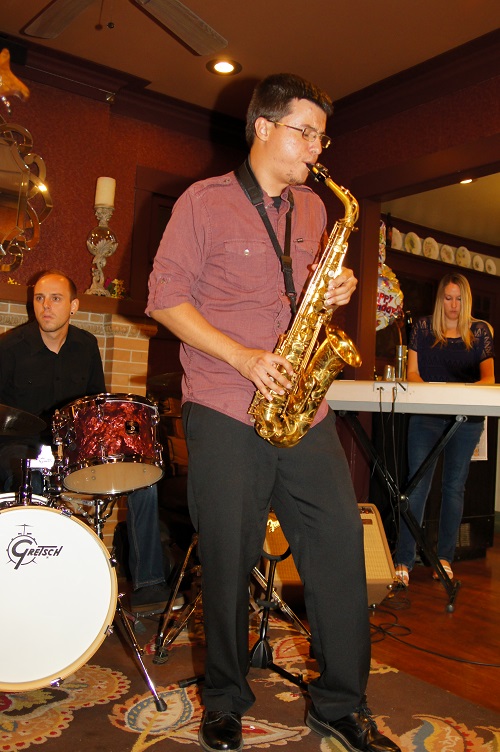 The Phoenician Four Jazztet can trace its origins to a different creature than the stylings you can see them showing off around the city today. But then again, adaptation and improvisation was how jazz itself was born – so they’re off to a great start.

The players first met while attending an open-door jam band in Tempe, known as Unified Fusion. This large group included singers, drummers, guitarists and bassists, as well as saxophone players. Then the day came when Unified Fusion drummer Joshua Enns got a gig through connections at a local venue, but the jam session group was too large for that set – so Enns chose a few players from the group to join him at the smaller gig. This smaller group included saxophonist Tony Salce and bass player Scott Harris.

For the music they played at the set, the trio revisited their classic jazz roots.

“We had this huge, awesome response,” Enns said. “One random passerby tipped us like $80, and went on about how much he loved young artists playing older stuff. We had a great thing, so we just kept it going.”

While Enns helped create this trio, the three also continued to play with the original jam band, Unified Fusion.

“As time went on, we kind of fused the two together – each band pulled from each other a bit,” he said. “We also brought a little jazz into Unified Fusion.”

Through the Unified Fusion jams, Enns, Salce, and Harris met cellist and guitarist Kristen Turner. Originally, Turner had intended to play cello, but when she brought along a guitar and revealed her skills on the six string, the trio gladly absorbed her into the smaller group, as well.

As time went on, Unified Fusion jams dwindled in size, but the newly-formed quartet was gaining more and more ground under their new name, The Phoenician Four. Through coffeehouse sets around the city, they grew in reputation, and began getting invited to play also at private events.

The group suffered a loss when they parted ways with bass player Scott Harris, but Salce knew the perfect person for the job – a bass player he had met through the last Unified Fusion show. New bass player Mike Willinger became the final piece of the puzzle for The Phoenician Four.

Since Unified Fusion had begun to fizzle down to this new quartet, they began using that time to practice jazz standards for The 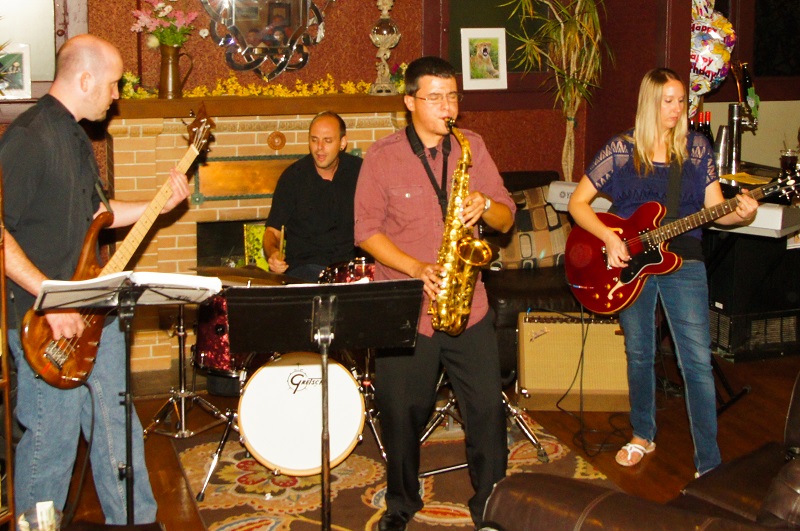 “I guess, in a way, we are the phoenix that came out of Unified Fusion’s ashes – their legacy,” said Salce. “The band solidified, took a left turn, and we made it our own – a jazz base, but with a twist.”

Since then, the group has begun to expand their repertoire with more variety, including Latin songs, and rock covers ranging from The Beatles to The Black Keys.

“I’d love to hear us do more originals, too,” said Willinger. “There are so many other things we want to learn, but we can only do so much in two hours. But we are pretty adaptable; we can pull out whatever kind of music we need for the occasion.”
Turner said her favorite part of jazz music is that it is a classic genre that never goes out of style.

“I love the complexity of jazz music, it keeps you on your toes,” she said. “Jazz also has a freedom for improvisation… There’s an exciting element that solos aren’t planned, so you have all this nonverbal communication going around. It requires a great amount of attention, flexibility, and understanding of band mates to get through a song seamlessly.”

Enns said his inspiration can come from many things, including his favorite albums. But more than anything, he gets inspired by watching other jazz bands play.

“I feel like we inspire each other as well, always trying to nail down a particular part and outplay each other,” he said. “The music we play is just a collaboration of songs we enjoy, and some songs we are asked to learn by people along the way. We also enjoy playing some of the most famous jazz standards, as it tends to get a rise out of the audience.”

For Enns, it all boils down to the performance.

“Listening and watching is really fun for me, and it ignites that fire in my soul,” he said. “When I watch a good drummer play, the next time I sit behind the drums I feel inspired and put every ounce of me into my music. I like to try new things that I see or hear other drummers do.”

Turner said another thing that inspires the group as a band is that no show or song is ever played the same. 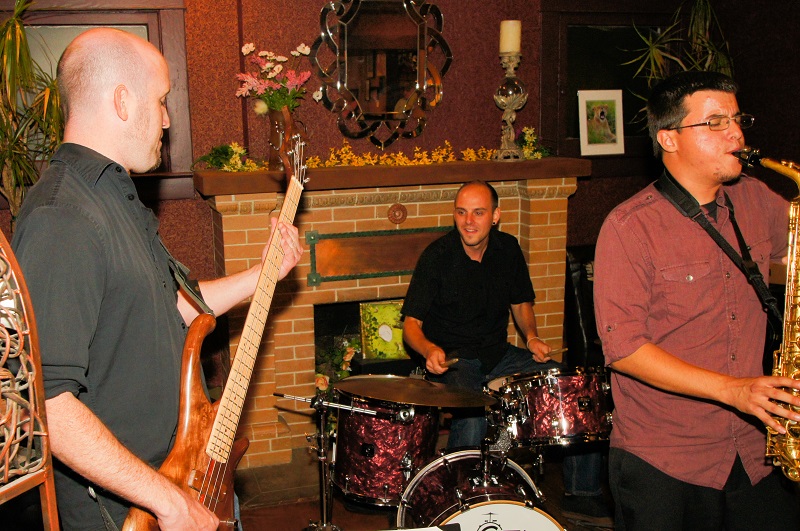 “Our sax player, Tony, solos differently every time, and our energies and dynamics change from show to show,” she said. “We are lucky in the fact that we are really in tune with one another, and have that ability to adapt and make each show a little different.”

The Phoenician Four has that versatility, and is ready to put on any kind of show – from larger party events in big venues down to smaller, quieter coffee shops, such as Hob Nobs and Elevate Coffee Company, where they perform regularly, reaching new fans and music lovers with their custom twist on jazz classics and fan favorites alike.

“I would like to reach the people that appreciate older jazz and swing,” said Enns. “It feels so good to talk to someone after a show that enjoyed it, when you can see and feel their enthusiasm. It’s great to see young kids who just started to play in school watch, and know that was me years ago. I love when someone who lived during the 20’s and 30’s stumbles across us playing, and maybe they will dance or you will just see that big smile across their face. To me, that is so rewarding. I guess my biggest wish would be if we were able to just play music for a living. If we had so many shows that all we did was play, and get better and better. I think that’s any musician’s dream.”