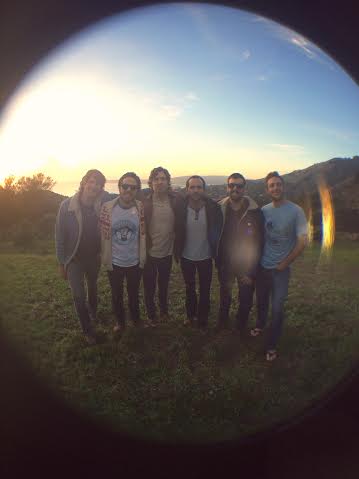 The San Francisco Americana act known as The Brothers Comatose can always be found a pick’n and always a’grinnin. At the center of the band sits the brothers Morrison, but all members have become part of the extended family. Pull up a stool, grab your banjo or guitar and listen along as Ben Morrison from The Brothers Comatose shares some good times with us.

Song River: Where was the original Morrison home? Describe what a typical evening back at the Morrison Homestead sounded and felt like. Take us back and paint us a picture.

Ben Morrison: We grew up in Petaluma, about an hour north of San Francisco. Our mom was in a band and they used to rehearse there regularly. They had lots of musician friends and would have parties every couple of months where everyone would sit around in the living room and pass around songs. We learned lots from those parties.

SR: Was there the typical pressure on either brother that when they were growing up… they had to play a musical instrument? Or was it something you both gravitated towards naturally on your own?

BM: There definitely wasn’t any pressure to learn anything. We just caught the bug from being around all that great music and those players. We had guitars lying around the house and couldn’t help but pick ‘em up and try to jump in there.

SR: Did you both grow up on bluegrass influences or was it a mixture?

BM: We didn’t listen to bluegrass at all growing up. We grew up on a healthy dose of classic rock and roll: Rolling Stones, Zeppelin, Kinks and Credence.

SR: Who were some of the regulars who would show up at the house to play?

BM: Local musicians that were in different bands around town. We used to have parties on Sundays when nobody had gigs.

SR: Do either of you recall a particular evening’s event?

BM: The first time I ever really sang in front of anyone was at our first music party. And from that point on they couldn’t shut me up.

SR: Share with us a bit about both of your musical progression. I read taking classes was mentioned, did you find formal training to be an asset in developing your own style?

BM: We all had training of some sort. Some of us (not me) went to school to study music…and some of us – Alex and I – took lessons and cut our teeth on chairs in the living room.

SR: Two albums and another one on the way… Title and release date? Where can we look for purchasing? How difficult at times is it to decide which song tracks to put on, and how hard is it sometimes to just have the faith to let it go to press and send it off?

BM: The title of the new album is “City Painted Gold.” We don’t have a release date quite yet…we’re still figuring that out. It can get difficult throughout the process to figure out which cuts will make it and which ones wont. I guess the best test is, if you’re not excited to play it, don’t put it on the album.  At a certain point you just have to let it go…or else you could end up working on it for years.

SR: “Songs From The Stoop” and “Respect The Van” showed a progression to where you are as a band now… what is this next album looking to do?

BM: Each album thus far has been pretty much a slice of what we’ve been doing at the time. “Songs from the Stoop” was all about moving to SF and hanging on our stoop and writing songs together. “Respect the Van” has to do with being on the road for long stretches of time. Our most recent album is about a changing of times. Things were shaken up a bit this last year with lineup changes…and changing back, and getting kicked out of our house in SF due to rent hikes. Things are changing in all of our lives and it all slips its way into the music somehow.

SR: Your style is Bluegrass. How close is it to true Bluegrass?

BM: I would say we’re more in the “rowdy roots” category. We have bluegrass instrumentation, but we end up pulling from all of our different influences – lots of rock, folk and blues influences as well.

SR: Whether playing live or a fan listening to a recording, how important is it for the sound to come across full of energy? A party sing-along in both environments?

BM: It’s extremely important. That’s our favorite environment and it’s of course easiest to create that in a live setting. It’s hard to convey that live energy in a recording, but I think we’ve done a good job on our most recent album.

SR: How is the San Fran area when it comes to homegrown style Bluegrass sounds?

BM: It’s great. There was the 70’s bluegrass and folk revival with some of the Grateful Dead guys getting involved in “Old and in the Way.” That definitely has an influence as well as the “Hardly Strictly Bluegrass Fest in SF” – which has exposed most of SF to new blue-grassy sorts of sounds.

SR: You all have packed your bags, loaded down the van, and once again are hitting the road. How many times across the USA have you all taken your music?

BM: Hmm…I can’t really tell you off the top of my head. Maybe a dozen times across the US. We spend most of our time in the Western US.

SR: How long is this tour expected to be? Any towns in particular you haven’t been to before that you’re looking forward to checking out?

BM: This tour is 5 weeks long…with lots of driving in between. We rarely make it to the northeast so we’re excited to get back there – NY, PA, MA & VA – we’re looking forward to visiting all those places.

SR: You offer a song book, so fans can sing-along. How often do you invite audience members to come up on stage and perform along with you?

BM: We made the song book so people can learn how to play and sing the songs if they want. Sometimes people have a hard time understanding the lyrics so we made an easy little guide. Lately, we’ve been bringing up ladies to help us sing a duet we recorded with Nicki Bluhm – “Morning Time”. Since we don’t have a woman in the band, we can’t really play that song, so it’s nice to be able to bring up an audience member to help us out.

SR: Good times. Obviously those times have stuck with you both, are now a part of your band as a whole, and a slice of the pie you want to share with others. If you all were to sum up your approach to not only life, but music what would it be?

BM: To quote the keyboard player from Spinal Tap – “Have a good time…all the time.”

SR: Lastly, there has to be a story behind the name?

BM: The name just popped into my head one day…though I think it was subconsciously affected by my brother Alex. When he gets into his banjo playing, his eyes roll into the back of his head and it looks like he’s in some sort of musical coma. It just kind of stuck after that.

You can catch The Brothers Comatose live at Last Exit Live on Friday, July 24th. Tickets for the show can be procured here. For more information on the band, you can check out the website here or their Facebook page here.