A Claire Slattery knows very well that everyone has their own unique taste in music, and most everyone likes to make mixes of that music to share. In fact, everyone knows that. But Slattery set herself apart by taking it further by orchestrating a massive mix-sharing event for her community, and beyond.

“The first time I did this project, I was kind of unsure why I was doing it,” Slattery said. “But it seemed like a good idea. It caught on a lot faster than I thought it would. I thought that if 40 people participated, it would be a good turnout. But the day I put it up, I got 35 emails in the first 24 hours. I knew I had created a monster.”

The first time she organized the event back in 2011, she called it “Make a Mix For Someone You Probably Don’t Know.” Over 400 people from all over the United States joined the project, as well as international participants from as far out as Germany and the Netherlands. This summer, she is hosting the project again, and according to the event’s Facebook page, Slattery is on track to having just as many people join in the fun this time around.

Like the first time, the project comes with a bit of a challenge for everyone involved. When you sign up, you are asked to email Slattery, along with three words to help serve as the inspiration for your mix tape. The words can be anything – specific or vague, related or random. But when Slattery finishes compiling her list of participants, she will send your three words to another random participant, while you will be sent the three words from another person in the project. It will be up to you to select, mix, and send the mix tape, inspired by those new words, back to Slattery, who will send it on its way to its new owner – in doing so, keeping everything anonymous. 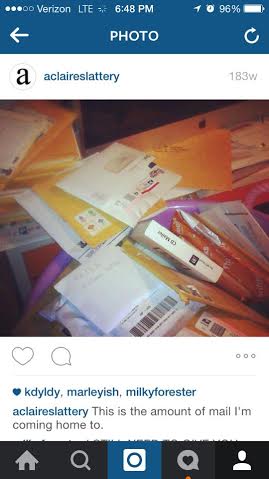 The tapes have started arriving!!

Slattery said the idea came to her during a car trip to Tucson.

“The coolest thing is how inspired other people got by it,” she said. “They got really attached to it; they went the extra mile with it. It really was a humbling experience. That’s what my art is about: letting people express themselves – be themselves – within the bounds that I create.”

Slattery is a community artist in Tempe, always hard at work on projects such as this, involving members of the community. She hosted a variety of local community projects around Tempe and other parts of the Valley. One project, held at Cartel Coffee Lab in Tempe, featured a map of her neighborhood, where community members can place colored pins into the map at the specific address where they have lived, with the color of the pin showing when they lived there. Slattery also hosts and facilitates an Instagram account just for her neighborhood. Each week, she sends a new resident the login codes, and lets that resident host the account for that week.

“I like to create things people in my community can get involved in, and help build,” she said. “I love it here; I’m committed to Tempe, as a place. People can come in, start a project, and get involved.” Slattery said nothing bothers her more than attending a local show or concert, and people around her stand there, stagnant. “There’s been a call for people in the community to step up and get involved, but no one will do it for you,” she said.

“I want to be that girl from Tempe who stands up, who gets involved – and gets other people involved. I like to think my work gets people involved. If people in the community don’t get involved, and don’t take ownership, it won’t work.”

Many residents of the greater Phoenix area are taking ownership of their roles in Slattery’s mix tape project. Ryan Avery is proud to be among the participants, both the first time in 2011 and this year’s sequel project. An avid music lover, Avery has in fact been involved in many mix tape exchanges over the years, but always goes into each new project with an open mind.

“For me, it’s more about making a mix for someone else than it is about me receiving one,” Avery said. “Even though I’ve gotten great mixes before that have really blown my mind, I really enjoy focusing on what music I use to make the mix.”

Once he knows the guidelines or prompts for the mix tape he is to make, he first compiles everything he can find that fits the guidelines, then begins to choose those tracks that make the final cut.

Then Avery’s real work can begin.

“I spend a lot of time working on a good flow,” he said. “I am an artist; I put a lot of effort into the album. I want the first listen to be a special experience. At least half of the time, they’ll listen to the album front to back, at least the first time. I don’t want it to sound like it was just set on shuffle – if possible, I want it to have a story.”

Steve Jansen originally hailed from the Tempe/Mesa area, but has moved to Texas. In 2011 when Slattery launched the first mix tape project, he noticed it on Facebook and joined from Houston.

“It was cool, because I kind of have a schizophrenic taste in music,” Jansen said. “It adds a variety to the mixes I make.”

Jansen has an ever-growing record collection, and chose to compile the mix tape he created the first time by playing records and dubbing the tracks on to a cassette tape. Jansen said he made sure a lot of local Arizona and Texas artists made their way into the mix he made.

Jansen has since met Slattery, and was impressed by her art and devotion to community-building.

“She’s very aware, very conscious of the community,” he said. “She has a gift for that. As an artist, sometimes you become reclusive in your studio or your home, but not with her. It’s not about her – she is just the conduit. I’m stoked she is doing this project again. It’s really neat; she is great at bringing worlds together, finding a common thread.”

Slattery said anyone interested in learning more about the mix tape project should visit the Facebook event page [here] to find all the necessary information. Participants have until 11:59 pm Arizona time on Friday, July 10 to contact Slattery and submit their address and word submissions to join the project.

“I think the best thing I gained from the project the first time was the knowledge I can be effective if I want to be,” Slattery said. “I have ideas, and they are good ideas, and I should do them. Maybe I was too timid before – I had no one else’s lead to follow. It gave me confidence to keep doing what I’m doing… There’s always a way. If we care that much about this, it will happen. And we will do something great.”