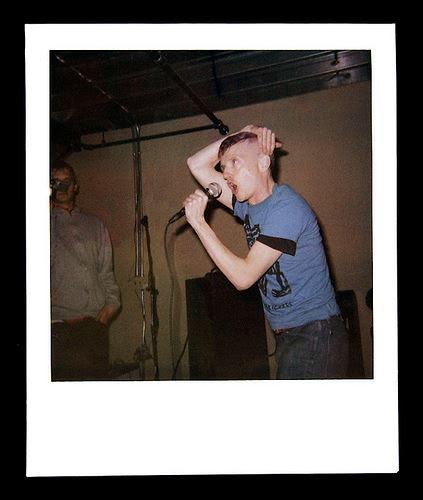 Cutting the wonderfully articulate Mullarkey, a person involved with Phoenix music on every level, from booking to recording, down to my one thousand word cap was quite difficult. Given his massive involvement with Phoenix’s music, and the endless number of interesting topics that stem from that, it was a near impossible task, so I didn’t do it. I cut it to 1700 words instead. What are you going to do, Yab Yum, sue me? You won’t, clearly, because you’ve already posted this interview. And you’re there reading this, and you’re going to read the rest of it, because you’ve already clicked on the link and loaded the page and Mullarkey is a damn interesting human.

Eric Gallagher for YabYum: So, you’ve gotta tell everybody who you are.

Mullarkey: Okay. My name is Mullarkey. All one word. I grew up in Norwalk, Connecticut. I’ve lived in Tampa, Austin, San Diego, and for a very long time, Tucson, Arizona. I moved to Phoenix in part because Tucson was going through a change and I was trying to figure some stuff out. I knew Phoenix– especially centered around The Trunk Space and Funny World– had a really good all-ages music scene so I wanted to come up here and see what I could contribute, and what Phoenix could do for me, too.

EG: Tucson was going through a change how?

Mullarkey: Um… Tucson had a very special situation where it had a downtown that was pretty much left to the creative class to take over and do what they wanted. Y’know, bands and artists. It was pretty special. At a certain point– I guess anything special is going to be co-opted at some point, and people with money started new bars with lots of large screen TVs and overpriced food, specifically on Congress Street, which used to have a very different feel. So that street is, I would say, a little more like Mill Avenue now. Definitely geared toward a college crowd. So that changed and a lot of all-ages venues were closing or struggling, so I just felt like it was getting harder and harder to get stuff done there, so that’s why I came up here. But I’ve definitely learned that every place has its unique challenges and nowhere is perfect. Phoenix has its own challenges because it’s a very large metropolitan area and it is very challenging to get people to drive sometimes twenty miles one way to see a bunch of awesome bands that they’ve never heard of. So, they might not know how awesome they are.

EG: It’s too spread out, yeah. So you came here for the all-ages venues and you ended up at The Trunk Space. How did you get involved there? Because you volunteer like crazy.

Mullarkey: I am a crazy volunteer. Y’know, I’ve been coming here for years; first as an attendee. Then I became friends with some really great people who I am still friends with like Ryan Avery from various bands like Fathers Day, and Jason from Hug of War. Ryan was the first one that booked me [at The Trunk Space], but we actually—my old band, Monster Pussy—we had to cancel because one of our bandmates had a death in the family. But then, Jason booked me a few months later. So my first show at Trunk Space was The Science and Technology Expo-Fest. January 2010. And I just kept coming up here to play. I definitely felt like Phoenix had a certain appreciation for weird, oddball stuff. Run-On Sunshine is the other project that I do, which has never been a rock band. It’s been a capella. It had a bandmate that played toy instruments. Currently, the most common form is with a cassette backing track of vintage synthesizers and percussion—actual drumming, that I do myself—and I kind of felt like that would work out up here.

EG: I know with Run-On Sunshine, we had talked a little bit about you sort of re-tooling the structure of the newer songs you’ve been doing. How is that going to effect the sound?

Mullarkey: Is that—like, the music theory?

EG: Yeah. The science-y aspect of it.

Mullarkey: Music is actually math, who knew? Because I’m a writer, that’s my background, I’m a storyteller, that’s really what I’m good at. And for years, I didn’t even play in a band because I didn’t even play an instrument like, “Well, I’m just a person with some lyrics and some melodies, who wants that?” But I did finally find people in Tucson. For years, I just had other people writing music for my words and melodies… I wanted to make my own music, but I didn’t know what I was doing for a while. So, I guess I hit the mark more than I missed it, but definitely some of the first songs I wrote on keyboard I listen to now like, ‘Yeah, some of those notes, if it was a half-step in the other direction it would have been in key and that would have sounded better.’ I mean, I guess some people would say I was truly avant-garde at that point in time, but I’ve been reading Music Theory for Dummies. I have the major scales down, so everything I’m writing now, I know exactly what key it’s in. I don’t pay attention to standard chord progressions, though. They’re not too useful to me.

Mullarkey: Because then if you stick to those, you accidentally end up re-writing a Tom Petty song, and then he calls you up, he’s like, ‘Hey, I like that song but you owe me some money.’ If you can keep it in key but just totally mess around with expectations still, which is what I try to do. I think once you know the rules, it’s easier to break them.

Mullarkey: Yeah, I think I can’t help being weird, really.

EG: The shows that you do as Run-On Sunshine, they’re very passionate shows. I feel like they’re very much from the heart. Where does that come from, that “heart” kind of feeling? What are you drawing on?

Mullarkey: It comes from a few things. First of all, in my heart of hearts I’m totally emo. Which would mean 80s bands like Rites of Spring, and 90s bands like Cap’n Jazz… I’m influenced by a lot of music that I actually don’t sound like. Most of the bands that I’m influenced by didn’t play, like, weird keyboards. Also, I’ve never been good at hiding my feelings and I long ago decided I’m just gonna be a fairly open-book of a person. I write from experience. Pretty much all of my stuff—I might fictionalize a few elements here and there—it’s basically all from my life. I’ve never been good at writing about characters. A lot of stuff I write tends to be grounded in a place with specific experiences. I feel I’m creating the imagery of the way a place looked and smelled when I was having this experience. Like, all the emotion will come flooding back, and then I’ll really feel it and that comes out in my live set, and then maybe other people will feel that emotion, too. Even if they weren’t hanging out on top of a parking garage in Tucson, Arizona watching the sunset with a nice person like I might have, something in there might be like, “Yeah, I relate to that in some way.”

EG: Why should people come see you perform?

Mullarkey: I try to make every show an event. I try to make every show a little different. Making every show different is a little hard because I’m using backing tracks a lot and that means a lot of times you’re hearing the same music every time. I do try to mix it up. Like, sometimes, I’ll have special guests like, Harrison Huffman and/or Andy Warpigs might play drums in a song. We don’t practice. They’re just geniuses so they can pick up anything. I sometimes will take an old song and do it a capella. At the very least, I’ll do songs in a different order. I don’t play out locally a lot, but when I do I am putting my full heart into it.

EG: What’s the next thing that you’re doing? Where are you gonna be? You’re going on tour!

Mullarkey: Yes, for eleven weeks, kicking it off on July 7th with a super lineup of local friends and a guy who plays as Miss Massive Snowflake who actually tours more than I do. Way more than I do. I also just put out a split tape with my friends from Tucson, Algae and Tentacles, and I am slowly adding up the songs for my next release which will be an autobiographical double-rock opera cassette release, so it should have about twenty-six to twenty-eight songs on it. By my next show, July 7th, I should have five songs ready to present.

EG: The split, what’s the name of it?

EG: Last question. You love cats. What’s the best type of cat? Do you have a favorite breed?

Mullarkey: I’m not an expert on breeds. I will say black cats have taken over my life. I took care of a black cat for one year named Chewi Cham Chan, which is Japanese for “fragile little one”. Then another black cat in Tucson when I was living there just moved in, hung out for a year and then he vanished. Now there’s another black cat just hanging out at my house. Just walks in. We cuddle. I feed him. I’m also very fond of orange tabbies. I have a song about one such cat named Tina, which was a boy cat. So yeah, those are probably my two favorites, but, gotta give a shoutout to Siamese.

EG: Cuddly cats or like, the cats that hate you?

Mullarkey: I respect the cats who hate me. I respect all cats. The only bummer is when a cat is mean to a cat I care about, and then my emotions get really screwed up. ‘Cuz like, I know the cat is just being a cat but he’s being mean to this other cat… that’s hard.

Mullarkey: They are. Cute jerks.

Go see Mullarkey kick off his tour as Run-On Sunshine on July 7th at The Trunk Space, and download his split tape with Algae and Tentacles, now available on an internet right here.