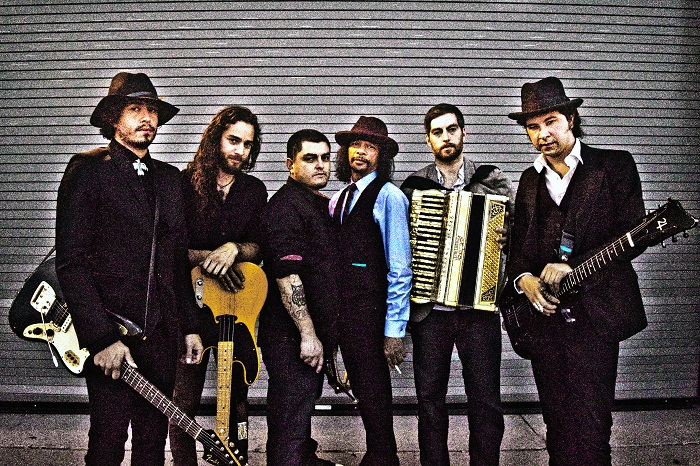 Maybe you haven’t yet heard of chicha music? Maybe you’ve never even swayed to the rhythm of cumbia? If you fall into either of these groups, I have an amazing suggestion for you: Chicha Dust, a Tucson band who puts a psychedelic spin on Peruvian cumbia, also known as chicha.

I caught Chicha Dust live at Phoenix’s newest venue, Valley Bar, last Friday and had a chance to chat with Gabriel Sullivan who shares guitar and vocal duties for the band with Brian Lopez. Geoff Hidalgo (bass), Jason Urman (farfisa/accordion), Efren Cruz Chavez (timbales/percussion), and Winston Watson (drums) complete the Chicha Dust outfit. The band will be taking a break from performing to start recording their first studio album.

Rosie Magana for YabYum: I love the name Chicha Dust. These two words say it all. It’s Chicha wrapped in a thick delicious coating of your own influence, hailing from the desert of Tucson. What desert plant would you say best represents Chicha Dust and why?

Gabriel Sullivan: Hmmm plant huh? I guess we’d be them dead mesquite trees . .. dark and reaching and somehow psychedelic . .. and we photograph well in black and white.

RM: Chicha is merely a strange word to too many Phoenicians. I myself had no idea there was this specific style of cumbia from Peru named after a famed Peruvian fermented drink. Once I did, I had to learn more. If you were to select one album as the perfect example to understand the beauty of Chicha which would it be and why?

GS: It would absolutely be the Roots of Chicha compilation released by Olivier Conan over at Barbes Records. This was the album that turned all of us onto this music. You can study that album a million times over and always find new moments in the music that pull you in.

RM: Though chicha is the soul of your music, hard rock is its spirit, one that moves the cumbia to a nuanced rhythm all its own. It seems to be greatly different from the music both you and Brian were creating individually. What inspired you to combine forces and give birth to a band with a chicha-rooted rock sound?

GS: Brian and I returned from a two month European tour at the end of 2011 and had been tossing around the idea of starting a band together that could play parties, restaurants, private gigs… essentially a band to make money with and keep us from having to get day jobs. Playing chicha was our first thought as we were completely obsessed with the music and wanted to learn all the guitar riffs we could in that style. We started playing in small bars and even for Brian’s grandmother’s 92nd birthday party. Within a few months the band was drawing good sized crowds and playing larger clubs. The rock’n roll element came completely naturally as that is the music Brian and I grew up playing…. and it seems to just be getting more rockin as we go. You oughta see our arena rock stage set up these days. We even have a gong.

RM: Your album, ¡Live at the Dust Ballroom!, was performed in a jam-packed warehouse in Tucson. It must have been amazing to see all these people ignore the 100+ degrees they were dancing in because they were entranced by your music. Do you plan to have your next album done in a similar setting, live with tons of excited fans?

GS: That was a very special record to make… done with only two days planning with just our family and friends. It perfectly represents the core of what our band is. The next record is going to be quite the opposite from that production-wise. We opened our own recording studio last year (Dust & Stone Recording Studio) and have been working furiously on about 16 original songs. I think it’s safe to say that this album will be the fullest expression of our vision for the band. . .. Brian and I are currently working 8 to 12 hours a day on overdubs and mixing. It’s going to be a very special album.

RM: Do you know when we can expect this next album? 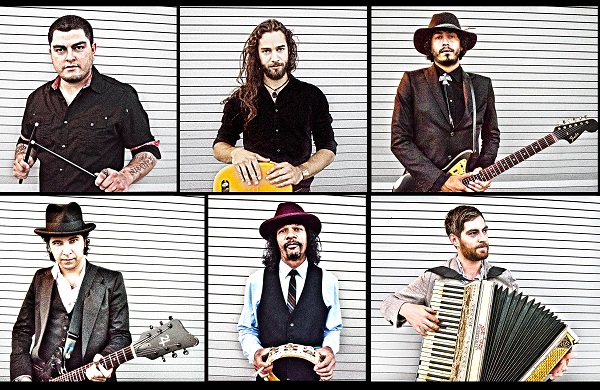 GS: We have some very exciting stuff in the works concerning the release of the record. Nothing we can leak out now, but you can expect the new studio album early 2016.

RM: You have created such a unique sound with this band. Do you have any plans to tweak Chicha Dust’s sound stylistically in anyway?

GS: Our band certainly has our roots in Chicha and Cumbia music but we are constantly expanding and incorporating so many other styles of music. The musicians in this band are the best I have ever played with. Everyone in the band can play multiple instruments and can play any style of music. The Chicha Dust sonic landscape is certainly wide’n vast. We could land anywhere at anytime.

RM: When I found out that you and Brian had come together and formed this band it made so much sense to me because I think you are some of the best talent in the state. I know it sounds corny, but it’s true. Is there anyone that you would like to have collaborate with Chicha Dust in the future?

GS: Thanks for them kind words. Brian and I have toured so much together that it was only natural that we started a project together. I mean, we’ve been so fortunate already in the sense of collaborations. We got to sit in with Chicha Libre in France, half of our band backed Howe Gelb for a song on the last Giant Sand record, not to mention our Tucson favorites: Vox Urbana, Logan Dirtyverbs Phillips, and Sergio Mendoza. But I think what we’d all love is to jam with Bjork. Bjork, are you listening??

RM: One of my favorite things about the desert is the surreal experience of the monsoons. I like to listen to Leonard Cohen during a monsoon, I feel his deep voice sets the tone and slows the moment down so it seems less ephemeral. What would you listen to during a monsoon storm?

GS: Oh it doesn’t get much better than ol’ Leonard. Did you hear his new album? That song “Slow”. Wow. Now that you mention it, I think I’ll turn on Marc Ribot’s Cuban record for this year’s first monsoon. Some of the best guitar playing and guitar tone ever put to tape.

The magic of the monsoon is what I felt watching Chicha perform live. They are not a band to be missed. It is a psychedelic cumbia dream to be enjoyed by all. You can follow Chicha Dust on Facebook and Bandcamp for more information.