“I thought it was gonna be loud? I told the sound guy ‘we’re gonna be loud’” says Chelsea Dagger, lead singer of the dance-punk trio Mrs. Howl. “He was like ‘I hope so!’. And I said ‘No really, we’re gonna be loud!’” Just moments ago, the all-girl band stepped off the stage at Third Space from their very first high-energy performance in the Valley of the Sun. The recent transplants from Seattle graciously sat down with me for a brief Q&A to talk about who they are and the sound they’ve brought with them.

Christian Wilder: Welcome to Phoenix! How was your first show tonight?

Laurel Portié: I think it’s great! Especially coming from Seattle where everyone kinda folds their hands and just bobs their heads. But here, having people dance and be involved in the show was really awesome! And it gets us in the mood, too! Like if people are up front dancing, then I’m gonna jump down and dance with them!

CW: I know right?! I was thinking to myself that you’re a total showman coming down offstage and dancing with the crowd while playing guitar two songs into your set. I wasn’t expecting that.

Chelsea Dagger: “It was really cool! People here like to dance! It was awesome!”

CW: Tell us about how Mrs. Howl formed and where the name came from.

LP: I met Chelsea in Dallas and we started dating, but then I got a job in San Antonio. And then I had a music meeting with a guy from Craigslist. He was gonna be a drummer and I was going to play guitar and sing, and we were gonna be a two-piece like Matt & Kim. We had gone over some songs a few times and jammed together. Then I thought ‘let’s bring in Chelsea to sing’, because I had heard her sing before and her mother’s a singer.

So Chelsea came to practice with him and I the second time, and [as] she sang and we were thinking ‘Oh yeah, we’re gonna do a Yeah Yeah Yeah’s style band.’ She would sing and I could do my thing on guitar and he would drum. That’s how Mrs. Howl formed. Back in Dallas I had filled in on drums for a band called Lovie, who got their name from Lovey Howell of Gilligan’s Island. The singer and I were really close and she was like a big sister in a way, so as a tribute to her we would name our band Mrs. Howl.

CW: So other than Yeah Yeah Yeah’s, do you have any other immediate influences?

CD: I think that’s such a funny question because we never listen to something and be like ‘Oh we wanna sound like that. It just comes out how we sound. People in Seattle kept telling us ‘you must like Bratmobile’, and I’ve actually never heard them (laughs).

LP: Marco Collins, a famous DJ from The End 107.9 first heard us and was like “Sleater Kinney”. And fans at our shows were coming up to us saying ‘Marco Collins LOVES you guys!’. And we were just like ‘What?!’ So for this DJ, who was the first to play bands like Nirvana, Garbage, Elastica…major bands that were a heavy influence to us, compare us to Sleater Kinney… that was huge for us. 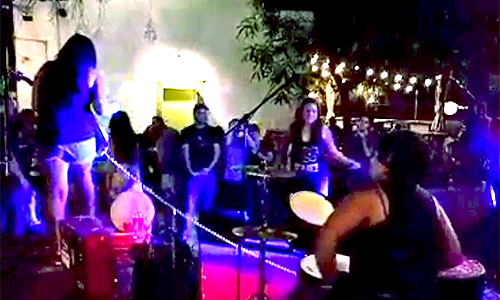 CW: Have you rubbed shoulders with any celebs in your travels?

LP: “Kathleen Hanna. We had gone to see The Julie Ruin when we first moved to Seattle and were standing in the front row. She had left her set list, which had her name on it and some lyrics that she was trying to learn. So after the show I had grabbed all of that, and then Chelsea and I went to Neumo’s for a drink. We get there and Chelsea says “Look, Kathleen Hanna’s standing right over there. Let’s go talk to Kathleen Hanna!” We walked over and I couldn’t think of anything to say. And Chelsea’s like “Say ‘hi, Kathleen Hanna’.” And so she put her arm around me and we took a picture and I was like ‘Oh shit!’ But when you look at the picture you can tell that I’m just the giddiest person ever. She was so awesome.

CW: San Antonio has been good to you, from loyal fans, to a killer music scene, to Nina Diaz producing your debut record. Do you have any favorite moments?

CD: OMG, when we opened for Girl In A Coma at The Korova! That was the most people we had played to, like 800 people. I had never been in a band before and we were kinda new, so it was a little bit overwhelming. But I took a picture of all these people from the stage…it was great. We would also throw our own parties because we were friends with all the bars and venues. We would make the bill and book bands that were really fun that we wanted to play with for that night.

LP: We had a fan appreciation party at Martini Ranch for our 1 year anniversary, and I cooked eight pots of jambalaya! We worked a deal with Lone Star Beer and the owner of the venue to give free beer from 8-9. And the owner actually made more money because people were drinking other drinks from the bar and only one free beer! And so many people came out for the show because our fans are loyal…the place was packed!

CW: You ladies were short a drummer upon moving to Phoenix but held auditions. How did you come to choose Angela [Garcia] over the others?

CD: She was a bad ass! (laughs) And she was wearing a FEA shirt, which is made up of members from Girl In A Coma, so that was a thumbs up! We met her at a Piñata Protest show, which is our friends who always stay with us whenever they go on tour. They were playing a show in Phoenix and asked if they could crash at our new place. We had mentioned to them that we were looking for a new drummer, and Alvaro the lead singer said ‘Cool, I’ll post a photo on the event page.” And we received 3-4 emails from it and Angela was one of them. So we met her at the show that night and were like “Yeah, we want her (laughs), and we didn’t even know if she can play drums yet!”

Angela Garcia: Yeah, I had seen the post on the event page early and was like ‘What does this have to do with the show? Are they needing a drummer to fill in for their show?’. So I read more into it and what struck me about it is that I have my career as an audio engineer, and they had posted that they were also career oriented people who also love to play music. And I was like “hell yeah”. So we met at the show on Thursday. Friday they were like ‘these are the songs you should learn’, and Saturday I played them.

CD: (laughing) And when I met Angela, she was all quiet ‘n stuff and I was like, ‘Is she gonna be able to play fast dance music?’ Then she came in and nailed it!

CW: Angela and Laurel, both of you play multiple instruments. Is this new dynamic stirring the creative pot for future Mrs. Howl material?

LP: I think so. One of the things we practiced last time was an Arctic Monkey’s cover, and Angela was like ‘oh shit, you’re playing this backwards!’ And I was like ‘oh shit, you’re right!’ And it was really cool to have someone else in the band know what I was doing because predominantly on previous albums, I wrote the lyrics, the melodies, and the drum parts. And it was cool to have someone else who knows that stuff, so the pressure’s not completely on me. I like to do EP’s every 3-4 months to keep people interested in new music, and I have a feeling the next one is gonna be one of the best we’ve released to date. It’s only gonna get better from here.

CW: What should people expect at a Mrs. Howl show?

AG: “You can definitely expect lots of energy, dancing, and dance-punk partying! At the end of the day we just want people to know if they go to a Mrs. Howl show, they can expect more than just a band that plays music. Our first priority is to make sure everyone has a good time and that they walk away and say ‘Damn, they’re a good band but FUCK THEY ARE FUN!’

CD: We will play anywhere people want us to, as long as there’s a PA.

For more info on Mrs. Howl, check them out on Facebook, YouTube and Bandcamp. You can also watch Mrs. Howl performing live from their Third Space show below (video shot by Esther Garcia).

Tonight was almost too much fun ;p thank you all who came to enjoy the bands who performed and for staying until the end of the night with us, and dancing! holy crap, you can move! Your support means everything, and keeps me going! Here’s to more practice so I can play more songs and keep the party going even longer next time! <3