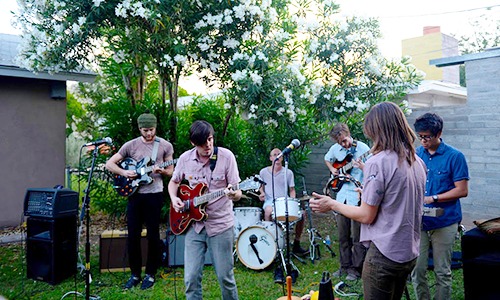 This quote from Saturday’s main organizer of debauchery, A Claire Slattery, perfectly sums up what was an exciting evening of community support and indulgence.

Situated just west of Arizona State’s main Tempe campus, the Maple Ash (Farmer Wilson) neighborhood remains a small, locally-minded, grassroots enclave in the midst of a rapidly-developing hub of corporate interests and brand names. The event, MAFW Presents: A Night of Music, Bikes, & Beer, was a culmination of ideas and themes regularly circulated within the neighborhood’s active social media accounts and promised to deliver a free night of epic exploration, live local music, and a chance for “neighbs” and friends alike to meet and enjoy the local surroundings. 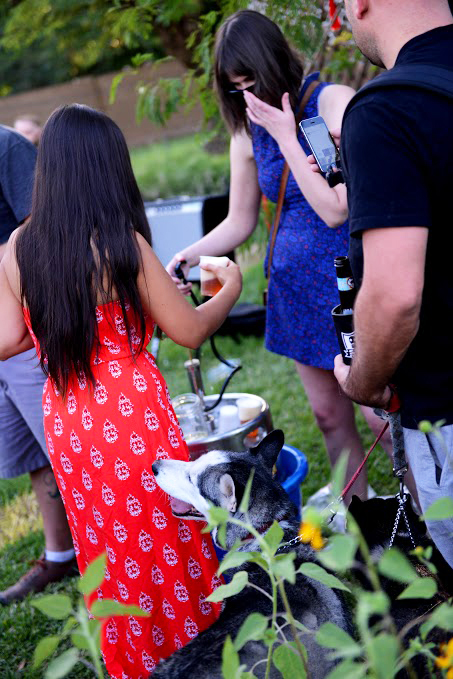 The May 2nd event seemed to spring up in response to the ever-growing police presence in the MAFW neighborhood, a growing cause for concern as of late. In an attempt to avoid yet another shutdown of live music in the area, the event featured 5 separate house venues that were announced only as the show was to move on to the next location. Attendees made their way via foot and bike from show to show which only added another element of excitement throughout the evening’s festivities. Characteristically, Tempe PD made their presence known from time to time over the course of the night, but all around did not interfere as much as they could have or probably would have liked to.

Overall, event promoters championed the night as a huge success for the neighborhood and local community. Tempe businesses such as Four Peaks Brewing and Spinelli’s Pizzeria donated support in the form of refreshments and collectives like Tempe Bicycle Action Group handed out free bike lights and encouraged safe riding practices. Promoters of Tempe’s South by South Roosevelt Music Festival as well as local bands and musicians provided high energy sound and entertainment while neighborhood organizers guaranteed everyone stayed safe and enjoyed themselves.

The event undoubtedly brought the neighborhood closer together and strengthened MAFW’s resolve to continue standing out and making a difference in the local community. 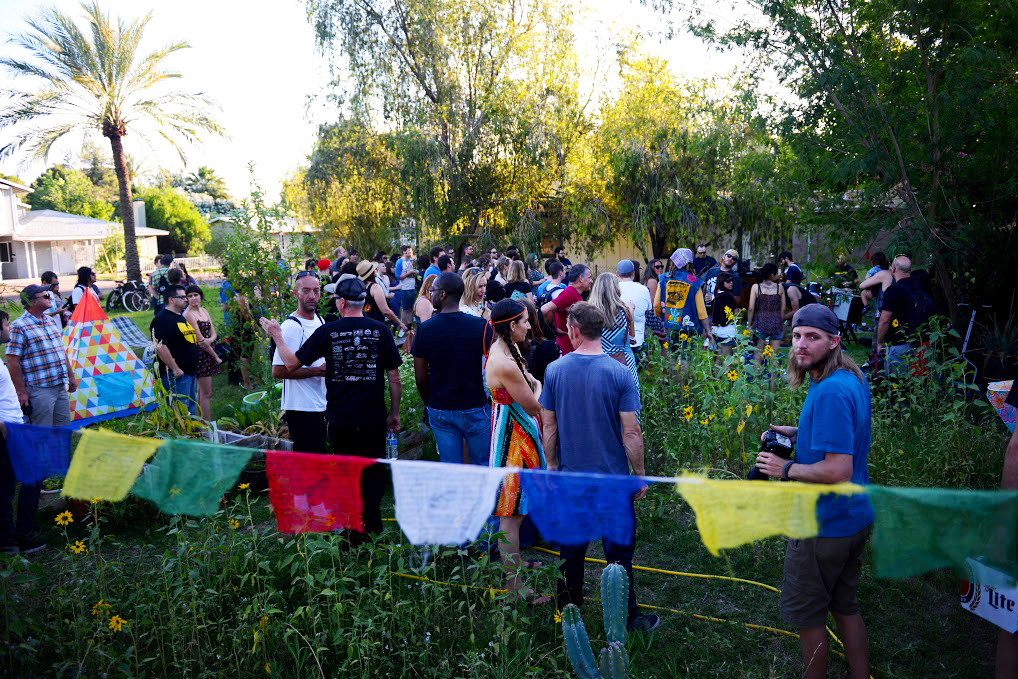 Crowds gather at house #1 to get the night started 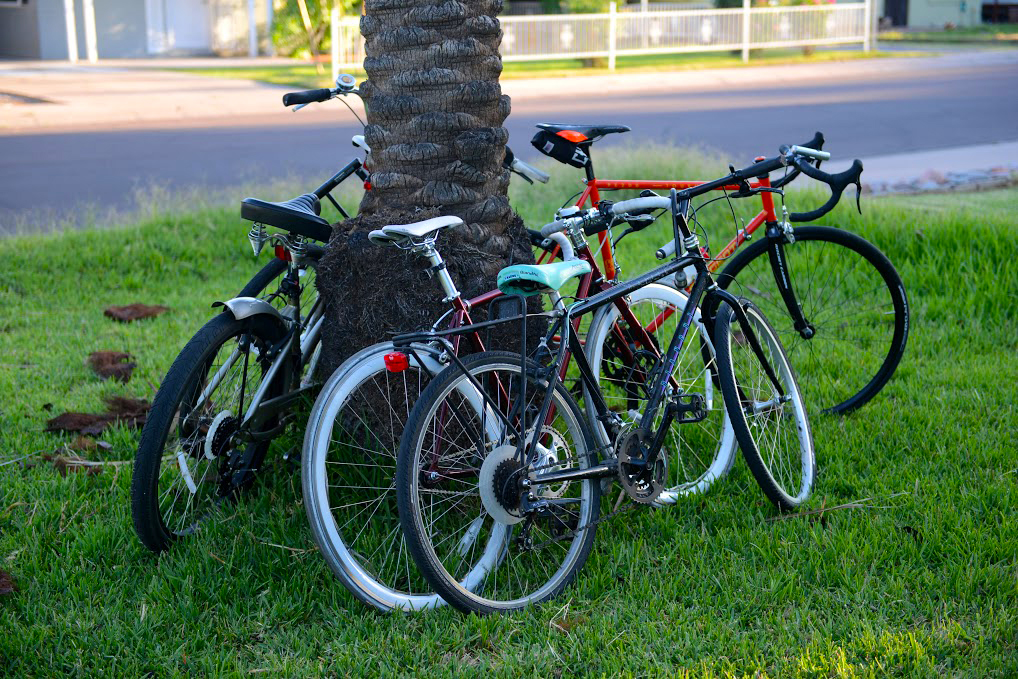 Bikes were the transportation of choice for most 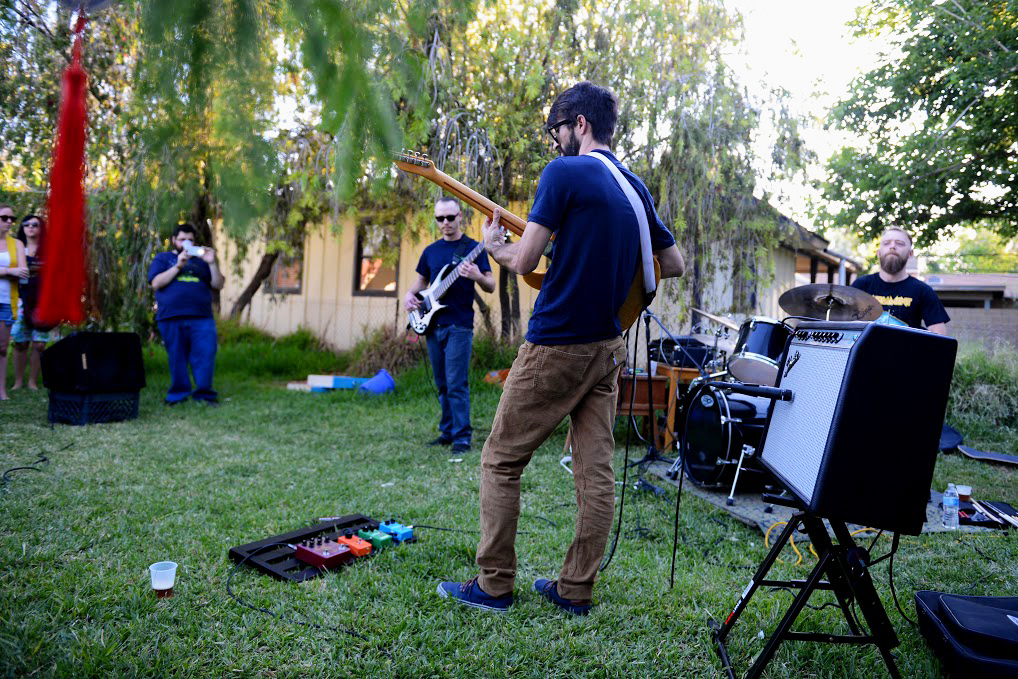 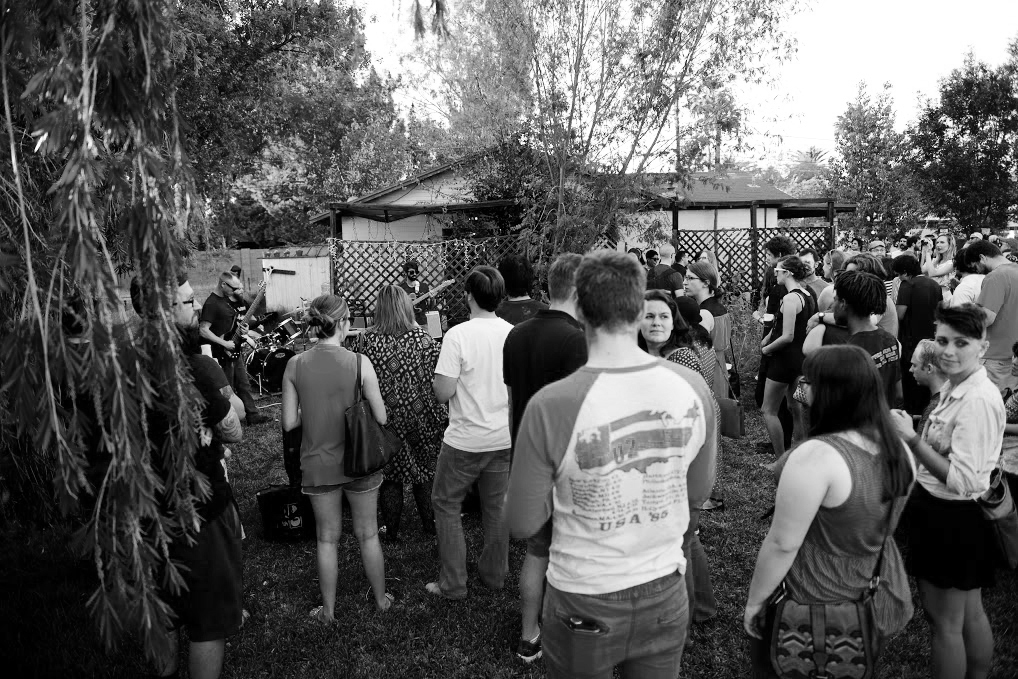 By the end of house show #1, people were showing up in force 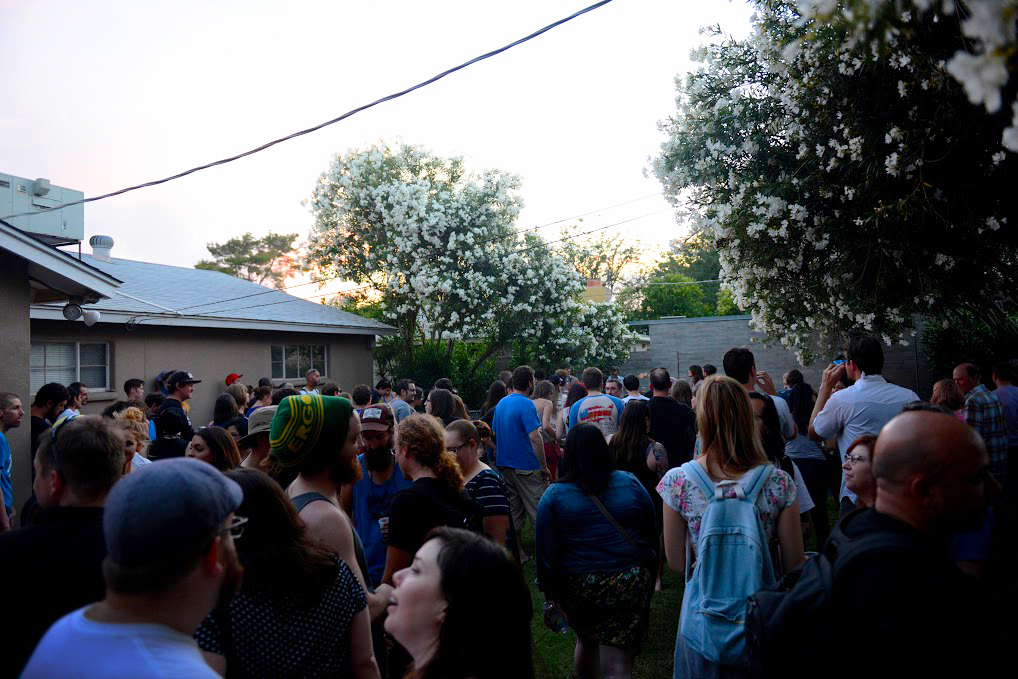 Attendees enjoying the sunset near the end of show #2 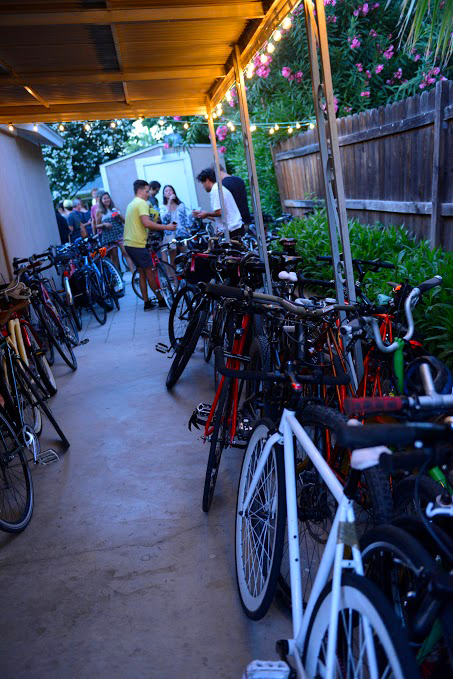 Bike parking was in high demand all night 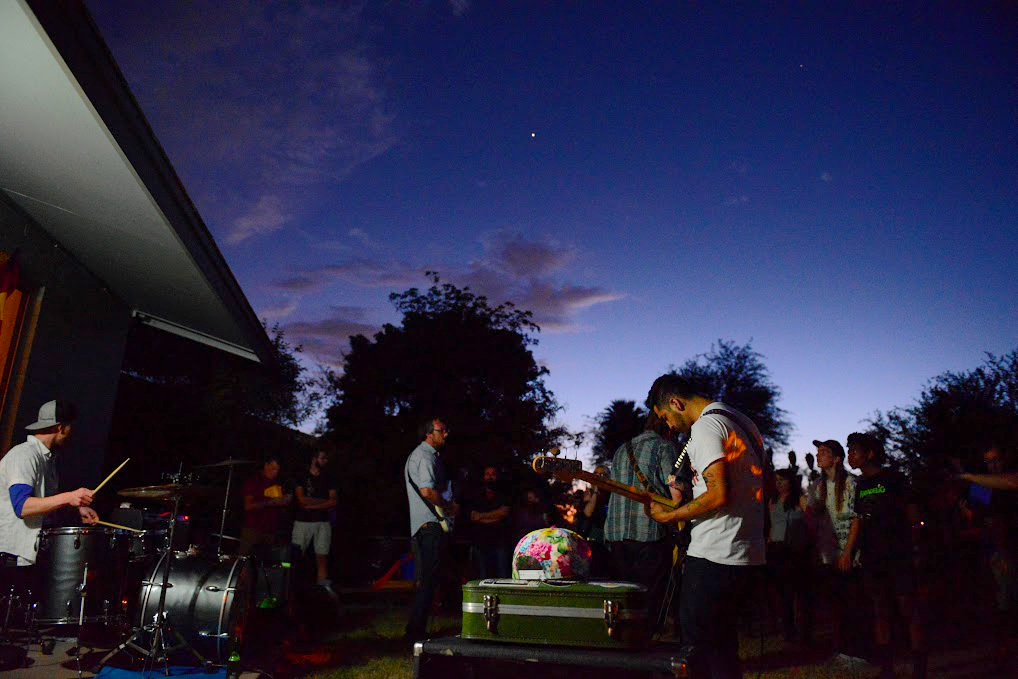 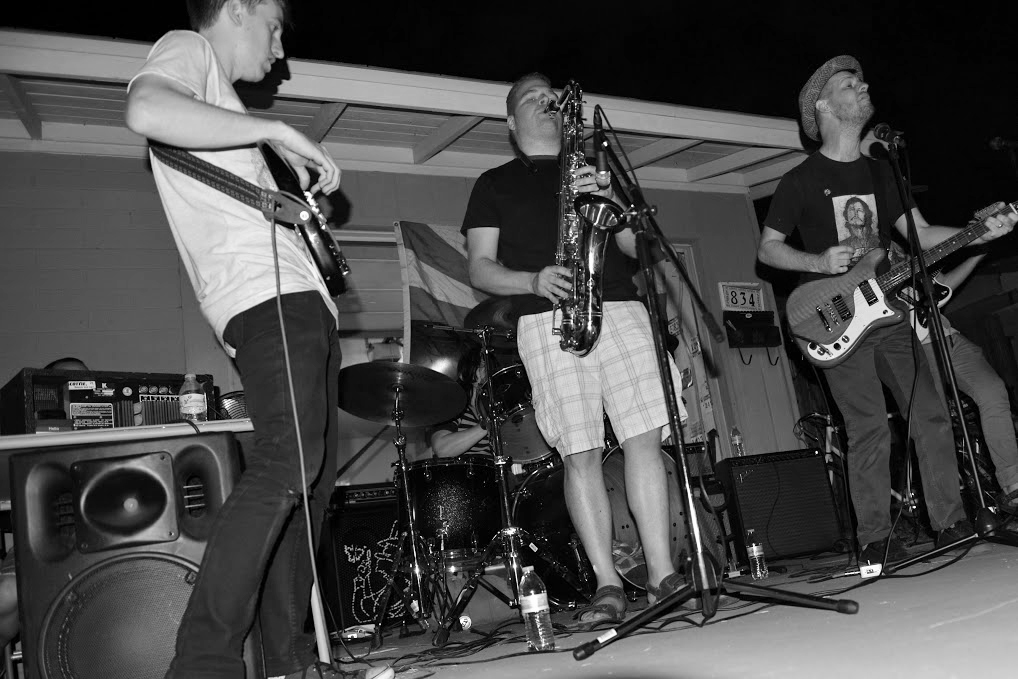 Liam and the Ladies delivered an energetic set at house #4 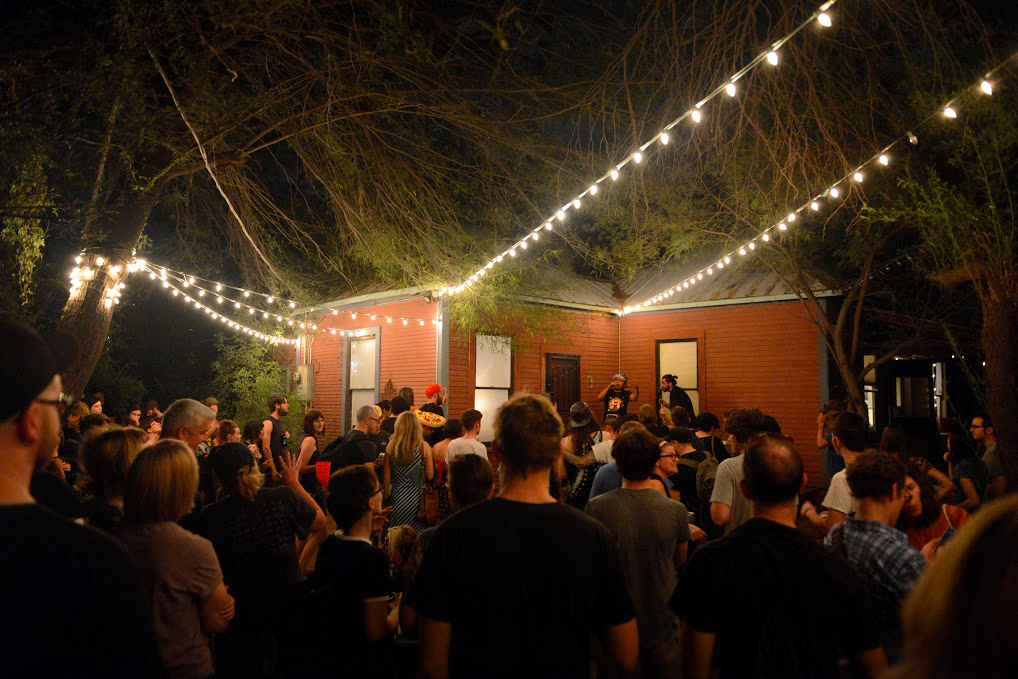