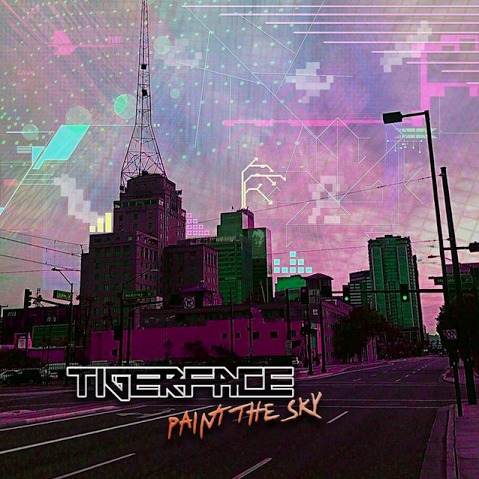 The last time we heard from Tigerface, the boys were playing in and around town supporting their EP, Out of the Dark, which was, by the by, terrific. I had a chance to see them live and there was nothing I could do to not dance, (and, dancing is something I do not do, unless I’m recreating the “Risky Business” dance scene in the privacy of my living room).

“We were always most concerned with putting out the best music we possibly could,” Ari Epstein (vocals/keyboards and synth), says. Epstein, along with Chris Fuhrer (drums), Alex Cordoso (bass), and Matt Willers (guitar) who comprise Tigerface, have taken to their dance, indie, and hardcore roots to create a terrific piece of work. In fact, it’s nearly impossible not to get hooked in by each and every one of the hooks each and every song has to offer.

When I say that I’m completely surprised by the new record it is not a slight – it’s a compliment. The recording of Paint the Sky is near perfect – not a understatement considering the band self-recorded and produced.

“As musicians we always wanted to do something different”, said Epstein while commenting on the over saturation of similar sounding artists in recent years.

And you know what? I agree. Again, that’s not a slight on any other act. Inspiration and influences are nearly impossible to ignore when it comes to music, art, poetry, et al, but I’m pleased to report that Tigerface has taken those influences and created something that is original, and quite frankly, needed here in Phoenix, especially when it comes to this genre.

A wall of fricken danceable sound that will enter your ears and bounce around in your head.

Besides the insanely hook-y, anthemic tracks, Epstein’s vocals are superb. And there’s that wonderful distorted guitar that adds just enough grit to get your attention.

If Plain White Ts threw a dance party but were happily medicated.

Earlier this week I was asked to answer a couple of questions regarding, “How a band can effectively reach out to blog.” Well, I wish I had the press release, bio, and intro letter that I received from Tigerface. I would have copied/pasted it into the email I sent along with me response. Their email was professional, thoughtful, humble and organized with no bullshit. If any band needs any tips on this subject talk to Tigerface at one of their shows.

Also, the 1:09 track is my favorite. Came out of nowhere, and it’s pretty damn perfect.

That moment when you want to dance like no one’s watching.

Get a sneak peak of one of the tracks from Paint the Sky for yourself here. The rest of the album will be available on May 5th. Get your pre-order in!