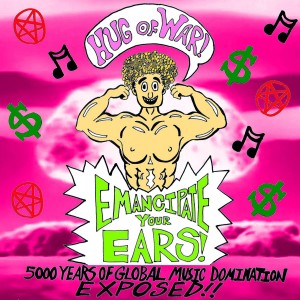 “One of the best pieces of advice I got from a book was from Role Models by John Waters. He advised the reader to go to thrift stores and seasonal Halloween stores the day after Halloween when everything’s on sale, and pick out a uniform of defiance. These words of wisdom have served me well!” So states Jason Kron, aka Hug of War, when asked about his impeccable style sense and wardrobe. However, I feel this”uniform” can be applied to his songs as well: one-of-a-kind, left of the norm hip-hop/dance tracks. Opening with “I Need Music”, Jason throws down on the subject that saved his life and what “we must do to save its life.” Using Garageband and Logic, Kron goes “for a specific kind of cheesy sound” but the effect works well. Kron creates old-school sounding jams you can’t help but bob your head to. “Down With Parents” may seem like a tongue-in-cheek rant on first listen but peek a little a closer and you will see that it’s a serious statement on not forcing your children to conform to ideas and mindsets already ingrained in your misguided head. “Between mommy and media, of course Pee-Wee’s a deviant/Could be brilliant, but you prefer obedient/DOWN WITH PARENTS!” An ode to the one-and-only Space Alien Donald (with whom Hug of War has shared a mutual musical affinity), is featured on “My Best Friend From Outer Space.” If you’re unfamiliar with Space Alien Donald, Jason breaks it down for you: “I am a space alien, I rap about robots and cocks/Question everything, and don’t forget to sing/It’s not enough to think outside the box.” Boy, we are going to miss Donald, who recently passed, as well. On “Treat Me Sweetly Until We Die” Hug of War tells the story of Bruce and how, unfortunately,  his life is not going very well. Fortunately, however, “Love makes it alright,” even if you have to love someone from afar, without reciprocity. Hug of War states that: “Though this may seem like yet another harmless album for mindless consumption, it contains subliminal instructions on how to break down the mental barriers set up by those in power. With the help of these righteous anthems, you will reach your full potential and achieve all of your dreams.” And you know something, I believe him. My biggest complaint is that I wish there was more! Listen to Emancipate Your Ears! here. 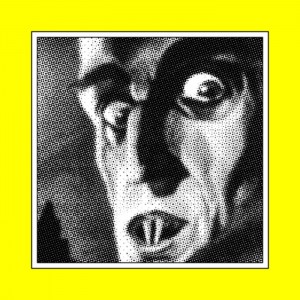 One of the first releases on Rubber Brother Records this year was Business by Kendall Humbert, aka Local Wizards, and it is definitely an album you want to check out. After surviving on singles for a couple years, Business is a welcome feast to say the least. It’s just so good. Minimalist, sample-based “chipfolk glitch,” 98% of the samples are instruments Kendall played himself. Using Logic, Humbert samples himself playing something once and then loops it “forever and ever.” The effect is ear-catching, for sure. Kendall has a genuine ability to write interesting, melodic vocal lines to accompany the glitch as well, contrasting the two to great effect. “Riches” opens the album with synthesized, a capella harmonies that lead right into heavy bass and airy drums. It’s one of my favorites on the album and sets Business off right. “Thorns”, another favorite, was one of the aforementioned singles and I’m glad to see it get placed on the album. Featuring some beautifully sampled piano, Kendall begs the question, “Do you want to be my friend?” “Franzia” brings the tempo down a bit before “Thorns, Pt. 2” picks it back up with its bell-pattern drum beat and “outdoor concert” guitar solo. At least that’s what I feel when I hear it. “Matthew McConaughey” is my personal favorite on the album. “They say a lot about the modern generation/ A lot of plastic kids in a plastic life…I hear a lot about the international way of things/ but I can’t seem to find myself across state lines.” The track builds and builds before ending with harmonious keys and then a sample from 3:23 onward that you just have to hear for yourself (“Guys bein’ dudes”). “Milk” is another single I’m glad to see made Business. Humbert’s ability to write a drumbeat is staggering, something I first noticed with his 2012 release, The Signal. He stated that he has “a kind of hip-hop way to go about making indie music, assuming that doesn’t sound stupid.” No sir, it doesn’t. “What U Did,” “Let’s Go Out,” and “Itadakimasu” close out the album and, while I enjoy the songs immensely, the “glitch” effect on the music becomes a little more than my ears can handle. They must be deteriorating at a rapidly accelerated rate. Listen to Business here.

It Was Only You

Sean Magruder, aka Emeralds, makes instrumental, experimental music on the chill end of the aural spectrum. Released last October, It Was Only You definitely made me stop and check out everything he was laying down. Opening with “YouInReverse”, the chord structure and tone remind me of Angelo Badalamenti and a lost track from Twin Peaks. Great place to start. Electric guitar provides the main melody on the second song “SeasonsOver.” Although Sean uses Pro Tools to create his sounds and “almost all of my music,” he again incorporates his electric guitar on the third track, “WhatCanIDoToMakeYouUnderstand”, with great success. I believe it to be a good thing when stating he would like to implement his guitar more. After the sample-centered “Attention/Affection” and the piano-lead “Interlude” (which sounds like the ending-theme to a retro television program – despite the modern hi-hat), the album closes with “EyesLikeEmeralds”. Part crypt, Lynch, and synth, “EyesLikeEmeralds” encapsulates the entire Emeralds sound and is a favorite from It Was Only You. Give the album a listen on Bandcamp here. For some newer tracks check out the Emeralds SoundCloud page. Rumor has it a new album is due out soon!