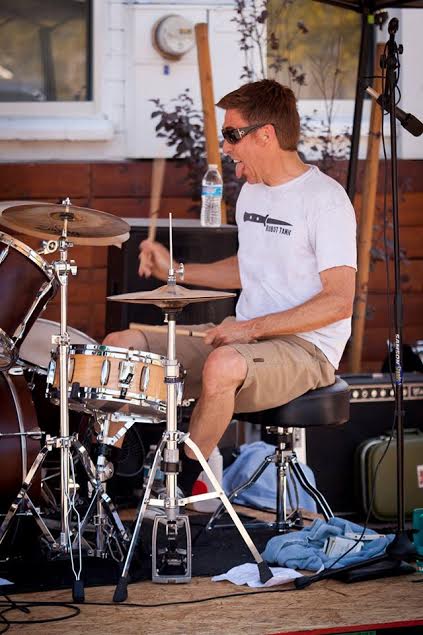 Father Figures’ drummer Bobby Lerma has a tendency to leave people in awe. His stick flurry often results in heads shaking and jaws dropping. Be it lightning speed or moving within a slower, melodic groove, this veteran of the Valley music scene is so simultaneously astute and ferocious that it’s completely captivating. On top of all that, he’s a truly great person with a sense of humor so quick and sharp that it rivals his snare cracks. I caught up with him to talk about the Father Figures – the locally based and much beloved post-punk band he formed with Michael Cornelius and Tom Reardon – and to hear more about his history and current happenings. Check out the video at the end for a couple signature Lerma moves.

When did you first notice the drums? Not necessarily for playing, but just noticed their existence?

You know, I don’t know why it happened but in about 3rd or 4th grade I just wanted to play the drums. At my school, however, you couldn’t play the drums until 5th grade.

So did you play something else instead?

I played the clarinet. When I was able, I played the snare and the teacher said I had some promise and he told my mom the same. However, I quit playing drums in school because I didn’t want to just hit a snare. I wanted to play a whole drum kit and those weren’t available to the kids at my grade level. When I was 12, we did a talent show at Sunnyslope Grade School – we were KISS and I was Peter Criss – I asked my mom for a drum set. It was big deal because we were really poor but somehow she pulled it off and got me one and it just came really naturally – I was able to just play it.

You hadn’t played a full kit before?

No. I’m just one of those lucky people that just have a beat in them. Around that time, 1981 or ’82, Neill Hounchell (Owner of ThirdSpace venue) had a band called Soylent Green that I’d go watch practice. I told those guys I wanted to be a drummer and Neill and Bam Bam (longtime local drummer) would give me little helpful pointers but that’s the closest thing I’ve had to a drum lesson. Then when I was a freshman in high school, I started my first band.

What was that band called?

That was The Joke with Shelton Valentine (currently in Dirty Hairy) on bass and some other friends and that was kind of the whole beginning of it for me. There was never really any big epiphany for me; it just always felt right, like doing what I was supposed to be doing.

How many bands have you been in between The Joke and Father Figures?

From The Joke, I joined Kluged with two guys that I knew from the punk rock scene that were attending DeVry University. They both had a lot of experience. I was about 14 or 15 so that was a little intimidating, going and playing shows with these guys who were older than me.

Full on noisy hardcore punk rock thrash. Kluged was a little more melodic, they really knew what they were doing and playing with them, I grew by leaps and bounds.

You got into punk rock at a pretty early age.

Yeah, I was really lucky to have an older brother who was in the scene that took me to shows. After several years, I got tired of the whole scene. It started getting violent and it seemed like you had to have a uniform to fit in. When I first got into it, I liked that it was a place where all different types of people could fit in. That’s when I started to play music with Scott Carson and Ron Cummings, doing a whole darkwave Britpop type of thing. From there I moved to Tucson and was playing music with some guys for awhile until I was in a car accident and started planning a move back to Phoenix. I got contacted by Todd Joseph (another longtime musician, currently in the Smoke Bombs) when his band Sticky Thang needed to fill the spot left by Al Penzone. I thought, “No way, I’m not good enough for that,” but I went and tried out and they told me that I was in. That’s where I really learned how music was put together. I got a passion for arranging and seeing how music weaves its way together and how it can evoke emotion and just drag you along – – and seeing how drums could be part of it. That was a really important stage in where I was heading with the drums. I played with Sticky Thang for just a bit; a couple of the guys moved to Seattle and Todd and I stayed behind.

After that I joined the Voice and I played in that band for years and years and after that, I played with Jeff Dahl but I had to quit because he was going to Europe to tour and I was just finishing up my biology degree and I had a month and half of school left. I was doing a lot of research at that time so I couldn’t leave. Bam Bam ended up going with Jeff.

I would have liked to have gone but I had already put all my eggs in the music basket. I’d gone to college and dropped out to do music, so this time I was back in school to finish and much more focused. I had a professor who took me under his wing, took me on trips to do research, and allowed me to co-publish with him. I got to speak at some great meetings. It was a really great experience.

I didn’t know you had a degree in biology. What was your area of focus?

Evolutionary biology – mainly plants and insects and the evolution of food webs and how food webs are structured. Whether predators influence prey populations or vice versa. Plants and insects are great little microcosms to observe for that course of study.
So then I was in Grant and the Geezers for a couple years and from there I may have taken a year or two off. Then I did a band with one of my best friends called 40 Watt Las Vegas. It was mainly an excuse for us to get together and get our creative energies out. We weren’t really about playing out and recording or anything. And then came the Father Figures… 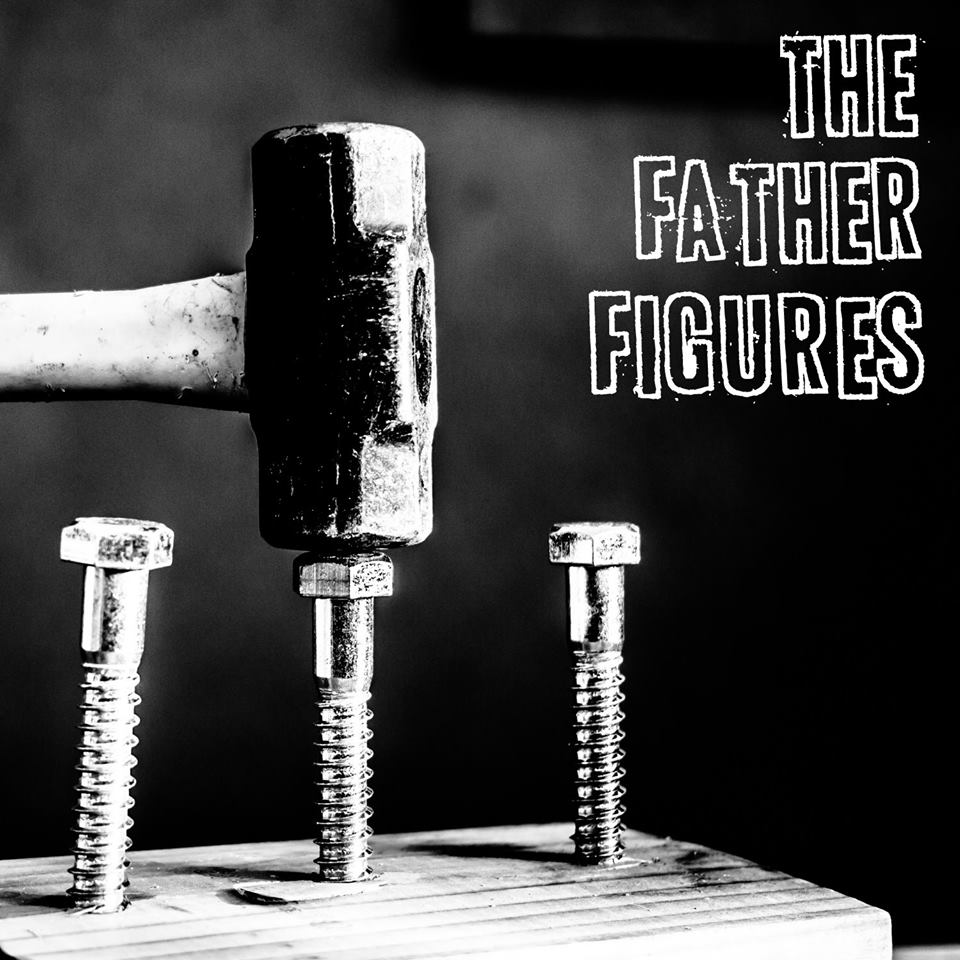 Let’s hear how that got started.

I had posted a song by Cut Off Your Hands online and Tom (Reardon) commented that we could do something better than that. Years before this, Tom had asked me to come play with Pinky Tuscadero’s WKAF and I did but I failed miserably (laughs). I just don’t have the stoner rock gene. It was a really humbling experience. So anyhow, when my wife and daughter went out of town that summer, we decided to get together and then started thinking about who to ask to come play guitar. I’d gotten together with Michael (Cornelius) several times just to play and hang out, so I said we should ask Michael. We all got together and started playing. There were no defined plans. Michael suggested we play a few songs at his 50th birthday party, so we did. People seemed to like it so we were like, “I guess we’re a band now.” It was really organic and that is one of the great things about this band. We get together, have a good time, write really well together and just enjoy doing it and seeing what happens next.

It seems to be going great.

For the amount of energy that we put into it I am shocked with what we’ve been able to do and the response that we’ve gotten. We’ve been lucky to play with so many great bands, release 3 albums in 5 years, it’s like “Are you kidding me?” I feel really lucky.

Father Figures have only done a little touring, right?

We have gone to Tucson a couple of times. Played with the Meat Puppets there and also at a regular festival they do at Club Congress. We also went to San Pedro.

Was the out of town reception good?

Yeah. Especially San Pedro. They were like “where have you been all of our lives.” Like, compliments to the point of us feeling a little embarrassed.

Yeah, we’re just really lucky to have put this together. It’s always been for the right reasons. We’re not trying to get signed, not trying to make money. We’re just creating together.

Do you ever practice by yourself?

No, never! It’s always been hard for me to play the drums by myself. For me, the drums are an instrument meant to be played with other people. Playing alone is like working out and working out isn’t fun!

Are you critical of your own performance?

I know if I’ve had a good show or a bad show. Usually if it’s bad it has something to do with my body not wanting to move in a way that I want it to. I’ve had a lot of back issues and have been through a lot of body work and physical therapy, so there have been times where playing has been difficult.

Do you have any big influences?

When I was a kid I noticed certain drummers but I’ve never been obsessed with drummers or equipment. People sometimes want to know why I use certain equipment or sit so low but there’s nothing special to it. When I was a kid, I always loved Todd Barnes from TSOL and that really slippy style, super fast 8th note hand. I’ve always been into drummers who may be playing punk but you can tell that they could totally play jazz or just really switch it up. For me, it’s all about how all of the instruments work together. I’ve spent a lot of time over the years playing out and now, for me, it’s more about the creation process – the three of us getting together and writing songs together. Seeing songs taking shape is probably my favorite part.

Do you play anything else?

When I write for the band, I write on the bass. I can play a little guitar. I would like to play more guitar but the bass is easier for me to write on. When I pick it up, little things start coming together.

Yes! That’s one thing I have always wanted to do. I’ve been working with Dephinger and going to be working with Man Hands and the Smoke Bombs. I’m really excited about it; I love being in the studio.

We had Bobby give us a couple of his favorite moves just for you Yab Yummers: