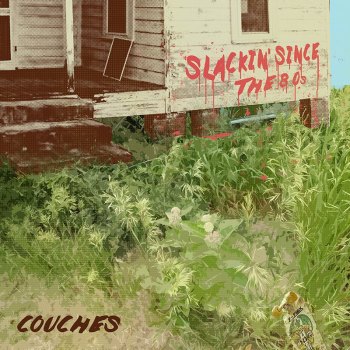 Most of the time, a band’s name doesn’t mean much. Not so for San Francisco’s Couches, whose brand of fuzzy indie-rock seems tailor-made for people inclined to sit around on a sofa all day. Preferably a sofa on a sunny patio. Preferably with a good buzz on.

The band’s debut EP, Slackin’ Since The 80s, is 9 songs and about 22 delightful minutes of strummy guitars and fuzzy basslines, topped by the gentle tenor of guitarist/vocalist David Mitchell.

The band’s lightly distorted sound and tuneful vibe calls to mind current garage revivalists like Harlem and King Tuff, but there is a lot here that recalls the Kinks-worshiping slacker rock of the 90s. I’d be pretty surprised if the guys in Couches didn’t have a few albums by Teenage Fanclub, Sunset Valley or the Young Fresh Fellow on rotation in the van during their endless tours.

The gentle guitar-based “Intro” kicks off the EP, before sputtering out, giving way to the driving “Train of Thought.” Full of woozy, funhouse guitars, the song’s lyrics point to the band’s laid-back life philosophy, with Mitchell singing “People care about the things you always seem to say/That’s because you’re always saying the same old thing/You are lame.”

The first half of the EP finds the band sticking to their more amped-up sound, including the great “Thinkin’ About Money” or “Infatuation.” These are the kind of effortlessly catchy tunes that seem to float by at first, but then you end up singing them to yourself a few hours later.

The band’s EP is out now on San Francisco’s 20 Sided Records, and cassette tape through Tempe’s Rubber Brother Records. Listen for yourself here.