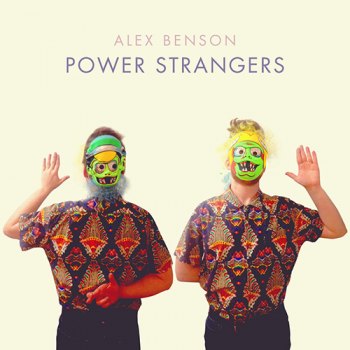 Would you think it impossible to produce a whole album in just one day? Well, Alex Benson did just that. And the result, Power Strangers, is pretty stellar too. This multi-instrumentalist (from such known acts as Rough Tough Dynamite and Confetti Club) has thrown down his gauntlet and raised the musical bar. Sure, it may not be music to change the world, but with 10 solid tracks each containing unique melody and voice, maybe it is.

On Monday, February 16, Alex posted on social media: “Alright, I’m gonna write and record an album from start to finish today. I’ll report back with the results. Smell ya later!” We were all aghast. Was this guy serious? Sure, he’s taken on new sonic territory before but this seemed preposterous.

A “14 hour session from 9 AM to 11 PM” saw the album written and recorded. And on Tuesday, February 17, the album was available for download through Bandcamp.  My god. Using live drums, guitar, bass, omnichord, ukulele, lap steel, banjo and synths – lots of synths – Alex created his alternative/experimental/indie/psychedelic/power pop in seemingly record time.

Power Strangers opens with “Head On Straight”, a fun, pop ditty over a playful rhythm. The distorted, stretched-low vocals add much originality and charm. The next track, “Major Flotation” featured Alex’s cat: “She kept walking on my desk and meowing for that one so I just put it in the song, chopped it up and syncopated it.” Rad. “Any Better” is one of my favorite songs on the album. “Can you do any better than this? ‘Cause your life is a mess right now.” I envision the artist knee-deep in a project of this magnitude, self-reflecting and outpouring his innermost fears. Who knows, it may not be written about himself at all, but instead, Benson might be tapping into the universal struggle we all share. Now I want pizza rolls.

The next three tracks – stripped down “Bread and Butter”, digitally haunting “Beast Belly” and personal fav, “Oh No” add up to 4:19 of time – they just fly right by. If you take a moment to listen, you’ll hear Alex’s lap steel get a stellar solo on “Bread and Butter.” “Beast Belly” serves as the intermission, clearing the mind whilst allowing the audience to reflect and mentally prepare for what lies ahead. This all happens involuntarily of course and within the span of 48 seconds. “Oh No” begins with, “Born in the suburbs you never know what’s coming for you. Oh no. Oh no.” The banjo/synth combo works well here, and now I’m surprised I don’t hear it more.

“Stay Okay” picks the mood and tempo back up with funky keys and satanic sounding back-ups. At 53 seconds it’s a shorty but goodie. “Magical Mutation/Aerate” features more of those fantastic synthesizers.  “I love synths,” Alex told me, “especially little cheap ones and old Casios.” And let’s not even start on software synths, Alex prefers to get his hands dirty (as it were) physically playing with his new tech. “I recently got a Pocket Piano from this really rad team called Critter & Guitari – they are just 3 guys in a room hand-making these really rad minimal synths, and there’s so much charm to it. I use that one a lot on this new record. And I finally put this one to use called the Mixtape Alpha. It’s the size and shape of a cassette with touch pads on it in a weird predetermined scale. I’ve had it for a year or so now and I finally made use of it!” Sweet.

“Monsters” is another favorite: “You’re just two monsters, wrapped up in a head. You make a decision day to day driven by monsters.” With it’s low-key drums, guitar, bass and keys, it gives off just the slightest hiphop feel. It also reminded me of the cover so I asked Alex about it. He told me that “Monsters” and many of the other songs on Power Strangers were about “having two forces pulling in different directions in your head all the time. There’s a good side that you’re proud of and feel good about and a bad side that makes you do and say selfish things that you try not to think about. We all have both sides but it just depends on our awareness and control over them. Stuff like that.”

The album closes with the angelic “29th Scroll 6th Verse.” With his lap steel in front of a choir of himself, Mr. Benson elates the listener into a false sense of security before the prophetic scroll is read: “Beware the beast man, for he is the Devil’s pawn. Alone among God’s primates, he kills for sport or lust or greed. Yea, he will murder his brother to possess his brother’s land. Let him not breed in great numbers, for he will make a desert of his home and yours. Shun him; drive him back into his jungle lair, for he is the harbinger of death.” Now don’t worry, Alex hasn’t suddenly traveled fast down the pessimistic roller coaster, it’s simply a quote/sample from Planet of the Apes – sure caught me by surprise though!

Check out Power Strangers here. Keep in mind it was completely recorded, produced, and uploaded within 24 hours. As you listen, think about your life and how well you spend your time.