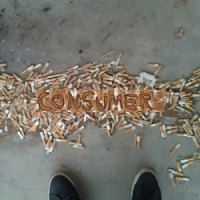 The 3-piece punk outfit from Phoenix known as Consumer has some mighty fierce musical prowess to throw your way. Even though Demo 2015 is just that – a demo – there is some serious skill and raw energy on these tracks that make them worthy of your listening time. The demo opens with “Demons” which, like the following track “Vice Grip”, has some serious fist-pumping call-and-response potential that make them perfect for punk crowds that don’t avoid the mosh pits. “Smoke” integrates some drone for that touch of modernity. The closing track, “The State”, reminds you what the band is all about at its very core: anti-capitalism. Hell yeah. Get all riled up with these early tracks from Consumer – a band, I hope, we’ll be hearing a lot more from. Listen here. And, while you’re at it, mark your calendars because Consumer will be performing at 51 West on March 26th with Detached Objects (another personal fav) and DRAA. More info on that event here. 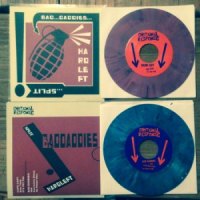 Flagstaff label, Emotional Response, released this split EP on limited edition (color) vinyl back in November, but lucky for us, there are still some copies available because I was a little late cluing in to this local label. Bad Daddies and Hard Left are both bands from the Bay Area, but I can definitely see why they were selected to appear on this split release: both are badass. Bad Daddies are as fierce as they are fun. They kick off the album with the twenty-second track, “War”, before launching into two full tracks. “Festering Brine” by the Bad Daddies is my favorite track from the release, but Hard Left delivers some powerful punches with “Stay True” and “It’s Not You”. Hard Left has a gruffer punk sound reminiscent of the genre’s earlier impulses. You can still get your hands on the limited edition vinyl if you order sooner rather than later and the split is available for preview from Emotional Release Records here. 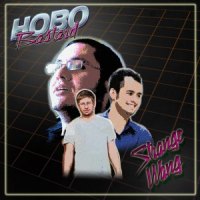 Self-described as “Four Shitbags from the Desert”, Hobo Bastard out of Tempe has a throwback pop punk sound that has just the right amount of kitsch to make this totally acceptable. Stange Wang came out in December of last year and was recorded at FCStudio also out of Tempe. There is a healthy dose of irony, no surprise given the album’s name. Coming in at a healthy thirteen tracks, Strange Wang opens with “Wayne’s World 3” – a track I’m pretty sure has nothing whatsoever to do with the Wayne’s World cinematic enterprises. After 13 tracks, I found the album starting to wear a little thin. I wanted a little less drone on the vocals and a little more from the music, but maybe that’s just me. Listen to Strange Wang from Hobo Bastard for yourself here. 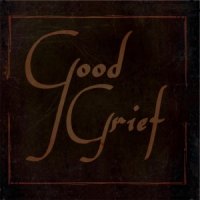 Good Grief is ready and willing to prove that punk isn’t dead by making relevant recordings that seek to shake the very confines of the genre. The band describes their style as “A refreshing mixture of Indie, Alternative, and Punk music”, but I would argue that what they’ve really achieved is there own unique brand of pop punk, a genre that has been stigmatized in the wake of the late 90s/early 00s. There is a sense of hurry, almost of desperation, on the tracks found on Punx Not Dead, but that might be more a matter of timing than design. Listen for yourself here. Word has it Good Grief already has some new recordings underway so we can expect to hear more from this band.