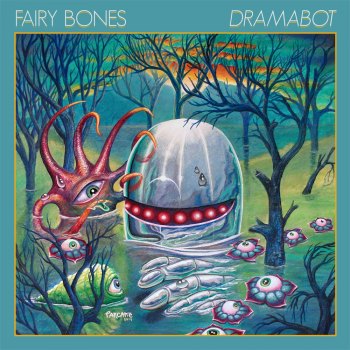 For me, nothing has been more anticipated throughout the past year than the arrival of the new Fairy Bones album, Dramabot, which was released on January 31st at The Rogue Bar in Scottsdale. OK, maybe Robert Cuica’s (the band’s guitar player) Ab Workout CD, but maybe that’s just me … I’m happy to say I got Dramabot early and it’s terrific.

But all selfish washboard ab dreams aside, and all hyperbole set in the corner for a deserved “time out”, the album is 12 tracks of delectable, danceable delights.

And, while there will be so many (great) reviews of this record, instead of a critical write-up, you know, track by track, chord by chord, I thought I’d take a different spin (get it?).

So, here’s a couple reasons why this effort from one of the hardest working bands in not only the Valley, but the West – a band that has successfully filled venues from across the country and has made friends and fans alike from said venues – deserves your time and attention.

You: Why should I listen?

One word: Chelsey freakin’ Louise. The lead singer and songwriter of the band has the caterwaul of Gwen Stephani, (yeah, it’s been said before), and a range that goes from an emotional whisper to an all out rage like on the track, “Jack”. Her writing is as catchy (in a good way) as they come. Quite honestly, no fooling, if she isn’t the top lead singer in Phoenix and surrounds, she is near the top.

What you should listen for: The symbiotic relationship between the brothers Foos. The drummer, Matthew Foos, and the bassist, Ben Foos, are simply astounding. For you lovers of groove, their performance from track one to twelve is a treat.

Why the guitars are so awesome: The ‘Bones guitar player, the aforementioned Robert Ciuca, has a difficult role to play here: How to garner all the attention a guitar player wants but stay out of the way of the huge presence of Ms. Louise…”

Easy, I call it: Smash and grab.

Ciuca knows exactly when to get his licks in (and there are a lot of great hooks throughout the record), and when to hold back. That’s something to be admired and something A LOT of guitar players simply do not understand.

One more thing: Mr. Bob Hoag of Flying Blanket Recording. Really? Does this guy have like magical powers or what? Seriously. It’s one thing to hit the red button, it’s quite another to harness the energy of a band like Fairy Bones and get a sound like the one that is on this record.

Perfect listening for: Getting pierced or tattooed. Or a quiet evening at home with a bottle of Jack Daniels watching reruns of the X-Files on mute.