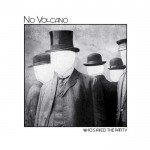 Who Saved the Party?

No Volcano released their first full-length album on Saturday at The Pressroom in downtown Phoenix to quite a hefty crowd complete with a mosh pit of thrashing teens on the underage side of the barrier; a barrier that I’ve learned to appreciate more with each passing year. Who Saved the Party? marks not only a first recording effort for the band, but also a first for their label, Onus Records, based out of Sunnyslope. From the opening track “Tribute”, the album establishes itself as something worthy of singular attention and that feeling doesn’t diminish throughout its entirety. No Volcano delivers clean garage rock that skips over 25 years of indierock to draw a direct lineage to the genre’s earliest (and perhaps best) days. No Volcano has a style that oscillates within the parameters of genre to incorporate other sounds, exhibiting psychedelic- and pop tinged moments. The result is a diverse collection of tracks that all work together on Who Saved the Party? to create one cohesive album. “The Spoon and Straw” has a summery, beach-time feel while “Historian”, my personal favorite, is a little darker and a little grittier. “New York Drugstore” has a psychedelic hue that is decidedly apropos. You can (and should) listen to Who Saved the Party?  through Onus Records here. And, if you haven’t already, check out the music videos No Volcano has released for the album. One of them even made our Top 20 Music Videos for 2014! The band plans on making another music video this month with Troy Farah. We’ll keep you posted on that one! 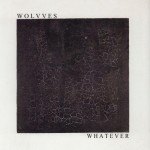 Wolvves unveiled their much-anticipated full-length at The Trunk Space last Saturday to an eager crowd. We’ve followed Wolvves since the beginning and they’ve developed a reputation for their smart, honest lyrics combined with a fun (and ruckus) musicality. Whatever, the latest (and apparently the last) effort from the band, still has those qualities but they are overshadowed by a push towards experimentalism that leaves the album feeling a little muddled. Other critics would, and have, disagreed with me so maybe there is something I’m just missing. But if I was not familiar with the band and somebody handed me their body of work, I would definitely not be able to correctly order Wolvves’ releases by date and would assume that Whatever was an early work.  That being said, a not-so-amazing Wolvves’ album is still better than many (if not most) of the records that come our way. Their primary concern is an artistic one rather than striving to maintain a safe course by delivering a re-hashing of what served them well in the past. In the long run, I believe Whatever will prove more of a transitional album for the band instead of emblematic among their discography. There are some varied opinions on the matter so I suggest you delve into Whatever yourself right here. And make sure you get out to see Wolvves perform live while you still can because rumor has it that the band broke up so there are only a couple of performances left. Alas. I have faith in Wolvves and the artists in its ranks. The band continually strives to push their sound beyond the boundaries of genre and I’m sure we’ll be hearing some exciting things in the members’ future endeavors.

The “gutter folk” of Flagstaff’s Wall-Eyed comes across as some serious rocknroll when “Wise Country”, the first track from their full-length release, rolls in. By the song “Exile”, you can hear those alt-country threads weaving their way back into the music. In tracks like “The Long Folk Revival”, the listener can discern hints of root rock in the Wall-Eyed brew. Kentucky Gentleman shows the band has been making steady progress since I first encountered them last year around this time when they released Grace Under Fire. During this past year Wall-Eyed has proven quite the prolific outfit. They released the seven-track Grace Under Fire in January, followed by a four-track EP titled I Want to Wreck Yer Car over the summer, and then another single in December before the new full-length dropped in January. What’s more, they seem to get better every time. Listen for yourself here. 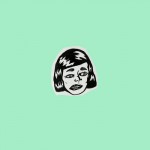 The five-track cassette released through Rubber Brother Records marks the first official release from Captain Samurai, a new band on the scene that made the Phoenix New Times’ list for “10 Best Bands and Musicians in Phoenix Under the Age of 21” back in December.  This three-piece hits that grungy garage rock just right. Nothing Part Zero is not a release I would describe as “pop” although the band seems to hold to that category. Admittedly, the beat and melody harken back to the early days of pop more than its current incarnations. Add to that a thick layer of angst and grime and you have Captain Samurai. Check out Nothing Part Zero here and get your own copy on cassette while they last! 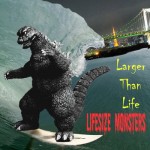 We weren’t too sure what we were getting into when we entered the “garage prog” of Lifesize Monsters. The band is comprised of Tom (Tompire) Blackwood, Mike (Bam Bam) Sversvold, and Steve (Stevil) Mutchler. But the affiliation with evil doesn’t end there. The music of Lifesize Monsters definitely takes some of the darker guitar and vocal effects commonly associated with metal and apply them to their own unique brand of rock. “Jethrine” is a personal favorite from the album that also features such tracks as “Godzilla Goes Surfing” and a cover of “Ho Ho Ha Ha Hee Hee Ha Ha (The Wallace And Ladmo Show Theme)”. Calabrese might finally have some competition in the monster-themed rock category. Listen to Larger than Life here.