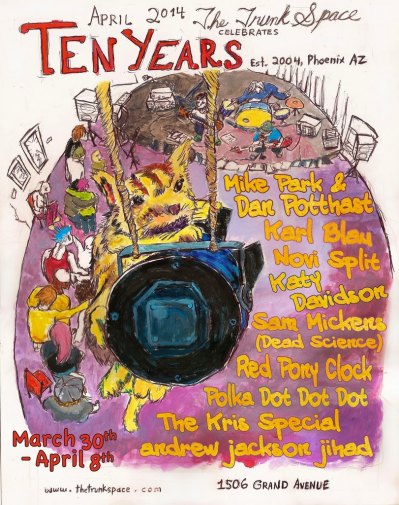 The Trunk Space commemorated 10 Years with the biggest (and longest) show anyone has thrown in these parts in quite some time if not in all of Phoenix history. The Indie 500 continued for 10 days (or nights) during which time a total of 500 songs were performed.

This past year saw many changes down at The Trunk Space. After 10 years, co-founder JRC moved on, but Steph Carrico still stands at the helm. And, after 10 years of sweltering summer shows, The Trunk Space added an A/C unit with the proceeds from a successful fundraising campaign – the same fundraiser that made the Indie500 possible.

Rumor has it that the folks of The Trunk Space might attempt a second Indie500 for their 11th anniversary in 2015, but this time they might try to have the bands perform 500 songs consequetively. The Trunk Space is brave for even thinking about tackling a scheduling challenge of that magnitude.

No matter how they choose to celebrate their next anniversary, we’ll be there. And congratulations to The Trunk Space for marking their first decade with a celebration we’ll remember forever.