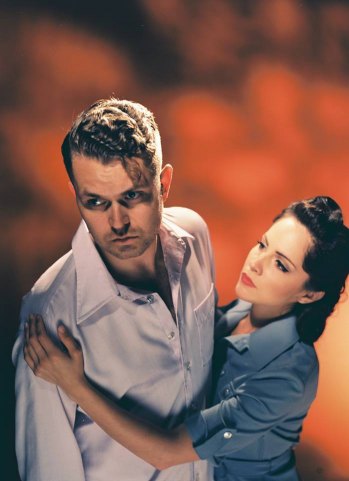 The electro pop duo outta Tucson known as Head Over Heart combines the musical efforts of Jordan Prather and Belinda Peters. These two movers and shakers have pushed their band beyond the confines of the Old Pueblo and into earholes everywhere. That might have something to do with Commerical Appeal Records, a label started by Prather that seeks an all-encompassing approach to supporting artists.

That seems like what it takes these days to launch a band from the local scene to the national level: an all-encompassing approach. Music is not just heard in the 21st Century but seen. We want pictures, videos, and maybe the occasional cute cat image thrown in for good measure. We’re an internet-savvy society and that means artists have to seek a multi-media approach to presention. That is exactly what Prather seeks out through Commerial Appeal Records.

That approached mingled with that glossy sythpop musicality of Head Over Heart and you just might have the winning combination. Commerical Appeal Records has a suave sense of style that Bob Hanshaw described as, “slick, sardonic, understated, professional” in his Tucson Portraits series (available here) and that style is epitomized in Head Over Heart.

There is music and then there is the music industry, two very different beasts indeed. Head Over Heart seems to be working on their business acumen to negotiate the waters of the latter and, for that reason,  they are this year’s pick for “Most Likely to Succeed”.

This year promises to be a big one for Head Over Heart. The band will be performing at SXSW and they’re also planning a tour in Mexico, including a festival in Hermosillo. Head Over Heart will also be releasing a new 7″ that we can all look forward to in early Spring. For more on Head Over Heart head to their website here. I also suggest checking out the band’s 2014 EP – I Believe You, Liar – here.