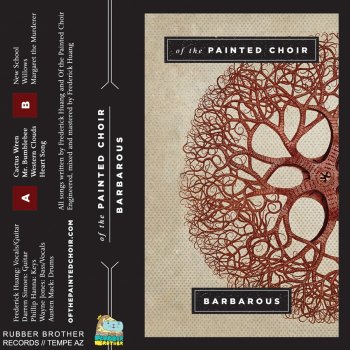 I was very upset to learn that the members of Of the Painted Choir, a Phoenix favorite, were going on their separate ways earlier this year when frontman Frederick Huang returned to Tucson to attend school. It seemed like only yesterday that Fred made the move from Tucson to Phoenix and started OTPC. Now that he’s returned to The Old Pueblo, Of the Painted Choir has seen its end, but before we saw the end, the band left us with quite an EP to remember them by.

Joining Huang is Darren Simoes (guitar), Phillip Hanna (keys), Wayne Jones (bass/vocals), and Austen Mack (drums), all talented players who help construct the wisely-crafted, effervescent pop of Of the Painted Choir. Some of those names you might recognize from other local bands like Twin Ponies and Captain Squeegee.

Barbarous was released last spring on cassette through Rubber Brother Records. The seven-track release features new favorite “Willows” and the OTPC live classic “Mr. Bumblebee”. Barbarous achieves a sweeping sense of beauty that carries the listener through picturesque musings. Fred Huang has proven himself as both a songwriter and a sound engineer of merit and both skills shine on the cassette.

We at YabYum became a little concerned for the future of Fred’s musical endeavors after some bastards stole a bunch of equipment (including his custom-made Jazzmaster), but the community has pulled together to help. A fundraiser is to be held at Club Congress on January 16th to help raise money (more info here). And, if you can’t make the drive to Tucson, consider making a direct donation here.

And, since we’re throwing links around, I definitely suggest heading here to listen to (and purchase) Barbarous. You won’t be sorry. That is, until you remember that the band is no more. Then you will know our sorrow.