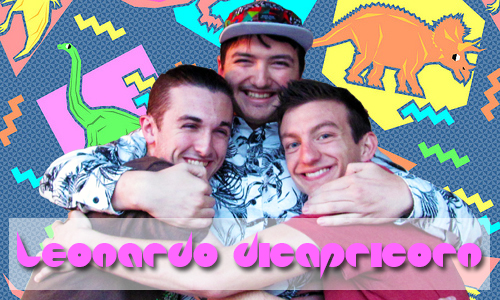 It was just one year ago that I first heard about a little band called Leonardo DiCapricorn. I’m always game for a clever name, a name I heard scored a booking Robbie Pfeffer of Rubber Brother Records on its merits alone. But would the music live up to the cleverness of their name? With the January 2014 release of Vice-Versace just a few months after the band formed, we received a resounding “Yes!” to our question.

The first single from the band, “J-No”, immediately secured our following. Combining weird punk grounded in rocknroll with wicked turn of phrase, Leonardo DiCapricorn repeatedly proved that they had so much more to offer than a clever name. They quickly followed Vice-Versace with The Black 4Loko Dolphin E​.​P. and then a split cassette through Rubber Brother Records with Red Tank! over the summer called Nerf War. Busy year for a new band, but Leonardo DiCapricorn gave us something new that we didn’t even know we wanted.

The band kept busy over the summer. They released Suite 4, a few tracks they recorded at the now defunct Parliament in Tempe. They also went on a short tour with hometown favorites, Playboy Manbaby. In the Fall, we got a new track conveniently titled “NUNU“.

With such a busy first year, we can’t wait to see what 2015 will hold for the band. Make sure to check out the video for “J-No” below!