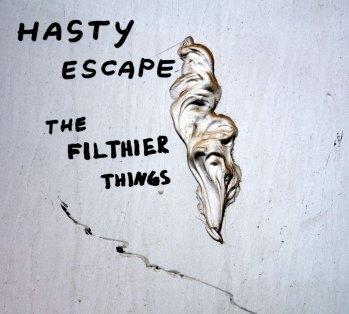 From the start of The Filthier Things – the November 2014 release from Hasty Escape – fans of Americana know their in for something special. We’ve been waiting for this album ever since the band released their first single “American Cheese” last summer in anticipation for the album in the works.

Hasty Escape create an engaging style combining indie-folk with a western panache for a uniquely flavored Americana. They then add the accomplished musicianship of their chosen players: Max Knouse (vocals, guitars, pedalsteel, music boxes), Matt Ventre (guitars, vocals, lapsteel), Alex Kyhn (electric bass, upright bass, synths, vocals), and Ryan Anthony (drums). I mean, come on, the list of instruments reads like a MIM exhibition.  The pairing of musicianship and style renders an album that is captivating, artistic, and charmingly salt-of-the-earth without being quaint.

The Filthier Things comes across as a singular endeavor with its seamless continuity. The songs move into one another in a way that tells me these tracks weren’t piecemealed together, but thoughtfully constructed. Similarly, the emotional content suggests restraint giving the music a gently moving quality that comforts more than it confronts.

“Overgrown, Looking Mean (I Know)” remains my favorite track on the album but there are some serious contenders for that spot including “Oh Lazy Eye” and “Ain’t Really that Bad”.  Songs like “30sec. Rule” push  the confines of genre without disrupting the aforementioned continuity. The band recorded and produced The Filthier Things on their own using bassist Alex Kyhn’s home studio. The album says a lot for what one can accomplish beyond the studio setting in this day and age.

The Hasty Escape plans on offering The Filthier Things on cassette through Rubber Brother Records next month. Fans can also get excited about the band’s plans to release a couple music videos this year. In the meantime, I suggest spending some time (or more time) with The Filthier Things. You can stream and purchase the album here.