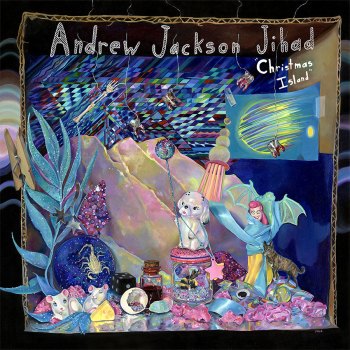 “Open up your murder eyes and see the ugly world that spat you out.”

And so begins “Temple Grandin”, the first track from Andrew Jackson Jihad’s 2014 release, Christmas Island, an album that is both beautiful and devastating. From beginning to end, Christmas Island puts the listener into a reflective mood with its brutally honest lyrics and that AJJ-blend of pain and humor. The album will leave you pensive, perhaps with a convoluted sense of aniexty and amusement, and you’ll want to listen again.

And I, for one, perfer my breakdowns to be set to a beat I can dance to. Andrew Jackson Jihad gives you just that. Just listen to “Deathlessness” and tell me if you don’t want to dance. There is an irony there. Of course, I consider “Linda Ronstadt” to be one of the most heart-wrenching tracks from Christmas Island. There it is again, amusement juxtaposed with anguish.

Christmas Island  is a must-hear album of 2014. You can preview the album here as well as purchase it from SideOneDummy Records. “Kokopelli Face Tattoo” is an instant Andrew Jackson Jihad classic and Phoenix’s own Suzanne Meow Meow Falk painted the image that graces the cover of the album art (read more about that here).