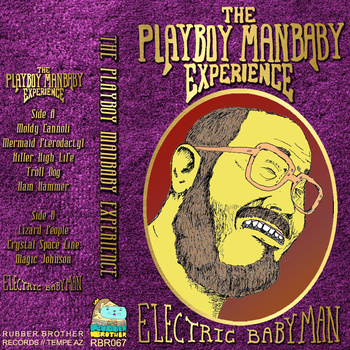 As you well know, our Awards Month every January is our time to acknowledge the albums that really helped define the year for us. And, every year, we reserve “Album of the Year” for that one album that has really marked the year: the one we gave to friends, the one we took to the gym and played in our cars, the one that receive more radio requests on our show than any other. For us, that album was Electric Babyman by Playboy Manbaby, or “The Playboy Manbaby Experience” as they are listed on the cassette tape the band released through (no surprise) Rubber Brother Records.

Playboy Manbaby has a been a favorite on the local scene ever since their 2011 debut and, in the time since, we’ve seen the band growing along with their fanbase. Back when the album came out last summer, we declared it, “Easily the band’s greatest album to date, Electric Babyman offers eight tracks of fiery punk rock for all you high-strung kids out there.”

The band returned to Audioconfusion to work with Jalipaz on the recording. Combining studio clarity with the snappy Playboy Manbaby style and improved lyrical prowess really made for a memorable release. The album was released, btw, to a sold-out crowd at the Crescent Ballroom, not the first or the last for Playboy Manbaby.

You can read our original review of Electric Babyman here. And don’t forget to check out the album if you haven’t already. Listen here.