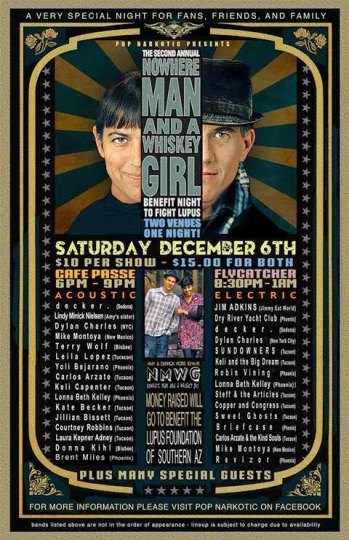 In life, Amy and Derrick Ross of Nowhere Man and a Whiskey Girl embodied the heart and soul of music in Arizona. They were the epicenter of a circle of friends, fellow musicians and fans that grew exponentially over the years as the band played across the state and beyond. Their legacy culminated into a spectacular outpouring of love, support and music at the recent “2nd Annual Benefit For Amy and Derrick Ross: A Celebration of the Lives, Love, and Music of Nowhere Man and a Whiskey Girl,” with proceeds donated to the Southern Arizona Lupus Foundation.

After Amy’s death from a lifelong battle with lupus and Derrick’s subsequent suicide, the concept for a benefit concert came from Jimi Giannatti of Pop Narkotic Posters and Photography, who met the Ross’ after moving to Bisbee. Giannatti explains how he came to know them: “On my second night in Bisbee, my friends took me to a local joint named Hot Licks where Nowhere Man and a Whiskey Girl were playing and I experienced the same conversion that I would later witness hundreds of others like myself go through with their first Nowhere Man and a Whiskey Girl show.”

He soon became one of their closest friends and a tireless champion of their music, saying “I was knocked out by Amy’s world class voice, impressed by their musicianship, captivated by their between songs banter, and wowed by their effortless ability to hopscotch their way through their set mixing originals with any number of different genres.”

It’s easy to see why the Ross’ became fast friends with Giannatti, an affable gentleman, wise beyond his years, with a knack for making the most insane plan seem feasible, a quality that became useful when putting on a benefit concert of this scale.

Giannatti was inspired to create the 1st annual benefit concert last year as a way to deal with the sudden loss of Amy and Derrick. “Looking back I realize now that it was a mixture of needing a way to focus my grief, anger, confusion and shock from their sudden departure into something that made sense and that also could bring comfort to so many of their friends and fans that I knew were feeling the same sense of tragic loss.”

This year’s event was even bigger than the last, with Café Passe hosting the acoustic sets and Flycatcher hosting the electric sets. 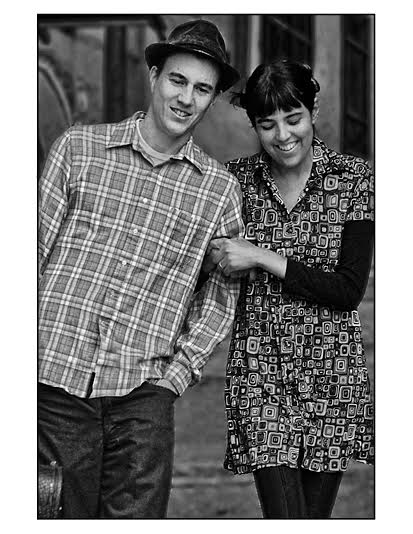 With almost 30 musicians playing between both clubs, what could have been a logistical nightmare ran like a well-oiled machine. Giannatti was quick to point out that planning the benefit was “a huge collaborative effort that involved a number of people. I really have to single out Keli Carpenter, Bryan Sanders and Sarah Megga for their work. Almost everybody we’ve reached out to has said, ‘Yes, what can we do to help?’”

The extensive lineup covered every facet of Derrick and Amy’s musical legacy, from briefcase to Bisbee Slim. Before Nowhere Man and a Whiskey Girl, they were in the Phoenix-based quartet briefcase. briefcase’s set at Flycatcher was the first time they had played since the band split up in 2002. Original members Mark Breen and Josh McFarland were joined by Breen’s wife Jessica and special guests such as Sweetbleeders’ Robin Vining and Fatigo’s Mike Montoya and Anjalynn Carlson. Their set echoed a common theme of the night with different bands sharing many of the same musicians, fulfilling one of Amy and Derrick’s dreams of bringing musicians together, no matter their genre or locale, all united through music.

In his downtime, Derrick created an alter ego, Bisbee Slim, which showcased Derrick’s sublime humor through walloping hip-hop, in which he hilariously professed his love, bordering on obsession, for Beyonce. But Derrick was always sincere in everything he did and according to Giannatti, who was present during the inception of the Bisbee Slim persona, said there was so much more to it. “Almost all of the songs have semi-autobiographical references. Most of them have clips from home recordings and audio taken from videos of NMWG and their friends. He talks about break-ups and lost dreams, while also addressing his critics.”

At Flycatcher, Bryan Sanders channeled Bisbee Slim and led the band – Calexico’s Ryan Alfred on keyboards and samples, Brian Green from Leila Lopez’s band on bass and Flynn Salisbury on guitar – through a raucous set that would’ve have made Derrick proud. 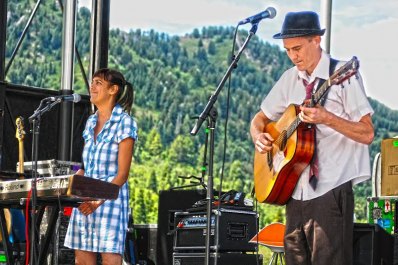 Over at Café Passe, Snow Songs performed one of Nowhere Man and a Whiskey Girl’s most beloved songs, “Tumbleweed,” with Yoli Bejarano and Genet Klasek trading off verses. They ended their set with a haunting cover of Gillian Welch’s “Whiskey Girl.” The song that gave the band its namesake starts off with the eerily prescient verse, “Nowhere man and the whiskey girl/They loaded up for a weekend in the underworld.”

The most poignant performance of the night came courtesy of Amy’s sister, Lindy Minick Nielsen, also performing “Tumbleweed,” but made even more special as it’s a song she co-wrote with Amy. Lindy related how the song came about through a ramshackle serendipity, a trait that punctuated the Ross’ life, explaining, “I wrote the words and then called in the heavy hitter (Amy) for the melody. She was driving and annoyed, but agreed to listen through it. I played the cassette on my stereo and held a hand held recorder up to the phone and captured the melody that she sang into the phone. She only went through the song one time.”

And now, even in death, people are still discovering the music of Nowhere Man and a Whiskey Girl, and by default becoming a part of their ever growing circle of friends. Due to the dedication of musicians, friends, family and fans, the Ross’ legacy keeps growing and concerts such as this will keep their memory alive, while raising money to help fight that insidious disease lupus, which took Amy and Derrick from us too soon.

For more information about upcoming Nowhere Man and a Whiskey Girl-related fundraising events, check out the Pop Narkotic Facebook page here or to make a donation in Amy and Derrick’s name to the Lupus of Southern Arizona, head here. 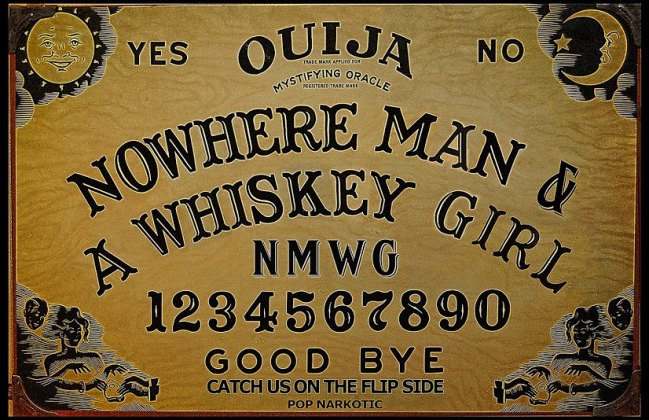