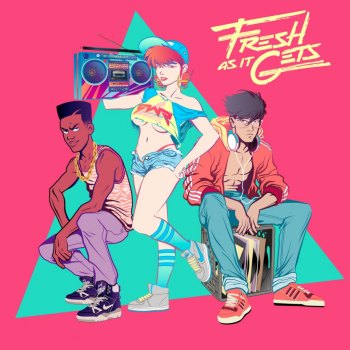 You know when life just beats the hell outta you and the only thing keeping you going is the sweet music you fill the the empty void between your ears with? That’s what Robots With Rayguns new album Fresh As It Gets has done for me in these past two months. Throughout the drudgery of office work, household chores of washing dishes or mowing the lawn, and long drives through nowhere New Mexico, Fresh As It Gets has kept this mind active and going. Going. GOING.

As the title implies, Fresh As It Gets is freakin’ fresh. We’ve covered Lucas Patrick Smith under his bitchin moniker Robots With Rayguns (RWR) for a couple of years now and Fresh As It Gets has clearly stepped RWR up the creative ladder. Better production, more collabs, and a keen eye for visualization and packaging take Fresh As It Gets well beyond a mere ‘bedroom production’ album and into the worldwide realm of ‘addictive electro’.

“RWR FM” opens the album and, after scanning the dial, a DJ informs us that we are tuned in to 101.3 WRWR, “As fresh as it gets.” Then suddenly, the driving kick of “One More Time” launches the listener into the 1980s inspired world of Robots With Rayguns. Think Beverly Hills Cop synths and Patrick Nagel paintings. “Summer Dreams”, featuring Keith Masters on vocals, tracks in at number three, and now we get a sense of what themes to expect on Fresh As It Gets. The outro Mr. Masters says at the end of the song sums up not only this track, but the album in general: “This some shit that make you wanna just throw some sunglasses on nah mean? Roll your blazer up. Put your hi-top Reeboks on. Get your tube socks on. Headbands, Wonder Years, ya dig? All that good shit man.”

The electro-jammin “Rhythm Test” has a super staccato feel with its mechanical vocoded lyrics and samplers. The off-time shaker and what sounds like someone chopping vegetables on a cutting board in the background only add to the swirling effect of this track. The synth-heavy “On The Groove”, with its main sample of “Hold you tight,” will have you head bobbing for sure, aching for the open road (if you’re not already on there).

“Get Over U” returns us to some wonderful vocals, this time provided by She’s The Queen. “I don’t wanna get over you, and I still got so much that I can prove. ‘Cuz when I get home and see I’m all alone, I think of you” is a tremendous hook and this airy pop song has the ability to stick in your head in the best possible way. The first half of the album finishes with “Electric Love”, an ode to classic electro sounds. Featuring a hiptastic break-beat and sweet, sampled vocals, this track gets me playing air drums every time.

Robots With Rayguns and Fresh As It Gets are definitely not in the current, mainstream realm of popular electronic music with it’s ever-increasing “4 Chord Songs”: this is more along the lines of B.W.H. and Baby Anne than Calvin Harris or Robin Schulz. Nu-disco, synthpop, even throwback dance are very acceptable terms as to what’s being created here and I, for one, dig the hell out of it. 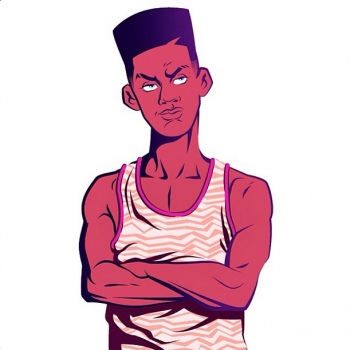 After the 45 second interlude “F.R.E.S.H.” leaves the listener wanting more of it’s fresh sound, “Hold On” rolls in with another round of vocoded, sample vocals on top of a stylin’ break-beat. When the bass line carries the mode change in for the verse, my eyes close and I find myself lost in electro bliss.

“Touch”, featuring The Hair Kid, features my favorite line of the entire album, “So while you’re waintin’ for the drop, we busy making emotional Gameboy music.” I cannot think of a better term in which to describe the 8-bit processed, chip-tune genre of music that has emerged as of late, it’s beautiful. “Touch” is a hip hop track with raw, emotional honesty: The Hair Kid’s heart-on-the-sleeve lyrics mixed with RWR’s downplayed TR-808 inspired beat prove to be a winning combination.

The longest track on Fresh As It Gets is the breaks tune “Freestylin'”. At a little over five minutes, this is the perfect track to have on your workout/gym playlist (remember what I said earlier about active and going?). The vocal stylings of Ghosthouse are featured on the next song, “Unicorn”, another favorite that reminds us, “It doesn’t matter what you’ve got, it’s what you’ve got goin’ on.”

I can’t go any further reviewing this album without mentioning the stunning visuals of Fresh As It Gets provided by Reno Msad. A master of many styles, I believe Reno captures the look and feel of Fresh As It Gets perfectly. With Mr. Msad’s artwork showcased on every Robots With Rayguns webpage from Bandcamp to YouTube, it’s hard not to completely associate Robots With Rayguns music with Reno Msad’s art. And that’s pretty cool.

“Street Talk” keeps the party vibe going strong. Bass heavy, this track has a washed out, practically static snare hit that’s just the shit. “Down To The Floor” doesn’t let the upbeat feeling fall for a minute. The final breaks track, it has the ability to keep pushing you forward, completing any task which requires getting done. The album closes with “Right Through Me” featuring the vocals of Patrick Baker, who also appeared on RWR’s second album, RWR. A sweeping, synth-driven number, it ends Fresh As It Gets stoically as it fades off into the sunset.

My biggest complaint of Fresh As It Gets is that since it has so monumentally surpassed it’s predecessors, I now find difficulty in listening to RWR’s prior albums. Don’t get me wrong, I still jam out my favorite tracks all the time, it’s just that I don’t get the same feeling I now get from having so intimate an experience with the better sounding Fresh As It Gets. My only other gripe is that I don’t believe RWR performs live anywhere and that’s a shame, I wanna shake this white booty to some fresh as fuck electro out on the dance floor somewhere.

Lucas Patrick Smith has once again outdone himself in the realms of Electronic Dance Music. If you like your electro bass kickin’ and synth heavy, this is the album for you. Check out the video for “One More Time” below. Listen to and buy Robots With Rayguns new album Fresh As It Gets on iTunes or Bandcamp and check out the RWR website for merch and more here.

Robots With Rayguns
“One More Time”