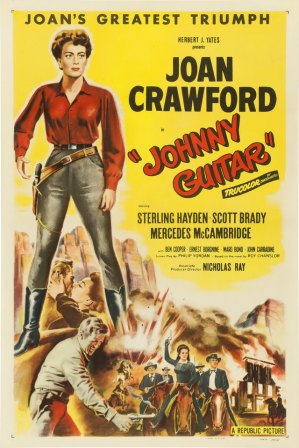 For those of you that might not know, I am a card-carrying member of the Phoenix Art Museum. And, in the next couple of months, I plan to use it to its fullest advantage with the launch of Another Western, a new film series hosted by the museum.

In conjunction with an upcoming exhibit at Phoenix Art Museum titled The West Select, the film series is schedule to run through the month of November and December. The series known as Another Western will feature four films and, I must say, as soon as I saw the movies selected I was ready to sign up for the whole bunch.

Perry Allen, the Film Program Coordinator, gathered some real humdingers for this upcoming series. These films take the Western and dissolve the boundaries that traditionally define the genre.

Kicking things off is Johnny Guitar (1953) directed by Nicholas Ray and starring Joan Crawford. The film was described by Roger Ebert as “one of the most blatant psychosexual dramas ever to disguise itself as a Western”. How does that not sound like a wonderful Saturday afternoon? The showing of Johnny Guitar takes place this Saturday, Nov. 9th, at 1pm.

The next film in the series is Meek’s Cutoff (2010) starring Michelle Williams, Bruce Greenwood, and Paul Dano; a film I loved for its realistic portrayal of a wagon caravan to the West. This is not a game of Oregon Trail nor will you find any Hollywood perversions of Native American culture. The film’s meandering pace is accomplished beautifully. If you haven’t seen Meek’s Cutoff, I suggest heading down to the November 16th showing, also at 1pm.

Two-Lane Blacktop (1971) is one of my favorite movies ever. Like, ever ever. Starring James Taylor, Dennis Wilson, and Warren Oates (and, yes, of musical notoriety), the film pushes the boundaries of what might be called a Western, but it decidedly adheres to a Western mindset and ascetic that warrants consideration within the confines of the series. Two-Lane Blacktop will be shown on Dec. 7th.

And, finally, Jim Jarmusch’s Dead Man will close out the series. Starring Johnny Depp, Dead Man offers a dark and surreal vision. Prior to the screening on Dec. 16th, ASU Professor of Art History Julie Codell will host a brief discussion about the film.

Tickets to the films in the Another Western series run $5 for members and $10 for non-members. And I definitely recommend sticking around to check out The West Select: A Western Art Invitational Sale and Exhibit. More info can be found on The West Select here. For a complete list of events at the Phoenix Art Musuem (including films) head here.