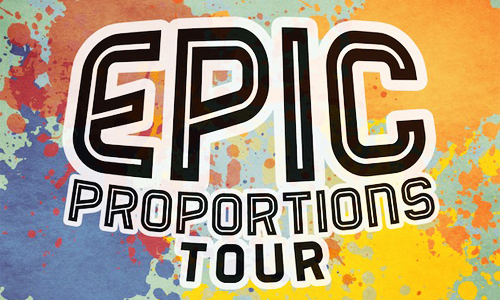 It begins with a few friends jamming in a garage, putting together a band. Often from there, it is a struggle to build a fan base – playing loud, crowded bars for a few dollars in tips. It can be a long, hard road up into the spotlight.

Peter Sotos, owner and co-founder of the Epic Proportions Tour, wants to change that.

According to Sotos, the Epic Proportions Tour provides a way for unsigned bands to make a living touring the country. He pointed out that traditionally, even artists with major label support usually lose money on their first few tours.

Sotos and co-founder Gabe Kubanda found a way to tackle the musician’s ultimate question – how can a musician make money touring, instead of going bankrupt in this cash-stretched economy?

“We love bands – we are about helping bands, at the end of the day,” Sotos said. “We’re in a business, we make money, but we’re not in business to make money off bands. Why should I take nickels away from them?”

When Sotos first decided to jump into the music business, he did so with both feet.

It did not take long into managing artists before he realized every artist was trying to make it in bars, gig by gig – and how wrong it was.

“Every successful signed band is touring,” Sotos said. “They are sleeping on couches, but traveling around, touring. I said, how can I jump start that model? First, I learn the touring business. How? Take some of my bands on tour.”

As touring with his groups progressed, Sotos got his bands a vehicle, at first taking old sofas and installing them into an old school bus.

“We had no money for gas,” he said of the first tours. “I spent all my money welding bunks and furniture into the bus. Three week tours… it was awful, but we learned a lot. With each new tour, we learn a lot: adjust, adapt, and overcome.”

But before long, their reputation growing with every show, a record label heard about Sotos and the tour, offering to comp rooms and pay for gas.

Sotos was in Las Vegas during one such tour when he met Gabe Kubanda at a record label party.

“I picked his brain,” Sotos said of Kubanda. “We talked, we really hit it off. We had a common business sense, our goals are aligned. We are like two different particles; but we circle around each other, and make stuff happen.”

Before long, Kubanda called Sotos back, asking to join in on the next tour. They sat down, and after a great deal of planning, the Epic Proportions Tour was born.

Now EPT is featured at festivals, amusement parks, high schools, colleges, and military bases across the country, and picking up sponsors left and right. Want to submit your group’s music to EPT? You’re not alone – EPT gets submissions from groups all over the world.

“We get close to 3,400 band submissions every tour, 3 times a year,” Sotos said. “February through November, we are constantly on tour. You never know where our tour is going to go. It takes us about a week to go through submissions. We want to see marketing image, stage presence, the whole package. First off, the band has to have that special magic. If we find a group and we love them, we’ll call them and work it out. We don’t sell tickets, we don’t make them sell tickets… they just hop on our bus and we play shows.”

The Epic Proportions Tour has been featured at major music festivals and events, including South by Southwest (SXSW), CMJ, NAMM, and the Vans Warped Tour. At these events, EPT holds a “Smart Touring” discussion panel, sharing tips for touring bands to get ahead.

“We try to teach bands how to tour well, and not repeat all the mistakes we made,” Sotos said. “We have some really heavy hitters on that panel – it’s standing room only.”

EPT has also begun to spread the educational aspect to their high school and college shows, including a question and answer session with students.

“It’s definitely possible to have a career in arts,” Sotos said. “I don’t care what it is; if you want a career in something, there are probably people as crazy passionate as you who have found a way to make it work. I mean, look what we did: the plan wasn’t valid, but we were crazy enough, we were going to figure it out. So you start wrapping your brain around it, and you figure it out.”

One group well on their way to making it work is the high-energy rock group, Hour 24. Currently touring as part of the Epic Proportions Tour, the Michigan-based quintet has experience touring on their own, but EPT has blown away all their prior experiences and expectations.

“This tour brings it to a whole new level,” said Dan Quigley, guitarist for Hour 24. “We do a show, and by the time we come home, there are 100 new fans of our band online.”

Quigley said the group first heard of EPT through an advertisement on ReverbNation.

“We thought, this is exactly what we need, the exact demographic… It’s worked out really well for us. Number-wise, this tour is already so huge, and we’re only halfway through. It’s crazy – it’s a lot better experience.”

Sotos said EPT had a list of critiques and feedback for Hour 24 once they first submitted their work, but the band took the comments in stride; on their website, social networks… they fixed every point Sotos said needed help.

“We are in it to win it; you’ve got to do what you’ve got to do,” said Hour 24 drummer Mike Neumann. “You have got to work at that. If you like what you do, it’s easy. It’s a lot of fun, if you put that effort in, and the crowds love that. It doesn’t matter if it’s 5 or 100 people – regardless of outcome, it’s still the experience of getting better at your profession, perfecting your art.”

Hour 24 guitarist and backing vocalist Cody Sizemore agreed, saying for a band to improve, they need to put egos aside and be willing to make changes.

“If a band writes down everything they are good at and everything they still need, you can’t just sit there and wish for it to change,” Sizemore said. “You need to act on it, take it one step at a time.”

Taking issues one step at a time is true for everything, but thanks to Sotos and the Epic Proportions Tour, Hour 24 – as well as countless other bands EPT has taken on – is already off to a great start.

“We continue to grow every year,” Sotos said of EPT. “No one believed in us at first, but we’ve proved a lot of people wrong. It’s been an amazing ride, and it’s only going to get more amazing.”

For more information about the Epic Proportions Tour, the bands involved, or to submit your own group, visit their website.