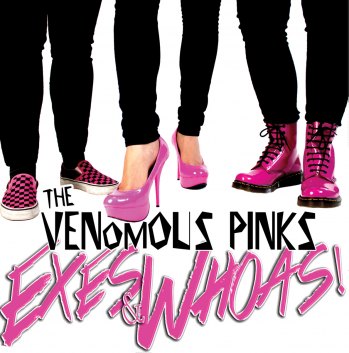 Last Saturday, The Venomous Pinks unleashed their new EP to a crowd of expectant fans at the Yucca Tap Room in Tempe. The Phoenix punk rockers have been making the local scene a little bit rowdier since they hit the circuit a few years ago. This new EP, Exes & Whoas, marks the second release from the band and, let me tell you, the Pinks have stomped leaps and bounds in just these few short years.

Their 2013 EP (Three in the Pink) revealed a feisty punk band with tremendous promise. Exes & Whoas shows that promise realized. All five tracks are fierce and fun. And perhaps more importantly, they are delivered in slicker style, but with the fiery energy we’ve come to expect. Exes & Whoas makes Three in the Pink sound a bit like amateur hour. I don’t know if it’s the result of their heavy performance schedule, but the years of heavy rocking has transformed The Venomous Pinks into true professionals. And, as I sit here writing this on the Saturday following the Friday night release, I can honestly say I’ve listened to this album nearly nonstop since I got my hands on it.

For quite some time now, The Venomous Pinks have been making their way as a power trio featuring Drea Doll on guitar/vocals, Gaby Kaos on guitar/bass/vocals, and Jukie on drums, but they recently added Corrie Zazzera on guitar after a month of summertime jamming. Earlier that same summer, the trio recorded Exes & Whoas at Villian Recording with Byron Filson in North Phoenix.

The EP opens with “Never Say Never”, a track certain to have you fist-pumping and shouting on repeated listens. Roger Miret of Agnostic Front joins in on the vocals for “Never Say Never” as well as the song “Do You Wanna?” Drea and Jukie helped with backing vocals on Miret’s last release and Drea decided to ask for some help in return.

By “No No No”, the second track, I was hooked. Exes & Whoas is badass. It lives up to the reputation The Venomous Pinks have acquired from their active involvement in the local punk scene: hard-working and hard-rocking.

Get a hold of your own copy here: Exes & Whoas! – EP – The Venomous Pinks!